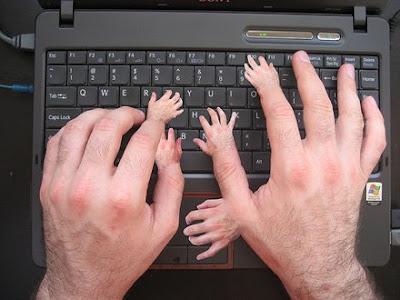 Number 9. "The Art of the Blog"
Things are happening off the ice, too. Over the past couple of seasons there has been quite a growth in independent online blogs and an evolution in the relationship among clubs (many that have their own blogging footprint), traditional media (also with their own blogs in many outlets), and the body of independent blogs covering the sport.

The Capitals have as sophisticated a group of independent bloggers as you’ll find in the sport. If you look at rankings, chances are that Caps bloggers are going to be well represented. Look at the blog roll over at AOL Fanhouse, and you’ll find three Caps-centric blogs listed. Over at Ballhype, you’ll find that four of the top-50 NHL blogs belong to those that follow the Caps (no team has more) and the Caps' blogs among the most popular. Find a site that ranks NHL blogs, and chances are, you’re going to find the Capitals are well represented.

And, even with as firmly established a hockey blogging community as the Capitals enjoy, the number is increasing. You can start with the “Hockey Trinity” of Off Wing Opinion, Japers’ Rink, and On Frozen Blog, but there are a number of other talented contributors, too numerous to mention in their entirety. But, if you’re not reading “A View from the Cheap Seats,” you’re missing some unique perspectives on the Caps and hockey in general. If you don’t read “Alex Ovetjkin,” you’re missing out on information on the Caps’ star forward that you probably won’t find in other places. And then there are two more recent additions that already are must reads – “The Red Skate,” coming to you from The Big Apple, of all places, and “Tuvanhillbilly,” which provides something of a Russian emphasis to Capitals coverage – entirely appropriate given the number of Russian players skating for the Caps. A lot of folks with interesting things to say have joined the community in the past 12 months, and if space and time prevent all of them from being mentioned here, a lot of them are over there in the right margin. You should take a moment to read them.

Then there is the presence of the owner himself blogging on the Caps (in addition to a lot of other topics). Try and find another NHL owner who blogs on his own, we’ll wait…

…finished? Didn't find many, did you? And that doesn’t even address the manner in which Ted Leonsis has led the way in providing access for bloggers to the places only traditional press have been credentialed to go. If you click on the links of some of those blogs over there in the right margin, you’ll find a fair number of entries that include interviews with players and staff, videos, and other stories that challenge the notion that only the traditional media can be a credible source of hockey news and information. That also has served to push those traditional media outlets to accelerate their own efforts at real-time posting and providing information (roster updates, injuries, lineups, breaking stories) that doesn't lend itself to "deadline-focused" reporting.

And that has led to something of a next step in the evolution of the blog. There seems to be something of a consolidation of sorts that has begun with blogs as some are gathered up into larger blogging networks. On Frozen Blog is a member of the Most Valuable Network of sports blogs. Japers’ Rink is a member of the SB Nation network of blogs. Are we witnessing the birth of the "Alternative Stream Media" that works parallel to the "Mainstream Media?" What this means for the future of blogs – either independent ones or those as members of networks – will be interesting to watch unfold.

But the increasing number of blogs enlarging the footprint of Capitals coverage, coupled with the networking of the heavy players in the Capitals blogging community, anchored by the presence of the biggest player of all in the local community – Ted Leonsis – has made “the art of the blog” one of the big stories in Capitals hockey in 2008.
Posted by The Peerless at 9:25 AM 6 comments:

Those words were uttered by Capitals play-by-play broadcaster Joe Beninati in the midst of a 25-shot first period against the Philadelphia Flyers yesterday. That would be 25 shots… and no goals. He was right, it was just a matter of time…

…when the galactic scales would balance and the Capitals would pay for their inability to grind the Flyers under their skates and into the ice of Wachovia Center. The scales balanced, the Flyers came back, and the Capitals were reduced to a pile of rubble in a 7-1 loss.

Here is the fun fact for this game…the Flyers scored on six of 16 shots to close the second and begin the third period. The best that can be said for that is, if you’re going to suck, get it all out of the way at once.

Here’s another fun fact… the Caps had 14 – fourteen! – power play shots on goal in the first period. They had five for the rest of the game (three of them by Alex Ovechkin).

Alex Ovechkin had what might have been the singularly most frustrating day of his career. He had 12 shots on goal, and none found the back of the net. In no game (in regulation) in his career has he had so many shots on goal and nothing to show for it. Only once (against Carolina in the home opener in 2007) has he had more shots on goal in regulation.
How much was it a shooting gallery out there for the Caps? Eric Fehr had five shots on goal (career high in a regulation game). Michael Nylander had three, the most he’s had in six weeks. For only the third time in 13 games did Karl Alzner have more than one shot (two in this one). Nicklas Backstrom tied a season high with four shots. Only Sean Collins and Donald Brashear failed to register at least one shot, although Brashear got more than enough shots of his own in through other means.

A lot of times when a team loses, folks say, “we ran into a hot goaltender.” Most of the time, that’s crap. Yesterday, it wasn’t. The first period turned in by Antero Niittymaki might be the single best performance by a goaltender on the planet this season. His team stunk on toast in front of him, their heads on a collective swivel watching the Caps dance and shoot at will. If not for Niittymaki’s performance, that final score is probably reversed…and perhaps doubled on the winning side.

Mike Green mentioned that the Flyers stole something in the playoffs from the Caps last year. He was a -4 yesterday, although he was playing injured. Does that add to the tab?

Here is why having the Caps in the Southeast Division sucks… in the last two shifts of the game in the last minute, the Flyers had Scott Hartnell (who already had a hat trick), Jeff Carter (two goals), Joffrey Lupol (four points), and Mike Knuble on the ice. With a 7-1 lead in the bank. One might conclude that the Flyers were looking to find that eighth goal. Bruce Boudreau alluded to it after the game, noting “"What goes around comes around, and it will." Brooks Laich noted the opposition in saying that "We're not happy with it, especially against this hockey team. It wasn't just a 2-1 loss. ... We're looking forward to playing them again." Yes, the Caps get that chance in less than three weeks (January 6th, to be exact), but then get the Flyers only twice more this year…unless they should meet in a playoff series.

It was a thick slice of humble pie for a team that didn’t play especially well in the two games preceding this one. They “played” their best period of hockey of the year in the first period, but getting nothing to show for it more or less sealed their doom. As Boudreau put it, "If you throw everything at them and get 25 shots and you're down at the end of a period, you usually can't maintain that for three periods. Essentially when you're playing a goalie that's in the zone, that's pretty well it. You could see as the third period wore on that we didn't have much left energy and mental wise. We were pretty beat."

They have two days to get un-beat before facing the Rangers in another tough place to play.
Posted by The Peerless at 8:14 AM No comments: