The Peerless Prognosticator is ON THE AIR!!! -- Game 81: Predators at Capitals, April 5th

Well, here we are, the last home stand of the regular season.  Eighty games in, and the Washington Capitals are secure in the knowledge that the will host a first round playoff matchup against the Philadelphia Flyers.  Or the Columbus Blue Jackets.  Or the New Jersey Devils.  Or the California Seals.  Or the Cleveland Barons.

OK, so neither of those last two teams, and before they can entertain any of the others for the first two games of Round 1 of the postseason, there is the matter of this home stand that starts on Thursday night against the Nashville Predators.  The Preds appear to be the hockey intelligentsia’s pick as the most likely team to come out of the Western Conference for their second straight Stanley Cup final, so think of this matchup as a Stanley Cup preview.

And why not think of the Preds as the cream of the crop in the West?  This is the best team, wins and points wise, in franchise history – 51 wins and 113 points going into their last two games of the season.  They have come back to earth a bit over the last couple of weeks, though.  After peeling off a 15-game points streak (14-0-1) over a one-month period from mid-February to mid-March, the Preds are 3-4-1 in their last eight games.  That slump has been characterized by an unusual leakiness on defense and in goal.  They have been out-shot, 269-249 over that span and have allowed 27 goals in those eight games (3.38 per game).  Three times in those eight games Nashville allowed five or more goals.

It has put pressure on the offense to produce, and for Caps fans the player who instantly comes to mind is former Capitals first-round draft pick Filip Forsberg.  Despite missing 12 games this season for a variety of reasons (including a three-game suspension for committing interference on the New York Rangers’ Jimmy Vesey in February), he leads the team in points (61), power play goals (11), and overtime goals (2).  Forsberg is on the cusp of assembling his best year in this, his sixth NHL season.  He already has a career high 38 assists, he is within three points of his career best (64 in 2015-2016), the 11 power play goals are a career high.  And he drives success with his production.  Forsberg has points in 41 of the 65 games he has played this season, and the Preds are 30-7-4 in those games.  And although he is in just his sixth season with Nashville and fourth as a full time player, he is climbing the franchise history rankings.  He enters this contest fifth in team history in goals scored (114), 14th in assists (138), ninth in points (252), 10th in power play goals (29), tied for fourth in game-winning goals (23), second in goals per game (0.35; minimum: 100 games played), 12th in assists per game (0.42), and fourth in points per game (0.77).  He had consecutive three-point games before being blanked in the 2-1 loss to Florida on Tuesday night.  Forsberg is 6-4-10, plus-4, in seven career games against Washington.

What Forsberg is not is the team leader in goals this season.  That lead belongs to Viktor Arvidsson, who has 29 goals so far and appears about to secure his second consecutive 30-goal season (hopefully not in this game; he had 31 last year).  His 29-31-60, plus-19 scoring line in 76 games this season looks a lot like his 31-30-61, plus-16 scoring line from last season.  And if he does get that 30th goal this season, he would join Forsberg as the only players in Nashville history to have two 30-goal seasons (five other players have one, in addition to Arvidsson).  He has not been lighting the lamp with quite as much frequency lately, though.  Since he recorded a two-goal game in a 4-2 win at Edmonton on March 1st, he has five goals in 16 games.  Not a big drop-off (a 26-goal pace over a full season), but some.  Arvidsson is 2-1-3, minus-1, in six career games against the Caps.

If one was thinking about Vezina Trophy finalists in mid-March, chances are that Pekka Rinne would have been among them.  Of 41 goaltenders who logged at least 1,500 minutes through March 19th, Rinne was tied for first among them in wins (40, with Tampa Bay’s Andrei Vasilevskiy), third in goals against average (2.21), second in save percentage (.931), and first in shutouts (8).  He allowed as many as five goals in a game just three times.  However, in five games since then, he is 1-4-0, 3.62, .880, and he has allowed five or more goals twice.  Having it happen against the Toronto Maple Leafs, with their high-powered offense, might be categorized as “one of those things.”  Allowing six on home ice to the Buffalo Sabres in 40 minutes of work is a head scratcher.  It does not seem as if it is a case of too large a minutes burden being the case for his slump of late.  His 3,435 minutes ranks eighth in the league, and it is the sixth-highest total in his 12-year career (he played 4,169 minutes in 2011-2012).  Then again, since the dark 2004-2005 season, only five goalies age 35 or older have recorded 3,500 minute seasons (three did it twice).  Rinne turned 35 last November.  So, does head coach Peter Laviolette rest him for the final two games of the regular season to prepare for the postseason?  Rinne is 4-1-0, 2.40, .915, in five career appearances against Washington. 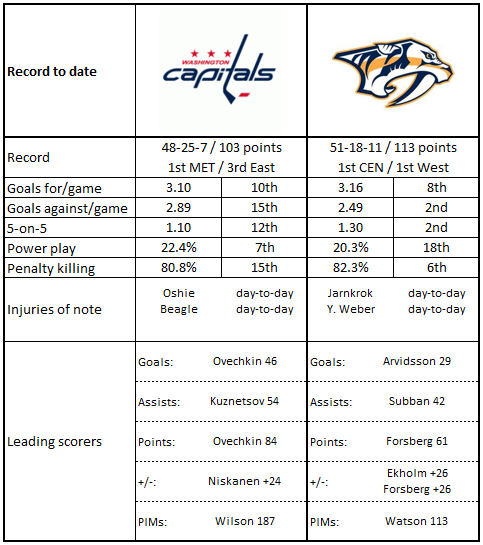 2.  As one might expect with that penalty profile, the Predators have spent the most time in the league this season killing penalties (475:46).  However, they have also spent 428:58 on power plays (sixth in the league).  Still, their special teams time differential (minus-46:48) is sixth-worst in the league.

3.  Only Tampa Bay (6) has had more overtime power plays that the Predators (5).

4.  Nashville cleans up in the middle period.  Only Tampa Bay has more second period goals scored (109) than the Preds (97), and Nashville’s plus-24 goal differential in the second periods of games is topped only by the Lightning (plus-37).

5.  If Nashville scores first, that’s a problem.  The Predators lead the league in wins when scoring first in games (39).

1.  The Caps actually have a worse special teams time differential than Nashville: minus-57:22 (fourth-worst in the league).

2.  If the margin is two, that’ll do… Washington leads the league in wins by a two-goal margin (14).

4.  Games played by the Caps feature the fewest shots per game by both teams in the league this season (61.0), mostly a product of the Caps being last in the league in shots on goal per game (29.0).

If Nicklas Backstrom is Capitals Nation’s pick as most underrated player in the league, the Nashville fans’ entry might be defenseman Roman Josi.  It seems he’s played his entire career in the shadow of one teammate or another.  Whether it was his first five seasons being a teammate of Shea Weber or the last two with P.K. Subban, there has been another Predator defenseman on whom a brighter light shined.  However, since he became a full-time player in the abbreviated 2012-2013 season, Josi ranks highly in his own right among NHL defensemen: games played (427/T-19th), goals (72/7th), assists (202/10th), points (274/7th), power play goals (26/8th), game-winning goals (14/T-6th), total minutes played (10,836/6th), time on ice per game (25:22/7th), and shots on goal (1,130/5th).  But there is a curious thing about his ice time.  More of it is not necessarily a good thing.  In 31 games this season, Josi skated more than 25 minutes, and the Predators have a record in those games of just 14-10-7 (1-4-2 in the last seven instances).  Josi is 4-4-8, even, in ten career games against the Caps.

It has been a strange and, at times, difficult season for Jakub Vrana, especially the 2018 portion of it.  Since January 31st, when he was out of the lineup in a 5-3 win over the Philadelphia Flyers, he has missed seven of the Caps’ 31 games and skated fewer than 12 minutes in 14 of the other 24 contests.  He has top-six skills, which does not necessarily make him a top-six player, and he certainly is not getting top-six minutes.  And it is hard to know what to make of the absences.  The Caps were 3-3-1 in those seven games he missed, but they were 10-3-1 in those 14 games in which he skated less than 12 minutes.  Whatever his ice time, the Caps could use his production in terms of second-level support and engagement on offense.  Washington is 18-5-2 in the 23 games in which Vrana recorded a point so far this season, 14-5-2 in games in which he recorded at least three shots on goal.  He, like a lot of young scorers, can be streaky, evidenced by his following up a five game stretch over which he had points in four and went 1-4-5, plus-4, with a five-game streak without a point and minus-3, a streak he could be looking to break in this contest.  In two career games against Nashville, Vrana has an assist and is even in plus-minus.

This game is a “measuring stick” mostly in the minds of fans.  These are two teams looking to hone things in advance of their respective postseasons.  They are like the veteran pitcher who gets shelled in spring training, causing fans to think “he’s lost it,” when what he has been doing is working on a new pitch or a new wrinkle in his delivery, preparing for when the games matter more.  Both teams will be looking to play the “right way” to establish good habits before the first round of the playoffs start next week.  But what does stick out is a bit of uncertainty in their respective nets.  Is Pekka Rinne overworked for the Predators, and will one Caps goalie grab the job by the throat to get the nod in the first round that starts next week?  Plots and subplots are what crowd our thoughts.