When It Matters Most

We are, hopefully, a long way from it for the Caps, but eventually just about every team faces an elimination game in the Stanley Cup tournament. Even last year, the Boston Bruins faced elimination four times – three times in a Game 7 – before winning the Stanley Cup.

Those are the games that test a team’s mettle. Win or go home. All you have worked for over the six, seven, eight, or even nine months of a hockey season come down to that game – the elimination game – when your back is against the wall.

In those games, you get a glimpse into how competitive individual players are and how they deal with pressure. And for some players – the ones on whom the light shines brightly even in the least meaningful games – the pressure is incomprehensible.

Which brings us to Alex Ovechkin. The disappointments of the Washington Capitals over the last four years of playoffs have been Ovechkin’s disappointments. As the face of the Capitals much of the blame has been laid at his feet. But, as you have probably guessed by now, there is another side to this. Ovechkin, as it turns out, has been at or near his best when things were worst, when the Caps were facing elimination.

In four playoff years, Alex Ovechkin has played in ten elimination games. He and his Caps are 6-4 in those games, and Ovechkin has had his share of production in almost all of them. Here is the history… 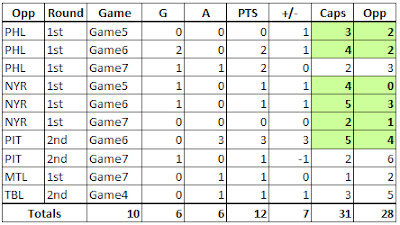 Five times in ten games he had at least one goal. Eight times he had at least one point. He was 4-3-7 in six wins, 2-3-5 in four losses. Only once in ten games was he on the “minus” side of the ledger. He has been a model of production and consistency when his teams face elimination. Again, the drum we have been beating almost since he was drafted has been that the real trick for the Caps would not be in drafting an Alex Ovechkin. That was the easy part. The real chore would be the kind of team that was built around him.

If there is a benchmark against whom Ovechkin might be compared, well, use the usual one – Sidney Crosby. The Penguins’ center has played in seven elimination games of his own in five playoff seasons. And while the Penguins are 4-3 in those games (including one in which they won a Stanley Cup – Game 7 of the 2009 finals), Crosby is 2-4-6 in those games and a collective minus-1. In fact, since his best elimination game – a 2-1-3 performance against Ovechkin’s Capitals in Game 7 of the 2009 Eastern Conference semi-finals – he does not have a point and is minus-3…

The prevailing narrative over the past several years is that Sidney Crosby is a big-game player, and Alex Ovechkin is not. Extending the argument to its absurd limits, Sidney Crosby is “five times better” than Alex Ovechkin. In fact, this is a rather simplistic (or in the case of Chris Russell – simple-minded) argument that serves as a proxy for the fact that the Pittsburgh Penguins “team” has been better than the Washington Capitals “team.” On that score, not even Caps fans can reasonably disagree.

Goals, assists, points – they do not tell the whole story of a player’s performance in any game or any season, but they are the manner in which games are decided. And on those occasions when it came to a “win or go home” scenario, Ovechkin has stepped up and in a more productive manner than one of his chief competitors. Let’s just hope he doesn’t have to do it too often between now and, say, mid-June.
Posted by The Peerless at 6:23 AM No comments: