The Peerless Prognosticator is ON THE AIR!!! -- Game 27: Capitals at Lightning, December 9th

The Washington Capitals wind up their three-game road swing against arguably their stiffest opponent on the trip when they visit the Tampa Bay Lightning at Amalie Arena in Tampa.  The Lightning come into this contest with the best record in the Eastern Conference (through Sunday’s games), 18-7-3, and the second-best record in the league.

Tampa Bay has yet to lose consecutive games in regulation time this season, an important note for this contest since the Lightning lost to the Columbus Blue Jackets, 3-1, in their last outing.  The Lightning have been especially formidable at home, where their 11-3-1 record is, again, best in the East and second-best in the league.  Until they lost to the Blue Jackets last Saturday, Tampa Bay had reeled off five straight wins at home, outscoring opponents by a combined 20-7 margin.

Suspects usual and unusual contributed to that five-game winning streak.  Among the former, Steven Stamkos was 3-6-9.  Tyler Johnson, who is apparently suffering no “sophomore slump” after his Calder Trophy-finalist season last year, was 1-3-4, as was Valtteri Filppula.  Perhaps unexpectedly, Nikita Kucherov had a pair of goals in the five-game home winning streak, allowing him to match in 24 games overall the nine goals he recorded in 52 games last season.  Ryan Callahan, not normally thought of as a big scorer, was 4-5-9.

Backstopping all of this in goal was Ben Bishop, who earned the decision in each of the five straight home wins.  In addition to being 5-0-0, Bishop recorded a goals-against average of 1.40 and a save percentage of .940, along with one shutout.  In five career games against Washington, Bishop is 1-2-1, 4.14, .884.  That lone win came in a 4-3 win on November 1st against the Capitals in which he stopped 28 of 31 shots. 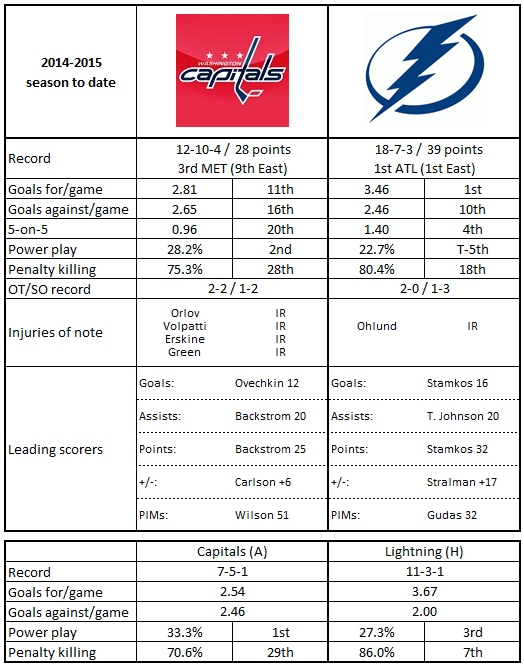 1.  Some teams play suffocating defense like a boa constrictor, squeezing the life out of a team.  Tampa Bay is more like a Gatling gun that doesn’t ever seem to run out of ammunition.  The Lightning lead the league in scoring offense, but they have a certain relentlessness in doing it.  Tampa Bay is the only team in the league having scored 30 or more goals in each of the three periods of games this season.  Their 30 first period goals ranks tied for third in the league, their 31 second period goal ranks tied for fifth, and their 34 third period tallies ranks tied for second.

2.  The Lightning have scored more even strength goals this season than any other team, and it’s not all that close.  Their 69 goals is a healthy margin more than second place Calgary (64).

4.  As prolific a team as Tampa Bay is on offense, you would think them a capable come from behind team.  They are not, at least when it comes to comebacks from deficits at the second intermission.  Tampa Bay (0-7-0) joins Columbus (0-11-0), Buffalo (0-13-0), and Arizona (0-11-0) as the only teams not to have earned a standings point when trailing in games after two periods.

2.  Maybe it’s the travel that brings out the Caps’ ornery side, but only four teams (New York Islanders, Ottawa, Buffalo, and Winnipeg) have been credited with more hits on the road than the Capitals (380).

3.  Washington is one of only six teams with a positive turnover differential on the road this season (takeaways minus giveaways), and their +15 is best in the league.

When the Tampa Bay Lightning traded Martin St. Louis to the New York Rangers for Ryan Callahan, a first round draft pick in 2015, and a second round draft pick in 2014, the Lightning might have thought they were getting a heart-and-soul guy who would leave all of his effort on the ice every night.  What they might not have counted on was goal scoring.  Through 23 games played so far this season, Callahan has 11 goals, a 37-goal pace that would obliterate his career high of 29 goals in the 2011-2012 season.  His 11 goals in 23 games matches the 11 goals he recorded for the Rangers last season in 45 games before he was dealt to the Lightning.  He has hit a bit of a soft spot, though, having gone his last four games without a goal, his longest streak without one this season.  Callahan is 12-7-19, plus-9 in 26 career games against Washington.

With four shots on goal (one goal) against the New Jersey Devils last Saturday, it marked consecutive games with shots on goal for Evgeny Kuznetsov for the first time since November 14-15 against the Devils and St. Louis.  It was the first time he recorded consecutive games with multiple shots on goal (he had two against Vancouver a week ago) for the first time since November 2-4 against Arizona and Calgary.  That is what a promotion to the second line and power play time will do.  He has goals in two of his last four outings after going 11 straight games without a goal.  Kuznetsov has an assist in two career games against Tampa Bay.

The Caps have not played many games against Atlantic Division opponents, but what they have faced has not provided much in the way of happy endings.  The Caps are 2-4-1 against the Atlantic so far, their wins coming against Boston and in a Gimmick against Florida.  They lost to these same Lightning, 4-3, back on November 1st.  Since then the Caps are 8-6-2 overall, two of those losses coming in the only games they played against the Atlantic, to Buffalo and to Toronto.  This will be the first of two meetings against Tampa Bay in a four-day span, the second game to be played on December 13th in Washington.  This game, and the one to follow, provides a good benchmark for evaluating the Caps as they approach the one-third mark of the season.  On paper, Tampa is the stronger team at both ends of the rink.  However, while Tampa Bay stumbled in their last game against a weaker Metropolitan Division opponent, the Caps gave hints in their last two games, both of which they limited their opponent to one goal, that a run could be coming.