Washington Capitals vs. Pittsburgh Penguins: The Cousins Sittin' On The Porch Looking Back at Game 5 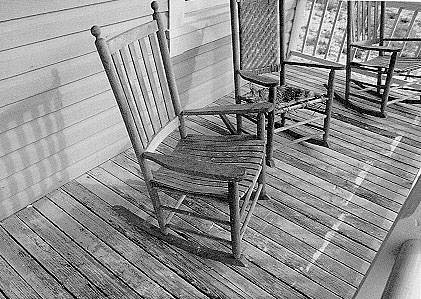 The Washington Capitals skated to skate another day on Saturday night, beating the Pittsburgh Penguins, 4-2, in their Eastern Conference semifinal contest to narrow the series to a 3-2 advantage for the Penguins heading to Pittsburgh for Game 6.  Cheerless spent the evening peeking out from under his “Hee-Haw” themed blanket, while Fearless was reading “Bartlett’s” trying to find the right quote to capture the feelings Capitals Nation had.  And we’re just through Game 5 of the second round.  But what did they think of the contest?

Cheerless… I can’t take this anymore.  First they fall behind giving up the first goal, then they fell behind again.  Even after Nicklas Backstrom scored that goal to tie the game early in the third period, you just knew that Pig Knuckle (that’s Tom Kuhnackl, cousin…) or Soft Pretzel (Jake Guentzel) or Can o’ Schlitz (Justin Schultz) was going to score the next goal.  They had eight shot attempts over the next four minutes, five of them on goal, before Evgeny Kuznetsov finally gave the Caps the lead.  And even then you couldn’t be comfortable.

Fearless… When Kuznetsov scored it was the second time in this series that the Caps had a third period lead.  The other game they won they had a two-goal lead in the third period (2-0 in Game 3) but allowed two late empty-net goals to force overtime.

Fearless… It was the old core and the new core, the “Young Guns (who aren’t so young anymore)” and the “Fun Guns.”  Alex Ovechkin and Nicklas Backstrom scoring goals for the old guard, and Andre Burakovsky and Evgeny Kuznetsov scoring for the new.  This is precisely the formula the Caps have to have on, if not an every night basis (well, perhaps every night for the rest of this series), than a consistent one.  If Alex Ovechkin has a hat trick every game, chances are the Caps are still going to need goals from somewhere else to win series.  Kuznetsov and Burakovsky supplied just what the Caps needed.

Cheerless… What happened to that double-shifting thing for Alex Ovechkin.  He skated just 12:27 in even strength ice time last night and 17:46 overall.  Seven forwards had more even strength ice time.  Funny thing about that.  It was the 17th time in 95 playoff games Ovechkin skated less the 19 minutes overall.  The Caps are 15-2 in those games.  They are 31-47 when he skated more than 19 minutes.

Fearless… The Caps had 20 shots blocked by the Penguins in Game 5.  That appears to be a threshold of sorts.  Washington won both games in which Pittsburgh blocked 20 or fewer shots (they blocked 18 in the Caps’ Game 3 win), lost each of the three games in which the Pens did not top that 20 blocked shot threshold.  The Caps were even able to take advantage of a blocked shot, Alex Ovechkin having his initial offering blocked by Ron Hainsey, but then following up the rebound to collect it and roof it over Marc-Andre Fleury’s glove.  Getting shots through and in deep – on net or even misses – is something to watch for in Game 6.

Fearless… The Caps are 1-1 in such games against Pittsburgh, both games decided in overtime.

Peerless… One elimination game down, one to go.  Oh, you say “two to go?”  No.  The only elimination game the Caps have now is on Monday night.  Thinking past that is a fool’s errand.  What was encouraging about Game 5 were several things.  They did not let the game get away early, when they had a curious lack of energy.  Just as in the first four games, they dominated possession, but didn’t do it by padding the numbers with shots blocked by Penguins that turned into odd-man rushes the other way.  They dug in and dug deep in the third period to find a way to finish, and it was the product of players who have to contribute and who have had less than complimentary things said about them in the postseason – Alex Ovechkin, Nicklas Backstrom, and Evgeny Kuznetsov.  And they had Braden Holtby turn in what would normally be called a “standard issue” Holtby performance, but one that has not been evident in this series until now, when it was needed most.

Well, the Caps need these players to do it again.  And they could still use some contributions from the third line (the “not Ovechkin” part of it) and the defense, although Kevin Shattenkirk is quietly piecing together a decent series at the offensive end with his production in the last three games (points in each contest).  The Caps don’t need a standout as much as they need all 19 guys – 18 skaters and goaltender – rowing hard in the same direction.  Do that on Monday, and they will row right back to Verizon Center for the series-deciding game on home ice on Wednesday.

Posted by The Peerless at 11:39 AM No comments: