The Peerless Prognosticator is ON THE AIR!!! -- Game 72: Capitals at Senators, March 22nd

Having taken a 6-2 pasting at the hands of the Pittsburgh Penguins on Sunday evening, the Washington Capitals have to get back up, shake themselves off, and jump back on the horse on Tuesday night against the Ottawa Senators at Canadian Tire Center.

The Caps come into this game again trying to avoid losing consecutive games in regulation for the first time this season.  That is something we have been saying a lot recently.  That is because the Caps come into this game with a 7-5-1 record over their last 13 games.  It has not been an easy go of it for the Caps, who have been outscored, 35-32, in those 13 contests.

Meanwhile, Ottawa’s slim playoff hopes are almost extinguished.  With nine games to play, the Senators find themselves seven points out of a wild-card berth, and the Detroit Red Wings, who hold that seven-point lead, also hold a game in hand on the Senators.  Ottawa simply has not been able to step up in the 2016 portion of the season, going 16-17-2 in the new year.  They have not won consecutive games in regulation time since they beat Toronto and Tampa Bay in early February (although they will have a chance to do just that against the Caps after beating Montreal, 5-0, last Saturday).

Scoring has not been a problem for the Senators, who are averaging 2.77 goals per game in the 2016 portion of the season.  Scoring defense and special teams are another matter.  Ottawa has allowed an average of 3.03 goals per game over their last 35 games, which goes along with a penalty kill that has been ineffective, to say the least – 74.2 percent over that same span of games.  The power play has not been any better, converting only 13.7 percent of its chances over those same 35 games.

Ottawa’s problem, in part, has been not getting scoring when they need it from players that need to provide it.  Case in point – Mike Hoffman.  After posting 27 goals in 79 games last season, Hoffman was on a pace to improve upon that with 24 goals in his first 52 games.  However, he has just two goals in his last 17 games, one his last 11 contests.  In five career games against the Capitals, Hoffman is 1-1-2, even.

Another example of underperforming is a more persistent one.  Bobby Ryan just has not lived up the promise as a goal scorer that he displayed when he had four consecutive 30-plus goal seasons for the Anaheim Ducks.  In his third year as a Senator, Ryan appears once more as if he could fall short of the 25-goal mark after scoring 23 in 70 games in his first year in Ottawa and 18 goals in 78 games last season.  He is on a pace for 25 goals, but like Hoffman is coming up short as the season winds down.  Ryan has just three goals in his last 20 games.  In 13 career games against Washington, he is 6-4-10, minus-6.

Dion Phaneuf has to wonder into what sort of situation he has been dropped.  Traded to the Senators by the Toronto Maple Leafs as part of a nine-player deal in early February, he arrived in time for the Senators to fall into a swoon that leaves their playoff hopes almost non-existent.  In the 19 games played since he arrived, Ottawa is just 9-8-2, and his contribution has been limited to a goal and seven assists while averaging 23:31 in ice time per game.  He is not nearly the offensive threat he was in his early days with the Calgary Flames when he posted 65 goals and 206 points over his first four seasons.  He has not recorded double-digits in goals since finishing with 12 in 2011-2012 with Toronto, which was also his last 40-point season (44 in 82 games).  In 20 career games against the Capitals, Phaneuf is 1-8-9, minus-8. 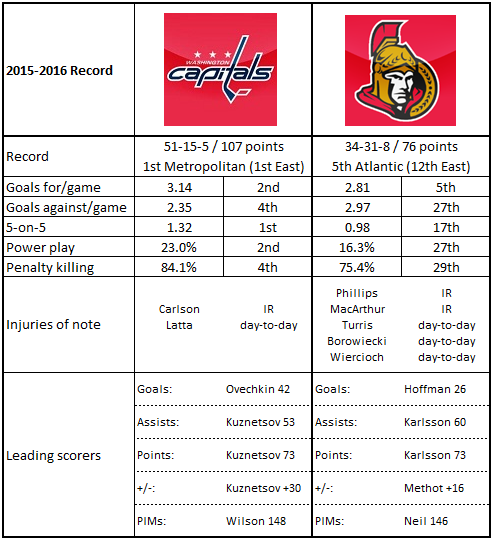 1.  Ottawa comes into this game having failed to record a power play goal in nine straight games (0-for-23).

2.  Erik Karlsson leads all NHL defensemen in multi-point games this season with 20.  Pittsburgh’s Kris Letang is next with 15.

3.  Ottawa is a very good team when they score first; they have the fifth-best winning percentage in the league when doing so (.808).  The trouble is, they don’t score first very much.  Only Toronto has scored the first goal of a game fewer times (23) than the Senators (26).

2.  The Capitals are one of two NHL teams having allowed fewer than 60 goals in each of the three regulation periods this season (56 in the first, 50 in the second, and 57 in the third).  Pittsburgh is the other team.

5.  The Caps are going to want to improve their possession numbers on the road.  In their last nine games they were at or under 50 percent Corsi-for at 5-on-5 overall with a cumulative Corsi-for of 48.3 percent.  These nine road games have been accompanied by a weak PDO, the Caps finishing seven of those games under 100.0, three times under 95.0.  As one might expect, only twice in those nine games did the Caps have a 5-on-5 goal differential in positive territory, both times at plus-1 (numbers from war-on-ice.com).

Over his last 14 games, Andre Burakovsky has points in nine of them (4-5-9), and while the point totals do not seem like a lot, he has done it with ice times under 15 minutes in 12 of those games.  And, until he came up a minus-3 against Pittsburgh on Sunday night, he was a “minus” player in just one of his previous 13 games.  He has been a very efficient shooter this season, converting 15.7 percent of his shots on goal (16 of 102), best on the club among the 20 skaters having appeared in at least 20 games for the Caps.  He is one of just 19 players over the past two seasons to have appeared in at least 100 games and recorded a shooting percentage of 15.0 percent or better.  In three career games against Ottawa, Burakovsky is 0-2-2, plus-2.

When you think the Caps are putting things back together, like they did with consecutive wins over Pittsburgh and Toronto, they lose a game they had a chance to win against the Rangers.  Or when they win consecutive games against Boston and Anaheim in extra time, they drop a pair – one of them in overtime – on their California trip.  Or when they win consecutive games against Carolina and Nashville, then they get blown out by Pittsburgh.  It is not a team that is stringing together a week’s worth of solid performances at a time the way they were earlier in the season.  The Caps have 11 games to get their affairs in order before the games have higher stakes.


(programming note...we will be off for a few days, but there is a lot of information out there from a lot of great Caps' sites.  See you on the weekend).
Posted by The Peerless at 7:00 PM 1 comment: