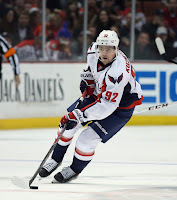 “In rivers, the water that you touch is the last of what has passed and the first of that which comes; so with present time.”
-- Leonardo da Vinci

When the 2014-2015 season dawned, Washington Capitals forward Evgeny Kuznetsov was in the conversation of who might be among the Calder Trophy finalists as NHL rookie of the year come the spring.

Oddly enough, the focus of this attention was having little of it, deflecting the very notion of it…

“Of course only once in your career do you have a chance to win it.  But you have to realize that the Calder Trophy should be given to someone who is 18 years old, someone who is playing professionally for the first time. This is not my first year playing professionally. Again, if I am given the chance… As long as we keep winning as a team, it won’t be just me, but Andre Burakovsky will also have a chance to win it. As long as the team is winning, all individual trophies will come naturally.”

And frankly, he did not exactly give supporters a lot of ammunition to support his candidacy early in the season.  He recorded three assists in his first four games of the season, but he scored just one goal of his own in his first 20 contests, after which he was 1-5-6, plus-2, and was riding a nine-game streak without a point.  He had as many penalty minutes as points, and not particularly many of either.

His pace picked up over his next 13 games, but a 3-5-8, plus-3, scoring line was not going to make anyone forget Nashville’s Filip Forsberg or Calgary’s Johnny Gaudreau, who at the time seemed to be measuring one another for a dash to the Calder at year’s end.  Then he fell into another dry spell, going 11 games with just one assist to his credit.

It was part of a season marked by streaks for Kuznetsov, but he ended it with a flourish, going 5-8-13, plus-5, in his last 17 games.  Despite averaging a little over 13 minutes of ice time per game, 26th overall among rookies appearing in at least half of their teams’ respective games, Kuznetsov finished: 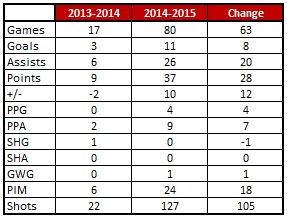 Fearless’ Take:  Kuznetsov and Trotz had something of a feeling-out period.  The player was spoon-fed ice time, logging fewer than ten minutes in seven of his first 20 games of the season.  Ice time turned out to matter for Kuznetsov, who did not record a point in any game in which he skated less than ten minutes.  However, in 21 games in which he skated more than 15 minutes he was 5-12-17, plus-9.  That would appear to be a reflection of deployment – skating fourth line minutes versus second line minutes (and second power play unit minutes).

Cheerless’ Take: Four (twice), seven, nine (twice).  Those were the game-streaks Kuznetsov had this season of four games or longer.  In all, he didn’t record a point in 48 of his 80 games (Compare that to 34 games in 80 for Johnny Gaudreau and 37 in 82 for Filip Forsberg, to cite two other rookies of note).

Odd Kuznetsov Fact:  The team was streaky with respect to Kuznetsov, too, especially late in the campaign.  Over the last 17 games in which Kuznetsov scored a point, from January 28th through the end of the season, the Caps won four in a row, lost five in a row, then won seven of their last eight contests.

Game to Remember: November 28th versus New York Islanders.  Over his first 20 games, Evgeny Kuznetsov averaged a shade over 11 minutes a game, only three times getting the call for more than 15 minutes in a contest.  And, he was without a point in nine straight games going into the Caps’ November 28th matchup against the Islanders at Verizon Center with just two modest three-game point streaks on his resume to date.

His season might have turned around mid-way through the first period.  Manning the Nicklas Backstrom position along the right wing wall with the second power play unit, Kuznetsov kept the puck on a string, just out of reach of Islander defenders, first up, then down the wall.  As he was inching his way back down the wall, he backhanded a pass under the stick of the Isles’ Frans Nielsen and into the wheelhouse of Matt Niskanen, who one-timed a shot that was redirected by Andre Burakovsky past goalie Chad Johnson to give the Caps a 1-0 lead.  Then, with the Caps holding a one-goal lead in the third period, it was Kuznetsov’s turn to finish a play.  It was only fair, since he started it by intercepting an attempt to clear the zone by the Islanders. Kuznetsov fed Troy Brouwer, whose shot was blocked Travis Hamonic.  Kuznetsov ran the puck down in the corner to Johnson’s right, circled out, then faked a shot that Hamomic went down to block.  Kuznetsov curled the puck around him to give him a better shooting angle and wristed the puck over Johnson’s right shoulder inside the near post to give the Caps some breathing room in what would be a 5-2 win.

Game to Forget: October 9th versus Montreal. It was Opening Night on F Street, and after the previous spring in which Kuznetsov had three goals and nine points in 17 games to wrap up the season, folks might have been looking for him to get off to a good start in his first full season with the Capitals.  It would have been nice, but then again, he would have had to have been on the ice for that to happen.  Kuznetsov skated five first period shifts for 3:59 in ice time, and that would end up being the bulk of his ice time for the evening.  He skated a total of five shifts over the last two periods of regulation and one shift in overtime totaling 11 shifts in all and just 6:36 in ice time.  Then, in the second round of the trick shot phase, he shot wide on goalie Dustin Tokarski as the Habs went on to win the shootout in five rounds and the game, 2-1.  It would be Kuznetsov’s lowest ice time total for a game this season.

If there was one Capital who outperformed his regular season in the postseason, it was Kuznetsov.  He tied Alex Ovechkin for the team lead in goals (5), was tied for fourth in points (7), was tied for second in plus-minus (plus-4), and tied for the team lead in multi-point games (2).  It was his goal that propelled the Caps past the New York Islanders and into the second round:

As it is, here we are in the Stanley Cup finals, and Kuznetsov still leads all rookie skaters in the playoffs in shots on goal (42), goals (5), and plus-minus (plus-4).

Kuznetsov will get his wish.  Someone else will win the Calder Trophy this season as the league’s top rookie.  That does not do much to diminish Kuznetsov’s performance, of which it might be said that he was better late than he was early in the season, and he might have been the Caps’ best player in the postseason (or at least on a very short list).  He is a much better player now than he was in October, and there is every reason to expect that the player he is now will pale in comparison to the one he will become next season and beyond.