It was bound to happen sooner or later.  The Washington Capitals began Week 8 with a big win against a powerful opponent, a 4-1 win over the St. Louis Blues.  However, by week’s end, the Caps lost ground in the standings and no small measure of the good will that came with a 10-4-1 record over the previous five weeks. 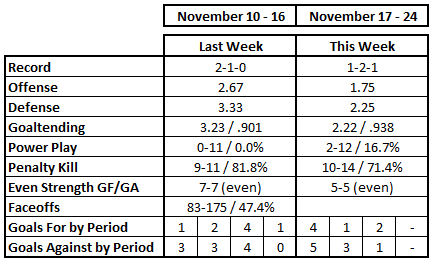 After five weeks of winning records, the Capitals finished with a losing week in Week 8.  It was a week that started with promise, a 4-1 win over the St. Louis Blues being among their most impressive of the season both in performance and in the quality of the competition.  That set up a contest for the Metropolitan Division lead against the Pittsburgh Penguins that carried the usual baggage of “Crosby vs. Ovechkin” discussion.  That contest was not much of one, the Penguins controlling matters over most of the game and leaving Verizon Center with a 4-0 win.  The Caps let about five minutes of their next game against the Montreal Canadiens get away from them, and it was enough for the Canadiens to run out to a 3-0 lead, after which they held on for a 3-2 win.  The Caps ended their week with a game they “played” well but for which they were unrewarded, pummeling the Toronto Maple Leafs’ net for 50 shots on goal and 101 shot attempts, but being defeated in the trick shot competition, 2-1.

Not only would it be the high point of the week for the offense, it would be the last game of the week in which someone other than Alex Ovechkin would score a goal.  The Caps were shut out against Pittsburgh on Wednesday, and it was Ovechkin who scored the three goals the Caps recorded in a 3-2 loss to Montreal and a 2-1 trick shot loss to Toronto.  Ovechkin finished the week with five of the Capitals’ seven goals, the five goals also being the high in points.  Nicklas Backstrom finished the week with three assists.

The Capitals have had their issues with shots allowed and possession statistics in general this season.  The best that can be said of the shots on goal matter is that the week was one of steady improvement, at least as far as volume was concerned.  After allowing a week-high 47 shots to St. Louis on Sunday, the Caps allowed progressively fewer shots, ending the week with allowing Toronto 28 shots on Saturday. It was only the fourth time this season Washington allowed an opponent fewer than 30 shots on goal.

The possession statistics were a bit more of a mixed result, especially if one decomposes them.  The Caps started the week, if not on the good side of the possession numbers, at least within shouting distance of them.  They Corsi-for percentage in 5-on-5 close situations was 47.6 percent against St. Louis.  By week’s end the Caps improved to 48.4 percent against Montreal, then finished with their second best result of the season, a 60.4 percent effort against Toronto (source: extraskater.com).

Then there was that game against Pittsburgh.  Back on October 28th, the Caps finished their game against Vancouver with their worst Corsi-for percentage in 5-on-5 close situations for the season – 35.6 percent.  That was bad.  What happened against the Penguins was a result in search of an adjective.  The Caps finished with a Corsi-for in those 5-on-5 close situations of only 14.3 percent (3 events for, 18 against).  Their Fenwick-for percentage was even worse.  The Caps had no Fenwick events (shots on goal, shots missed) in 5-on-5 close situations and allowed 11.  It was actually decent defense (the 11 Fenwick events being among the top-five efforts of the year for the Caps), but it hardly mattered.

The goaltending was generally solid.  Saving almost 94 percent of 146 shots (36.5 per game) is about as much as a club can ask their goaltenders to do.  Braden Holtby was 1-1-1 for the week with a .948 save percentage for the week.  He continues to build a solid season after a slow start.  In his last 15 appearances he has a save percentage of .936.

Michal Neuvirth did not play badly as much as he had a couple of unfortunate moments.  In a space of 4:47 against Montreal in the first period he allowed three goals on seven shots.  One shot – a deflection out of the air by David Desharnais – was something he could not control.  Another, a slam dunk by Daniel Briere on a power play after a loose puck squirted from a clot of bodies in front, was one of those random sequences that occurs from time to time.  It was the first goal, on a rush by Travis Moen, that Neuvirth played off the bottom of his catching glove, a misplay that slipped past him and into the net, that started the Montreal flurry.  It was a brief, but decisive slip in play that put the Caps in a hole out of which they could not climb.

For a while the Caps sat in second place in both power play and penalty killing.  At the end of this past week, the power play slipped for the second straight week.  Over these last two weeks the Caps are 2-for-23 with the man advantage (8.7 percent).  The Caps had a respectable efficiency record over the first three games of the week, recording two power play goals on 11 shots in 13:42 of power play time.  Against Toronto the Caps had a shooting gallery – ten shots on goal in six minutes on three power plays.  But they could not dent goalie James Reimer, and it was decisive in the 2-1 shootout loss.

What might be most noteworthy here is that in the two games Mike Green played this week he had only 1:32 in total power play ice time and did not record a shot on goal.  On the other hand, John Carlson finished with 16:23 in power play ice time over four games and recorded a team-high eight shots on goal of the 21 total.
e

It was not a good week for the Caps on the other side of special teams.  Washington allowed power play goals in the first three games of the week, making it four straight and seven of their last 11 games after going eight games in a row without allowing one.  Braden Holtby and Michal Neuvirth were a combined 22-for-26 in tending goal against the power play (.846 save percentage) – not especially good, but not awful, either.  The 26 shots in 22:16 of power play time was something that might have been controlled more and was just one more element in a disappointing week for the penalty kill.

The goals scored for were misleading.  Four goals in the first period in four games is not a bad outcome.  However, when three of them come in the first game of the week, another in the dying seconds of the first period against Montreal, it did not make for a consistently dominant first period, a problem the Caps have had for most of the season. 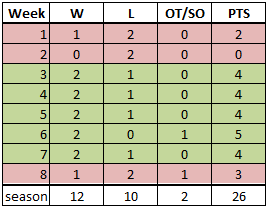 The takeaway from this week is this number: 215:33.  That is the ice time that has elapsed since any Capital other than Alex Ovechkin scored a goal.  Needless to say, while it is nice that Ovechkin is racking up goals, the Caps are going nowhere if he is the only reliable offensive threat.  That the Caps would have a losing week despite some overall fine play by their goaltenders – the .938 save percentage for the week – speaks to that idea.  Had the Caps managed goals by anyone else, they might have ended the week 2-1-1 or perhaps even 3-1-0.

That the Caps squandered good weeks by Ovechkin and the goaltenders makes this an especially disappointing week in a way that goes beyond the mere loss to the arch-rival Penguins.  The coming week will provide an opportunity to turn that around – a game against struggling Ottawa, a rematch against Montreal at Verizon Center, and a visit to Long Island to play the New York Islanders, a team that will start this week having lost three in a row and eight of its last ten contests.  Ending the month on the good note on which they started it would make for a happy Thanksgiving.

Posted by The Peerless at 4:54 PM No comments: