I'd love to see these uniforms in the "Eye Test Classic:" 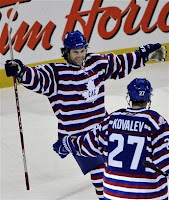 Posted by The Peerless at 12:39 PM No comments:

According to Capital Insider, Chris Clark could be done for the year...

We've suspected there had to be something wrong with Clark. A player that scored 50 goals in two seasons, even if it was as the opposite winger from a guy scoring almost 100 of his own, doesn't just forget how to play hockey, even if he spent most of last year on the shelf with an injury.

But the timing of this has a fortuitous aspect to it as well (not for Clark, but for the roster). Clark hasn't been playing, and now we have the reason why and why his production has been down as much as it has been. Meanwhile, the Caps have the kinds of roster needs a contender has -- not major reworkings of the roster, but the kinds of tweaking a team might need to prepare for what amounts to a whole different season that starts in April. We are now 30 days from the trading deadline (March 4th, 3:00 EST).

The Caps have a wish list that might include a stay-at-home defenseman or some more grit among the forwards. The timing of Clark's surgery might give the Capitals the cap wherewithal to pursue such a move. Until now, it seemed unlikely the Caps would do much at the deadline other than see what return a Michael Nylander might fetch. This changes the game.
Posted by The Peerless at 12:07 PM 3 comments:

Every team, whether good or bad, in Canada or in the States, east coast or west coast, needs a whipping boy.

Jeff Schultz, such is your lot in life as a Washington Capital.

And it isn’t fair, not by a long shot. Young Mr. Schultz (and he is young – 22) gets more than a fair amount of grief from Caps fans – on message boards, blogs, or in the stands (we heard a lot of commentary from the stands on his play in the weekend games). Why he is the target of such invective, we’re not entirely sure. Perhaps it is this… 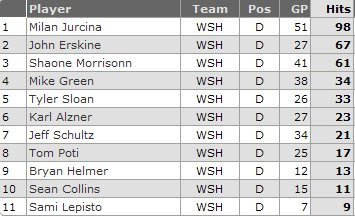 Schultz is seventh on the team in hits, last in hits-per-game. For a guy who is of a size roughly equivalent to Chris Pronger, that is apparently the kiss of death.

Well, gee, it’s not like Schultz doesn’t bring other things to the party. Part of defending is to try to keep shots from getting to the goaltender. That might take the form of tying up a defender in front, and it might take the form of blocking shots. With respect to the latter, Schultz has a respectable 50 blocked shots in 34 games. The number is good for fourth on the team, and on a blocked shots per game basis is ahead of Shaone Morrison, John Erskine, and Tom Poti.

Schultz doesn’t shoot a lot (with only 22 shots on goal, he probably should shoot more) from his position, but he has the best ratio of shots on goal to blocked shots – he’s getting shots through so that a play can be made.

OK, all other things equal, one would like a player of Schultz’ size to clear-cut the terrain in front of a goaltender and punish players along the boards. And, given that he’s second in shorthanded ice time for a team that struggles on the power play, you’d like to see him improve in that regard. But he plays his position well, especially given his age and experience level – certainly more good things happen when he’s on the ice than bad things at even strength.

Schultz is going to be a good defenseman in this league. Perhaps – probably, in fact – not an all star (he’ll never score enough for that), but one who will be effective in his anonymity. He’ll be out there for a lot of time where nothing happens for the other guys, and you probably won’t even notice that it was Schultz on the ice for a lot of that.
Hits make an impression on fans. So do fights. Neither is Schultz' game. You have to watch him -- really watch him over time to see the sort of ways he can be effective. It isn't that he hasn't made and won't make mistakes. That's a rite of passage for a 22-year old defenseman in this league.

But for the time being, we think he’s coming along just fine.
Posted by The Peerless at 6:57 AM 6 comments: