“I'd like nothing better than to achieve some bold adventure, worthy of our trip.”
-- Aristophanes

When the Washington Capitals defeated the Minnesota Wild in late March last season at Xcel Energy Center, it was not the best of games for goaltender Braden Holtby.  He and the Caps just could not put the Wild away.  They took a 1-0 lead, then gave it back.  They took a 4-2 lead into the last five minutes of regulation, then they gave it back, giving up the game-tying goal with less than 30 seconds left. T.J. Oshie saved the day with a game-winning overtime goal less than two minutes into the extra session, and the Caps had a fifth straight win.

Although Holtby allowed four goals on 26 shots, he got the win – a milestone win.  It was his 40th win of the 2016-2017 season, making him just the third goaltender in NHL history to win 40 or more games in three consecutive seasons, joining Martin Brodeur (2005-2006 through 2007-2008) and Evgeni Nabokov (2007-2008 through 2009-2010) as the only netminders to do it.  Brodeur, who won 40 or more games eight times in his storied career, is the only goaltender with more career 40-win seasons than Holtby (three, tied with Nabokov, Miikka Kiprusoff, Jacques Plante, and Terry Sawchuk).

You might think “wins” is a team statistic, and you would have a point, but Holtby is also the only goaltender in the NHL who, in each of the past three seasons, appeared in at least 20 games, posted a goals-against average of less than 2.25, and recorded a save percentage of .920 or better.  He has more shutouts (21) than any other goaltender in that time span (Devan Dubnyk and Marc-Andre Fleury have 16).  He has played more minutes than any other goaltender (11,768 to Tuukka Rask’s 11,421).  If Braden Holtby is not at the top of his profession, he can see the summit from where he stands.

On his current arc of performance, it is almost a lead-pipe cinch that Braden Holtby will be the greatest goaltender in the history of this franchise.  Consider this quirk of team history.  Last season Holtby was 27 years old and at its end stood in second place in the all-time franchise rankings in games played (307), wins (191), minutes played (17,610) and shutouts (32).  He is second in each of those categories to Olaf Kolzig.  But here is the thing.  Holtby has accomplished this by the age of 27.  Kolzig was not the Capitals’ full time number one goaltender until he was 27, in the 1997-1998 season (when he appeared in 64 games, almost as many as the total of his first six seasons combined (71)).  Here is how the two compare to the age of 27 in their respective careers (regular season): 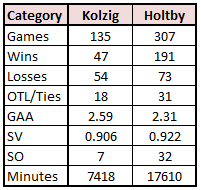 Holtby had three different seasons in 2016-2017…great, good, and gack!  The great part was the first half of the season.  In his first four ten-game segments, he was 19-8-4, 1.90, .931, with five shutouts.  In the second half of the regular season his win-loss record looked better, but his performance numbers dropped off, going 23-5-2, 2.25, .918, with four shutouts.  Then there was the postseason.  Until last spring, Holtby assembled one of the most impressive postseason set of numbers in NHL history.  Despite a 22-24 win-loss record, his goals against average (1.87) and save percentage (.937) compared favorably to any goaltender in NHL playoff history.  But in the 2017 postseason he started well, if inconsistent in the first round (4-2, 2.36, .925, three times allowing four goals), and then he withered in the second round series against the Pittsburgh Penguins (3-4, 2.57, .887).  That last image of Holtby in the second round is one that Caps fans hopes does not carry over into the new season.

The Big Question…  Do three years of Vezina-worthy consideration accompanied by three seasons of postseason disappointment have a consequence?

There is also another “only” that is of no small concern.  Over the past three seasons, only Nashville’s Pekka Rinne has appeared in more postseason games (42) than Holtby (38).  Holtby is the only one of 13 goalies appearing in at least 20 postseason games over that span with a goals-against average of less than 2.00 (1.97) and a save percentage over .930 (.932).  However, since the Caps were eliminated in the second round in each of those three seasons (twice in overtime of the clinching game, twice in Games 7), one could also argue that no goaltender appearing in at least 20 games over those three years has less to show for it, relative to expectations, than Holtby (not unlike the rest of the team, to be fair).

Over at Japers' Rink, we raised the matter of “disappointment fatigue” and wondered if the Caps have enough resolve to grind through an 82-game season after three years of postseason disappointment.  At no position and with no player might this be a more valid question than at goaltender and with Braden Holtby.

The one thing that Olaf Kolzig did by age 27 that Braden Holtby did not do was put his team on his back and drag them to a Stanley Cup final, which Kolzig did in his 27th year.  Not that the Caps’ failures to go deep in the playoffs in recent years can be laid at the feet of Holtby alone, given his sterling performance numbers overall (last spring notwithstanding).  Doing as Kolzig did might be the thing that cements Holtby as the greatest goaltender in team history.

But before that can happen, things are already a bit different in the goaltending ranks this season.  Mitch Korn has been elevated from goaltending coach to Director of Goaltending, thus elevating associate goaltender coach Scott Murray into Korn’s old position.  If you are of a mind that Korn and Holtby were a match blessed by the gods of hockey, it is then a matter of wondering what effect, if any, Murray will have on Holtby.

It is an uncertain road ahead for Braden Holtby and the Caps, one that might be a bit bumpier than it has been in the past few seasons as he contends with recovering from a disappointing finish last season, changes in training camp, and a thinner roster of skaters in front of him.  Consider it a bold adventure worthy of what fans hope is a deeper postseason run for Holtby and the Caps.