The Peerless Prognosticator is ON THE AIR!!! -- Game 46: Jets at Capitals, April 23rd

This is it, the most important “most important” game of the season, the game that will in all likelihood decide who wins the Southeast Division for the last time, who goes to the playoffs and…

Cheerless, what are you doing?

“I wuz just doin’ that thing that that guy does at those fights.”

Yes, Cheerless, it is.  And what are you trying to do, get a gig as an announcer for hockey games?

It doesn’t seem to have quite the same feel.

I don’t think that’s going to work, either.

“There’s gotta be a good one in there somewhere.”

You keep working on it, cousin.  Meanwhile, there is something of a rumble on F Street on Tuesday night, the Winnipeg Jets coming to town in desperation mode to face the team they are chasing, the Washington Capitals, for a spot in the post-season.

This will be the first time that the Jets visited Washington since Game 2 of the season, back on January 22nd.  You might remember, dear reader (then again, you might not wish to), that on that night the Jets spotted the Caps a first period goal to open the game, then scored a pair of their own late in the first period and another pair in the second period to take a 4-1 lead.  Some window dressing by Troy Brouwer on a power play with less than two minutes left made things a bit more respectable, but it was still a disappointing 4-2 loss to Winnipeg in what would be what is now the famous “2-8-1 start” for the Capitals’ 2013 season.  It happened to be the first time the Caps lost a home opener in 13 years, a game played so long ago that head coach Adam Oates actually played in it and recorded an assist.

Well, guess the shoe is on the other foot, now.  On March 16th the Jets hit their high-water mark for the first time, four games over .500 and sitting on top of the Southeast Division.  But good fortune did not seem to agree with Winnipeg, which promptly went into a spin.  Over their next 11 games they went 3-8-0 and not only fell out of the Southeast Division lead, but tumbled all the way to tenth place in the Eastern Conference.

The Jets have righted themselves since their misfortune, but it might be too little, too late.  Even having gone 5-0-1 over their last six games going into their Monday night game against Buffalo, the Jets found themselves three points behind the Caps in the Southeast and three points behind the New York Rangers and Ottawa Senators, each of whom is tied for seventh place in the Eastern Conference with just two games to play after that Monday night game in Buffalo.

Guess you could say this game is big for the Jets.  But they do come into in on a roll.  The Jets have outscored their opponents by a 26-14  margin over the six games leading up to Monday night.  Special teams have been a bit mixed over this stretch.  The power play is 4-for-21 (19.0 percent), but has power play goals in four straight games.  Meanwhile, the penalty killers have been superb, going 15-for-15 (100.0 percent).

The Jets’ recent success is largely a product of their line of Bryan Little, Andrew Ladd, and Blake Wheeler.  The three have combined for nine of the 26 goals scored over this period.  Individually, their scoring lines are impressive.  Ladd leads in scoring over the last seven games (4-9-13), while Wheeler (3-8-11) and Little (2-8-10) are not far behind.

Here is how the teams compare overall (through games of Sunday): 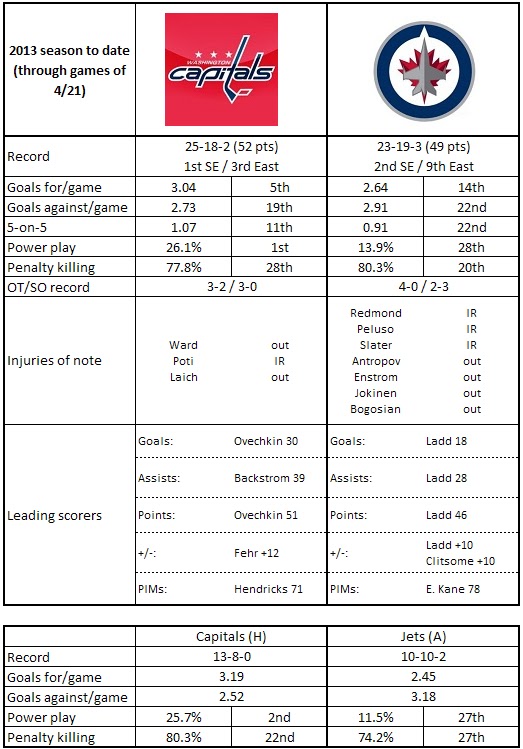 2.  Winnipeg once had one of the best road records in the league.  On March 26th they were 10-6-2 away from MTS Centre.  However, going into their game in Buffalo on Monday they have lost their last four road games by a combined score of 17-5.

3.  Winnipeg is nicked up.  Based on the injury report available at TSN.ca, as of Monday (before the Jets’ game against Buffalo), 19 of the Jets’ 119 goals this season would be on the bench, including two of their best defensemen in Tobias Enstrom and Zach Bogosian.

4.  Winnipeg suffers from being weak late in games.  Only Carolina has allowed more third period goals this season than the Jets’ 53 goals allowed, and Winnipeg’s goal differential in the third period (minus-20) is worst in the league.  Only Philadelphia is close at minus-18.  Carolina is third-worst at minus-12.

5.  Given that last point, it seems odd that the Jets have the third highest win total when leading after two periods (18, tied with Washington).  They are 18-1-0.  Ah, but if they trail at the second intermission?  They are 1-13-0, the .071 winning percentage being third-worst in the league.

3.  Alex Ovechkin is back in his accustomed place in shots on goal – first in the league (208) – but he has sustained a healthy shooting percentage in doing so.  His 14.4 percent shooting percentage is very near his career best – 14.6 percent – set in his record-setting 65-goal season in 2007-2008.

This is an “all hands on deck” game for the Jets, and that means that Ondrej Pavelec would appear a near lock to get the back-to-back assignment in goal for Winnipeg.  He was superb last night in the Jets’ 2-1 win in Buffalo, reversing a recent trend of more and more goals allowed in games.  It is not as if it would be new to him, though.  Part of being second in the league in minutes played among goaltenders is playing back-to-back games.  The trouble for the Jets, though, is that he has not done well in the second half of those back-to-back games.  In six games that were the back-half of back-to-back games, Pavelec is 2-4-0, 4.15, .877, and he was pulled from games twice – once on February 1st in an 8-3 loss to Tampa Bay (five goals on 14 shots in 24 minutes) and again on March 22nd  in a 6-1 loss to the Caps (three goals on nine shots in 25 minutes).  Whether the Caps clinch or Winnipeg takes over the Southeast Division lead is going to depend largely on whether Pavelec can muster up one more superior effort in a situation in which he has struggled.

The pressure is on Alex Ovechkin, too.  There is the cosmetic factor of this game being a “statement” game for his Hart Trophy candidacy as the league’s most valuable player.  But as a practical matter, he is the captain.  He is the finisher, the player expected to rise to the occasion in a game that could settle the matter of making the playoffs.  If Ovechkin has a big night, you can bet that the Caps will be celebrating by about 10:00 this evening.  If he doesn’t…

1.  Floor it!  One gets the feeling that Winnipeg left a lot on the ice in Buffalo last night.  They pounded goalie Jhonas Enroth with 39 shots (and still managed to get only two by him).  They held Buffalo to 47 shot attempts.  There was a lot of effort expended last night, and the Jets’ legs might not be there.  Push them early.

2.  Big time players in big time games.  The Caps have been carried during their resurgence, in large part, by the big guns – Ovechkin, Green, Nicklas Backstrom.  They need to step up as if this is a playoff game, because frankly, it is.

3.  Save the Mister Softee for the ice cream.  Braden Holtby does not need to be spectacular.  He needs not to suffer the lapses he did against Ottawa – a soft goal and a giveaway.  Maybe imagine that the Jets are the Canadiens…