The Nats are Who? 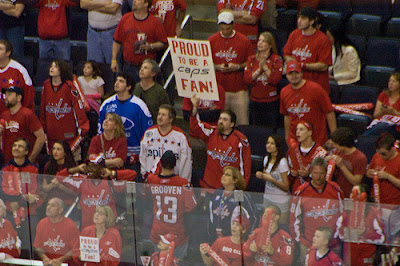 So, Kornheiser says the Nats are the Caps. The Washington Nationals baseball team is the collection of “choking dogs (his term)” that are the Washington Capitals Really?  Washington is a low bar for the postseason, to be sure, but in that pond, the hockey team is the big fish…by miles (with apologies to the fans of the local soccer team).  Imagine if the Caps had reached the postseason five times in their last 23 seasons.  Oh, that’s the Redskins.  The Burgundy and Gold have one playoff win in their last 16 seasons (and really, how many Redskin fans are bragging about that win over the Tampa Bay Buccaneers being a classic?).

Or how about a team that has reached the postseason seven times in the last 28 seasons, a team that cleared .500 only seven times in that span?  There are your Washington Bullets/Wizards.  And not once in those 28 seasons does that franchise have so much as a division championship.  The last one of those the franchise had was when the Bullets won the Atlantic Division crown in 1978-1979 on their way to their only NBA championship (kudos to them…at least they have one; the Caps are waiting on their first one).

Then there are the Nats.  There are those three trips to the postseason of which Kornheiser speaks.  The franchise has reached the playoffs only four times in 48 seasons (it would have been five, but the 1994 season was cut short due to a labor-management dispute with the Montreal Expos having the best record in the National League).  The franchise went 30 straight years without reaching the postseason until the Nats did it in 2012.

Meanwhile, the Capitals have reached the postseason 26 times in the last 33 seasons, including eight of the last nine.  The other three teams – Redskins, Wizards, and Nats have reached the playoffs a combined nine times over the last nine seasons (three apiece).  The Caps’ playoff troubles have been discussed far and wide, but they have won five playoff rounds over the last nine seasons.  The other three teams have won a combined two series (both by the Wizards; the Redskins have not won a postseason game).  And, the Caps are the only team in Washington among the four major pro sports to have played for a championship in the last 24 years.

Kornheiser remarked about the Nationals, “Look, they’re the Caps now.  Okay, the Washington Nationals are the Washington Capitals. They choke. They just cannot win any of these series.”  Let’s leave aside the fact that against a very good Los Angeles Dodger team, the Nats were missing arguably their second best starting pitcher and starting catcher, both of them all-stars.  Repeat the old clichés about guys stepping up, or that there are no excuses in the playoffs, but lose two players in the two most important positions on the field, and your chances of a deep playoff run start to approach zero.

But the larger point has to do with this claim that “the Nats are the Caps.”  Hardly.  In a championship-starved community, success has been hard to come by for its pro-sports teams (again, apologies to the fans of the United soccer team…theirs is a history to take some pride in).  But the Nats are not the Caps.  The Nats – not to mention the Redskins and the Wizards – aspire to be the Caps in these parts.  We think we speak for most Caps fans when we tell Kornheiser in a manner a New Yorker would appreciate…. #@$% you, pal.

Photo: clydeorama
Posted by The Peerless at 8:06 AM No comments:

The Washington Capitals recorded standings points in each of their first two games of the season, but it hardly looked as if it was a team with all of its cylinders firing.  In their third game of the young season, the Caps looked more like the team that won the NHL’s Presidents Trophy last season as they defeated the Colorado Avalanche at Verizon Center, 3-0, on Tuesday night.

The first order of business was to try to get the power play back on track after going 0-for-8 in the first two games.  They did just that late in the first period.  After going without a goal on their first power play of the evening, the Caps scored in familiar fashion.  T.J. Oshie lost control of the puck in the high slot, but it skid to Marcus Johansson at the edge of the right wing faceoff circle.  Johansson sent the puck out to Dmitry Orlov at the top of the offensive zone, and Orlov fed Alex Ovechkin for a one-timer from the left wing circle.  Ovechkin’s drive eluded goalie Semyon Varlamov low on the short side, and the Caps had a 1-0 lead 15:44 into the game.

Mid-way through the second period, Oshie doubled the lead on another power play.  Nicklas Backstrom controlled the puck behind the Colorado net.  He worked it around the wall to Johansson at the right wing boards, and Johansson threaded a pass to Oshie between the hash marks.  Oshie sent the puck back down to Backstom, who immediately returned it to Oshie for a one-timer that beat Varlamov on the stick side at the 11:32 mark.

Oshie closed the scoring at even strength in the third period.  The Capitals attacked with speed and numbers, Ovechkin carrying the puck into the offensive zone on the left side with Oshie and John Carlson joining him.  Ovechkin cut to the middle with Oshie driving to the net.  Ovechkin wristed a shot at the Avalanche net that Varlamov knocked down, but Oshie was quick on the rebound and stuffed it past Varlamov to make it 3-0 with 6:25 left in the contest.

All that remained was to preserve the shutout for Philipp Grubauer, starting in goal in relief of Braden Holtby.  Grubauer was tested infrequently in the contest, but he stopped all 18 shots he saw to earn his first career NHL shutout as the Caps skated off with their 3-0 win.

-- Braden Holtby was honored before the game with a ceremony marking his winning the Vezina Trophy as the league’s top goaltender last season.  He was the third Capital to win the award, joining Jim Carey (1996) and Olaf Kolzig (2000).

-- The Caps’ second power play goal was the product of a skirmish between Jarome Iginla for the Avalanche and Tom Wilson for the Caps.  After a shot went off the rink to stop play, Iginla skated around the Caps’ net and found Wilson on the other side.  The players got up in one another’s faces, and the gloves came off.  There was some close-quarter punching, but it did not last long.  Iginla received and instigator and a ten-minute misconduct in addition to a fighting major for his trouble, while Wilson received just the fighting major.

-- The Caps had balanced shooting.  Seven of the 18 skaters had at least three shots on goal, led by T.J. Oshie (6).  Daniel Winnik and Justin Williams were the only skaters not to record a shot on goal.


-- Tom Wilson has fights in two of his three games to date.  But neither of them, not his bout with Pittsburgh’s Tom Sestito nor his fight last night with Jarome Iginla, could be said to be started on Wilson’s initiative.  Both came with the Caps holding 1-0 leads and looked like players on the team behind trying to light a fire.  Can’t say it worked for either team.  The Penguins did get the tying goal, but not until the second period (Wilson and Sestito fought mid-way through the first period).  Last night, Iginla was given an additional two minutes for instigating, and the Caps scored 12 seconds into the ensuing power play.

-- Nicklas Backstrom was 13-for-17 in the faceoff circle (76.5 percent).  He schooled Nathan MacKinnon in the finer arts of taking draws, winning eight of 10.

-- The last time the Caps allowed fewer than 18 shots in a shutout was November 26, 2010 in a 6-0 win over the Tampa Bay Lightning.  Semyon Varlamov, who was the victim of the shutout last night, pitched the shutout for the Caps that evening on 17 shots faced.

Solid.  Just a solid effort.  In a way it looked like a weeknight game, but one that might have been played in January, when the team would have its game legs solidly under them and would be in sync in most respects.  It was not flashy, but it was in its own way dominating.  True, the Avs were coming off a game the previous evening in Pittsburgh, but part of being a successful team is taking advantage of an opponent in that situation, and the Caps did precisely that.  Not much to find wanting in that sort of effort.