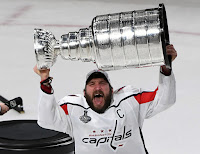 “There are some days when I think I'm going to die from an overdose of satisfaction.”
-- Salvador Dali

In our prognosto for Alex Ovechkin last September we wrote…

“…time plays no favorites, and Alex Ovechkin is no exception.  His constitution might push off that reckoning (he appears to be coming to training camp significantly leaner than last season), but it will come, and his production will diminish, if it has not started to already.  It makes George Bernard Shaw’s comment about time especially noteworthy.  Is there enough time for Ovechkin to realize the last of the great achievements available to an NHL player?”

The short answer to that last question is, obviously, “yes.”  After ten trips to the postseason and 120 games, Ovechkin finally got to accept the Stanley Cup from Commissioner Gary Bettman after his 121st postseason game and skate it around the rink as a champion.

It was the exclamation point on quite a season for Ovechkin.  In his 13th NHL season he won the Maurice “Rocket” Richard trophy for the seventh time, falling just one goal short of what would have been his eighth season of 50 or more goals.  As it was, Ovechkin became just the fifth player in NHL history to record at least 49 goals having reached the age of 32 and only the second since 1975.

It was a season that was part “hot start” and part “Mr. Consistency.”  The hot start was scoring seven goals in his first two games and recording three hat tricks 25 games into the season, a total that only two other players would match over the entire season (Connor McDavid and Alex DeBrincat).  The consistency part came mostly in the second half of the season.  In his last four ten-game segments, Ovechkin scored six goals three times and seven once (that coming in the last, 12-game segment).  As it was, he scored 26 goals in the first 41 games of the season, 23 in the last 41 games.

Another number that stands out is his assist total.  He had 38 helpers in 2017, his highest assist total since he had 53 in 2010-2011.  He had four three-assist games, a total exceeded by only five other players in the league. And being a helper mattered.  The Caps were 20-5-2 in the 27 games in which Ovechkin recorded an assist.  They were 9-3-1 when Ovechkin recorded at least one assist without scoring a goal himself. 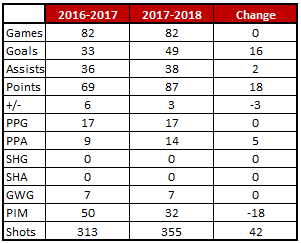 Fearless’ Take… For being one of the most physical players in the NHL, Alex Ovechkin has demonstrated remarkable durability.  The 2017-2018 season was his fifth NHL season in which he dressed for every game (including the abbreviated 48-game season of 2012-2013), and the first time he dressed for every game in consecutive seasons since the 2007-2008 and 2008-2009 seasons.  Since he came into the league in 2005-2006, only five players have appeared in more regular season games than the 1,003 in which Ovechkin appeared.  That Ovechkin has missed a total of 29 games over his 13-year career is among the most remarkable numbers in his career (14 to injury, eight to suspensions, three to personal reasons, four other).

Then there is the matter of his being “selfish” as a product of taking all those shots.  He did lead the league with 355 shots on goal, but that was the third-lowest total for a full 82-game season in his career.  And, it isn’t as if his not shooting helped the club.  In the 22 games in which he recorded more than five shots on goal, the Caps were 22-6-0; they were 11-6-2 in the 19 games in which he recorded two or fewer shots.

Odd Ovechkin Fact… Ovechkin had 21 blocked shots in 16 games this season (the third-lowest blocked shots total of his career for a full 82-game season).  The Caps were 14-1-1 in those games.

Coming into this season, no player in the NHL had more four-goal games since 2005-2006 than Alex Ovechkin.  Two of them came on home ice, one of those against the Montreal Canadiens in January 2008.  That was until the home opener of the 2017-2018 season.  Having recorded a hat trick in the season opener in Ottawa in a 5-4 Gimmick win against the Senators, Ovechkin already started the season as hot as a firecracker.

Just 20 seconds into this game, he was a blowtorch.   With the puck squirting loose from a clot of players out of the high slot, it slid to Ovechkin at the top of the left wing circle.  He spun and fired a shot that goalie Carey Price looked as if he was not expecting, and his glove was late in stopping the shot, and the Caps were off and running.  He scored again just over two minutes later on a power play to give the Caps a 3-0 lead, and then he completed the hat trick in his second straight game with 1:50 left in the first period.  After the Habs got on the scoreboard in the fifth minute of the second period, Ovechkin restored the four-goal lead later in the period, finishing his scoring for the night with four goals in a span of 36:26 in what would be a 6-1 Capitals win.

Alex Ovechkin has had generally good luck against the Philadelphia Flyers.  Coming into this season he was 31-21-52 in 45 career games against the Flyers.  The game on October 14th in Philadelphia did not add to the luster of his body of work against the Flyers.  He was on ice for the first Flyers’ goal that opened the scoring.  Then, after the Caps tied the game, he was on ice for the tie-breaking goal, a shorthanded strike with the Caps on a power play.  And it just didn’t stop.  The Flyers scored eight times on that night, and Ovechkin was on the ice for five of them in an 8-2 loss.  What made it more frustrating was his team-leading six shots on goal and ten shot attempts in less than 15 minutes of work.  He finished with no goals and no points to go along with his minus-4, a season-worst.

Shorter version – his numbers out-performed his games played in terms of ranking.  And yet, he was viewed widely, if not universally, as a postseason failure for not having advanced past the second round of the playoffs.  It was an exceptionally stark contrast to that of his nemesis, Sidney Crosby, who advanced out of the second round four times in the same span of years, reaching the Stanley Cup final in each of those instances and winning three times.

That was then, and 2018 was an entirely different story with an entirely different ending.  Ovechkin was a model of consistency in the postseason.  He had goals in 13 of the 24 games (only two players – Ovechkin and Mark Scheifele – had 13 or more goals in total), points in 19 of them.  He did not have consecutive games without a point, and only twice did he go more than one game without a goal (the last three games against Pittsburgh and Games 3 and 4 against Tampa).

What is more remarkable is Ovechkin’s consistency across series.  Here is how his scoring line breaks down across the four series:

Seven of his 15 goals gave the Caps a lead in games, and three of those were the game’s first goal.  And there was an efficiency to the goal scoring.  Ovechkin scored a goal in each of the games in which he skated less than 18:30 in ice time, and the Caps won all eight games.  That ice time was something managed effectively for Ovechkin, whose 20:09 in average ice time for game was lower than all but two postseasons (19:48 in 2012 and 18:22 in 2017).

It was a winning formula.  Ovechkin led the league in goals scored in the postseason 15, the most in a single postseason since Crosby had 15 in 2009.  You would have to go back to 1996 to find a player who had more goals in a postseason (Joe Sakic had 18 goals in 26 games).  His six power play goals tied for the league lead and was the highest total since Evgeni Malkin had seven in 2009.

The numbers that mattered though were four, 16, and one.  Ovechkin and the Caps navigated through four rounds and 16 wins so he could carry what only one captain gets to accept from the Commissioner… 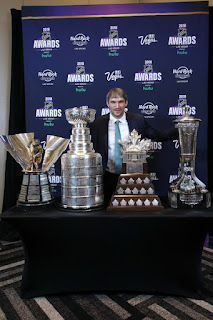 …but it is the Stanley Cup that one imagines it will never cease to be a source of satisfaction for Alex Ovechkin.

Posted by The Peerless at 3:15 PM No comments: