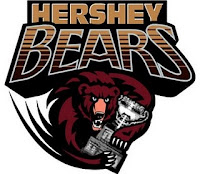 Well, the Hershey Bears stepped away from the precipice last night, coming back from a 3-1 first intermission deficit to defeat the Texas Stars, 6-3, to get the series to 2-1, Stars. The cousins joined us last night to watch the game on ABC-27, by way of Comcast Sports Net. Of course, those two had very different takes on the action. I tried to keep some notes…

Peerless: Well, guys, it’s a series again. Win Wednesday, and the Bears have home ice again and ensure the series goes back to Hershey.

Cheerless: I read where no team lost the first two games of the Calder Cup final on home ice and came back to win the series.

Fearless: Well, that was then, and last night was now. OK, you get what I mean. Five unanswered goals, and the Bears seemed to spend the last 40 minutes in the Texas end of the ice.

Peerless: The game might not have been as close as the score indicated, either. The Stars got one goal off a Bears skate, another when Michal Neuvirth decided Christmas should come early and played the puck from in front of his own net right onto the stick of Francis Wathier, and Wathier didn’t miss.

Fearless: After that, it was just a matter of getting their heads back in the game.

Cheerless: Uh, no team has come back from losing the first two games of the finals at home…

Fearless: Yeah, yeah, we heard. That first period was brutal… those two fluky goals wrapped around a nice Kyle Wilson goal off a pretty feed from Francois Bouchard. But even as the period was coming to a close, you had a feeling it wasn’t over. The Stars weren’t spending a lot of time in the Hershey end, and when they did, they did little with the opportunity.

Peerless: It looked a little as if Texas was content with a 3-1 lead to just go into a shell, clog the middle of the ice like they had done so far, and try to frustrate the Bears into turnovers.

Fearless: It might have worked, too. Especially as bad as the Bears’ power play had been – 0-for-16 going back to the Manchester series. But then Ethan Graham took a pretty bad elbowing penalty mid way through the second – didn’t have to take that kind of penalty there. And the Bears finally made them pay on Wilson’s second goal of the game.

Peerless: Nice goal, but Keith Aucoin did a whale of a job fending off a Stars defender, pushing the puck deep into the zone and finding Wilson for the goal.

Fearless: That was nice, but the series might have turned less than 90 seconds later when Mathieu Perreault found himself planted at the post to goalie Matt Climie’s left. All he had to do when Karl Alzner threw the puck at the net was tap in the deflection.

Cheerless: Uh, guys? No team has ever come back in a Calder Cup final from losing the first two games on their own ice.

Peerless: Uh-huh… So, it’s tied after two, but it’s a good tie, if there is such a thing. The Bears outshot the Stars 12-9 in the period. It never felt as if the Stars had nine shots, and Neuvirth sure shook off the effects of that turnover. Fortunately, he kept his handling of the puck to behind the net, not in front of it.

Fearless: Yeah, but admit it… even when he handled it behind the net, you were thinking… “gulp!”

Peerless: Well, there was some of that, but he was very strong in front of his own net. No rebounds on those few chances that got through.

Fearless: They sure had the Stars back on their heels…

Peerless: Yup. You had a sense it was a matter of time. Then Andrew Gordon got the big one – maybe the biggest goal of the season for the Bears – off another feed from Aucoin.

Fearless: Nice of Aucoin to show up. He had a whale of a game.

Peerless: Sure did, now if they could only get Giroux going. Although, he did have the primary assist on the insurance goal, Perreault’s second of the game.

Fearless: Texas was hanging their heads after that one.

Cheerless: You know… no team has ever come back in the Calder Cup finals from losing the first two games on home ice.

Peerless: -sigh- We’ve heard… often, in fact. But when Gordon got the last one to make it 6-3, you had the feeling that the Bears finally found their legs.

Feerless: And what about the play of Alzner on that one… gets the puck in deep, circles all the way back to the top of the zone, keeps the puck in, fires, and there is Gordon in front to get the deflection.

Peerless: Sweet play. Alzner had a very good last 40 minutes. Now, if his partner can just find his game.

Fearless: Yeah, Carlson has been struggling. Looks like he’s having trouble in transition. A sign he’s played a lot of hockey this season?

Peerless: Could be, but the prospect of tying the series on Wednesday might be enough to shake the cobwebs loose.

Fearless: Let’s hope so. Let’s hope they remember what Coach Mark French reminded them of before the game… “We talked before the game and there's only one team in this league that's won 72 hockey games this year.''

Cheerless: Hey, did you know that...

Peerless/Fearless: SHUT UP!!!
Posted by The Peerless at 6:32 AM No comments: