The Peerless Prognosticator is ON THE AIR!!! -- Game 20: Capitals at Avalanche, November 16th

Hoping the stink of their 6-3 loss to the Nashville Predators on Tuesday night does not follow them to Denver, the Washington Capitals visit the Colorado Avalanche on Thursday night, trying to get back on a winning path after having their modest two-game winning streak snapped.

The Avs will be trying to end a three-game losing streak of their own, dropping a 6-4 decision to the New York Islanders in Brooklyn before losing a home-and-home set to the Ottawa Senators (the first loss coming in overtime).

What Colorado has been is aces on home ice. They have a 5-1-1 record at Pepsi Center, outscoring opponents by a 31-21 margin, all of their wins by multi-goal margins, and both losses by one goal.

Mikko Rantanen leads the Avalanche in home scoring this season (3-6-9) and is coming off a solid year last season, his first full season in the league, in which he was 20-18-38 overall in 75 games. Rantanen also leads the team overall in power play points this season (eight) and is third among forwards in average ice time (8:07). He has been a consistent performer this season, going without a point in consecutive games just once and without a point on home ice in just one of seven games so far (in a 5-3 win over Dallas on October 24th). Rantanen has one goal in his only career appearance against the Caps, that in a 5-3 loss to Washington last March 29th.

Alexander Kerfoot leads Colorado in goals scored (seven), and it can be considered a surprise on several levels. First, Kerfoot was a fifth-round draft pick of the New Jersey Devils (2012) out of the Coquitlam Express, a junior “A” team out of British Columbia. He chose to join the hockey program at Harvard University, where he spent four years and went 36-87-123 in 121 games, serving as team captain and appearing in the Frozen Four in his senior season. At that point, he declined to sign an offer from the Devils and became a free agent, signing a two-year deal with Colorado last August.   He is one of seven rookie skaters to dress for the Avalanche this season, the only one to do so for all 16 games. But he has those seven goals while averaging only 13:11 in ice time per game. Compare that to the more celebrated Clayton Keller, who leads all NHL rookies in goals, but has averaged almost 20 minutes of ice time per night and has appeared in four more games. The key is his shooting percentage that, at 35.0 percent, leads the league among rookies with more than ten shots recorded. This will be his first appearance against the Caps.

Semyon Varlamov has been “the little girl with the curl” in goal this season. When he has been good, he has been very good (five appearances with a save percentage of .919 or better, going 5-1-0, 2.01, .950, with one shutout in those five games. But when he was bad…woof. Five other games with a save percentage under .900, going 2-2-1, 4.31, .850. That feast or famine pattern extends to his home performance where he has a pair of games with a save percentage of .919 or higher and a pair of .875 or lower. He has been more fortunate on home ice, though, where he has not yet lost in regulation time this season (3-0-1). If Varlamov gets the call against the Caps, it will be his 300th career appearance with the Avalanche, second in franchise history behind Patrick Roy (478). In five career appearances against the team that originally drafted him, Varlamov is 2-3-0, 2.03, .950. 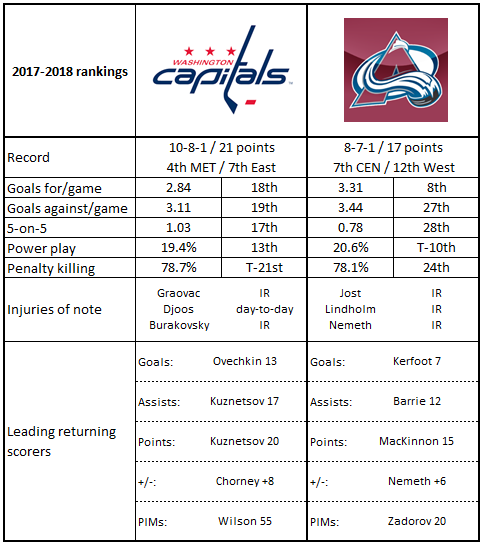 1.  Colorado has a fine record at home (5-1-1), but they are tied for the fewest wins on the road in the Central Division (three, with Dallas).

2.  The Avalanche have dressed 25 skaters this season, and 23 of them have recorded points. Only Anton Lindholm (in nine games) and Gabriel Bourque (in six games) have yet to put a crooked number in the points column.

3.  Outshooting opponents is rare for the Avalanche (six times in 16 games), rarer still when the win such games. With two wins when outshooting opponents, only three teams have fewer wins – Arizona (1), New York Islanders (1), and Minnesota Wild (0).

4.  No team has fewer one-goal decisions than the Avalanche (four), games in which they have a 1-2-1 record.

5.  If you are going to get the Avalanche, maybe it will be in the period with the long change. Colorado has allowed 26 goals in the second periods of games this season, second-most in the league (Florida: 29). They have allowed a total of 28 in the first and third periods of games.

4.  It says a lot about Alex Ovechkin’s start to the season that he is still second in goals scored (13, behind only Nikita Kucherov with 16), but after scoring seven goals in his first two games and nine in his first five contests, he has only four in his last 14 games. He is without one in his last three games.

5.  Tom Wilson has 55 penalty minutes. The next three Capitals in that category (Brooks Orpik, Lars Eller, and Andre Burakovsky) have a combined total of 53 minutes.

It just seems that Nathan MacKinnon has been with the Colorado Avalanche forever. He is second on the active Avalanche roster among forwards in games played for the franchise (316, trailing only Gabriel Landeskog with 444). The first overall pick in what was a decent 2013 draft class (Jonathan Drouin, Seth Jones, Darnell Nurse, and Rasmus Ristolainen, among others, in the top ten picks), MacKinnon has never quite seemed to break through to the “elite” category expected of number one overall picks. He is second in that draft class in career goals scored (80, behind Sean Monahan’s 115) and second in points (221, behind Monahan’s 233). On his own team he is third in goals scored over the five years of his career (Matt Duchene had 96; Gabriel Landeskog has 92), and he is tied with Landeskog in points (221, both trailing Duchene with 235). This season might be one for him to break through, averaging almost a point a game (0.94) after never averaging more than 0.77 points per game in any of his previous four seasons (that high was in his rookie season in 2013-2014). MacKinnon has been putting up points on home ice of late, going 3-3-6 in his last three contests on Pepsi Center ice. He is 3-4-7, plus-2, in seven career games against Washington.

Who leads the Capitals forwards in points per 60 minutes?  Who leads them in plus-minus?  In on-ice PDO?   In primary assists per 60 minutes?  If you said Chandler Stephenson, give yourself a pat on the back (numbers from Corsica.hockey).  Stephenson might be the early season’s most pleasant surprise.  His ascent to this level has been slow and sure.   Drafted in the third round in 2012, he spent the next two seasons with the Regina Pats of the WHL (four years with the Pats overall),  parts of four seasons with the Hershey Bears, and now in his third season with the Caps, some of those stops overlapping along the way.  He has been a bit of a good luck charm, the Caps going 6-4-0 in his ten appearances to date.  And, his home-road scoring has been balanced: 1-2-3, plus-3 in six road games; 1-2-3, plus-3, in four home games.  In all, he is second in total points among the six rookies to have dressed for the Caps, one point behind Jakub Vrana despite having played nine fewer games.  This will be his first career appearance against Colorado.

Strange as it is to say, from a big picture standpoint these might be two teams headed in different directions. Washington, after winning consecutive Presidents Trophies, has taken a step back so far this season and might have a struggle to make the postseason. On the other hand, Colorado has delt with a lot of misfortune in recent years, making the playoff once in the last seven seasons and not winning a playoff series since 2009-2010. But they have improved, and while few outside Colorado (and perhaps few inside Colorado) would think of them as a contender, the progress is a good sign.

The differences between these teams extends to style as well. The Avalanche are one of that next generation of NHL teams that got younger, faster, quicker. The Caps are, if one wants to be charitable about it, in transition from a more veteran, positional team without a lot of foot speed to one that is trying to catch up – literally and figuratively – with this next generation. It will make for an interesting contrast as the Caps wrap up their two-game road trip, one that might hinge on whether the Caps can impose their will, to bend the pace of the game to their liking.

Capitals 4 – Avalanche 3
Posted by The Peerless at 5:30 PM No comments: