So...where are those goals coming from?

Last season, the term that could describe the Washington Capitals’ offense was “middle of the road.” The Caps finished 14th among the 30 teams in the NHL in total goals scored (218 – 2.66/game). They had one player who ranked in the top-80 among goal-scorers (Alex Ovechkin). The second-ranked goals scorer for the Caps (Alexander Semin, who was tied for 85th with 21 goals) is unlikely to return. And that begs the question of where the Caps’ offense is: a) going to be made up compared to their 2011-2012 performance, and b) where it will improve from the disappointing level of performance last season.

One way to look at this is comparing performance to capacity. Among the 21 current roster players likely to be on the roster on opening night (humor us; we are assuming Mike Green is re-signed and that season starts on time), they combined for a total of 204 goals last season.* That number is likely to leave Caps fans more than a bit concerned over the prospects for the 2012-2013 season; it would have tied for 22nd in goals scored last season (with Dallas). 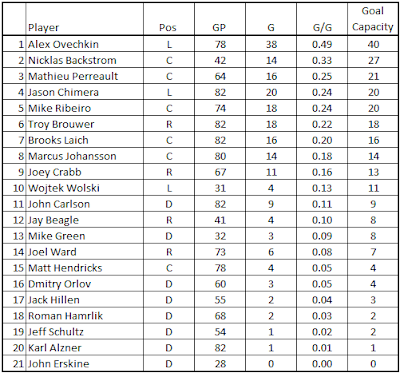 However, looking at goals scored-per-game among these 21 players there was the capacity to score 44 more goals. That assumes that each of the 82 players plays an 82-game season (not possible, of course, since you can dress only 18 skaters in a game). And this is where injury plays a role. Mike Green, Nicklas Backstrom, and Wojtek Wolski missed a total of 141 games last season (31 of the 51 games missed by Wolski was the result of two separate bouts with groin injuries). Based on their goals scored-per game last season, their absences represented 24 goals lost. Having them healthy and producing at that level could go a long way toward replacing the goals lost through the departure of Alexander Semin (21 goals) and Mike Knuble (six goals).

But even if that happens, it gets the Caps back to last year’s level of performance, itself a disappointment. This also assumes that Jason Chimera and Mathieu Perreault perform at last year’s per-game goal scoring levels. We are left with trying to divine a way to see where the Caps can improve on last year’s goal scoring total. Except for marginal improvements over some individual players who might have underperformed relative to expectations (Joel Ward and Roman Hamrlik come to mind), it is hard to see where those improvements are going to come from on this roster.

Let us try and build a goal-scoring scenario that represents a “best case.” Here is a set of working assumptions:

1. Every player having played in at least 75 games last year scores at their goals-per-game rate of last season and plays an equivalent number of games. Eight players; total goals realized: 120.

2. Green, Backstrom and Wolski each play in at least 75 games and produce at their goals-per-game level of last year. Total goals realized: 42.

With these five assumptions, the Caps have 214 goals. To that you can add whatever contributions come from the remaining roster players not accounted for: Dmitry Orlov, Jeff Schultz, Jay Beagle, Joey Crabb, Jack Hillen, and John Erskine. Combined, the Caps might get 25 goals from this group (they scored a total of 21 last season).

That gets the Caps to 239 goals using some rather rosy scenarios. This total would have ranked the Caps seventh in the league last season, tied with Detroit. One could imagine that the Caps could add to this total merely by improving their power play. They had 41 man-advantage goals last season, a total that was better than only three teams last season (Minnesota, Phoenix, and Dallas).

Is it reasonable to assume that the Caps can scare up 12-15 additional power play goals from this roster? If they were to get those 15 goals (adding to player totals already provided in the assumptions above), the Caps would be up to 254, which would have been good for fourth in the league last season. But who is going to get them?

Using all these assumptions, one can cobble together a scenario in which the Caps are in the upper echelon of offensive performance. But this is the “best case” scenario. Injuries occur. Power plays can be inconsistent, especially when installing a new system. New players might not mesh right away. In other words, “things happen.”

All of this might just be another way of saying that those missing goals might not be on this roster, that there is still a piece missing.

* This number includes the 18 goals scored by Mike Ribeiro and the four by Wojtek Wolski.
Posted by The Peerless at 11:15 PM 3 comments: