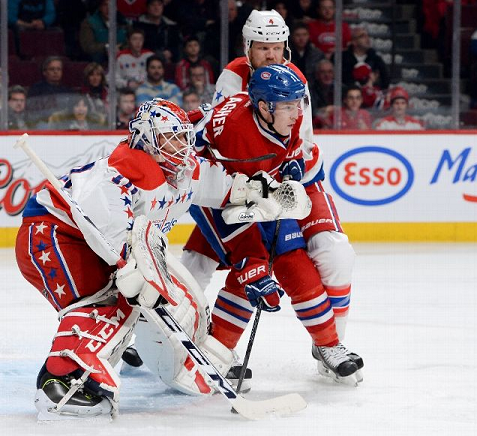 The sixth game that mattered in the Washington Capitals’ 2013-2014 season pitted two slumping teams against one another.  So who would be the game’s pivotal player?  One in a slump, of course.

The Background:  When the Capitals visited Montreal on January 25th, they were taking on a team spinning its wheels in the mud.  Montreal was 4-6-2 in their previous dozen games and in the midst of a three-game losing streak.  That looked like a hot streak compared to the Caps, though.  Washington went into their contest with the Canadiens on a seven-game losing streak (0-5-2), their longest of the season to date and the longest since losing eight in a row in December 2010.  The resistible force was meeting the moveable force.  The question was, which team was which?

Why It Mattered:  As befits two slumping teams, the first period passed without a red light having been lit.  Not that it passed without excitement.  Montreal outshot the Caps by a 12-3 margin and out-Fenwicked the Caps by a 17-4 margin.  That’s called weathering the storm if you look at it from the Capitals’ perspective.

From the Canadiens’ perspective it was an opportunity squandered, and they paid a price for that in the second period.  The Canadiens put a down payment on that price late in the first period when Lars Eller was docked four minutes for a high-sticking double minor.  The Caps’ Nicklas Backstrom has a coincidental single minor for high sticking that knocked two minutes off the power play, but the Caps still had those two minutes to work with.

As that man advantage was expiring early in the second period, the Caps worked the puck around the perimeter from Martin Erat on the right wing wall (in Backstrom’s place) to John Carlson at the top of the offensive zone.  Carlson snapped a long shot toward the Montreal net that was deadened by Jason Chimera at the top of the crease.  Chimera got two whacks at the puck, but goalie Carey Price turned both away.  On the second save the puck popped out to Price’s right where Alex Ovechkin was camped.  Ovechkin juggled the puck on his stick at the goal line then swatted it out of mid-air, off Price, and in to give the Caps a 1-0 lead just as the power play expired.

That goal unleashed the deluge and from the least likely of sources.  Just 79 seconds after the Ovechkin goal Washington would score again.  It started when Carlson wired a pass from the defensive zone in the direction of Troy Brouwer on the far side of the red line.  Brouwer was backing up and almost had the puck slide by, but he managed to get his stick on it where Erat picked it up with speed heading into the Montreal end.  Erat stopped at the right wing boards and let the noise clear out, then found John Erskine coming late.  Erskine shoveled an innocent looking attempt at the net that slid slowly along the ice.  Price was apparently anticipating a redirect attempt from Brooks Laich in the low slot, but Laich did not get his stick on the puck.  It slid though Price’s pads for what was a spectacularly ugly goal and a 2-0 lead for the Caps.

Barely three minutes later it was time for the fourth line to shine.  It started with Montreal’s P.K. Subban moving the puck up the wall to Brendan Gallagher, who lost the puck to Tom Wilson at the blue line.  Wilson threw the puck deep where Brooks Laich collected it.  Laich circled out and fanned on a shot attempt but regained control of the puck.  He left it for Mike Green, who sent a pass to Wilson in the left wing circle.  By this time the Canadiens were hopelessly running around in their own end and managed to lose Jay Beagle on the right side.  Wilson found him.  Beagle took the pass, stepped out, and backhanded the puck into an open net to put the Caps up 3-0.

If that wasn’t weird enough, things took a turn for the bizarre mid-way through the period.  At the Capitals’ end of the ice John Carlson circled out from behind the net with the puck.  Montreal’s Brandon Prust tried to cut Carlson off, but he was upended, it appeared, by a hook from Joel Ward.  The referee did not see it that way.  His arm went up, but to signal a delayed penalty coming to Prust for embellishment.  Play continued.  The Caps hustled the puck up ice into the zone where it ended up on Carlson’s stick.  As on the Caps’ first goal, Carlson threw the puck at the net from the top of the Montreal zone.  This time, though, it made it all the way through, sailing over Price’s glove to give the Caps a 4-0 lead and end Price’s night.  Oh, Prust’s night was over, too.  He received unsportsmanlike conduct, misconduct, and game misconduct penalties for his effort at performance art.  Add that to his five-minute major for dropping the gloves with Tom Wilson not two minutes into the game, and it was a full night for Mr. Prust.

Casey Wellman put the cherry on top of the sundae when he converted a pass from Ovechkin on a 2-on-1 break mid-way through the third period for his first goal as a Capital.  At the other end, Braden Holtby was putting the finishing touches on a 21-save shutout, his first shutout since blanking the Flyers in Philadelphia, 7-0, back on November 1st.

The Takeaway:  What the Caps got in this game was something missing too often – a 20-man effort.  The five goals were scored by five different players.  Thirteen different Caps registered points.  Fifteen Caps finished on the plus side of the plus/minus ledger (parenthetically, Alex Ovechkin had his best plus/minus of the year, plus-3).  It was the first time the Caps recorded five even strength goals in a game since the 7-0 win over Philadelphia in November (they would do it three times in 2013-2014, the last time at Carolina on April 10th, all three times on the road).

Most important from a larger perspective might have been the performance of Braden Holtby.  It was his first win in goal in seven weeks.  In seven appearances since beating Nashville on December 7th, Holtby was 0-3-1, 4.20, .854.  Starting with this win Holtby would finish the season 10-3-2, 2.70, .920, with three shutouts in 17 appearances.

The Caps stopped the bleeding of their seven-game losing streak and including this win would finish the season with a 16-9-6 record over the remaining schedule (a 101-point pace).  The damage to the season had been done, though.  The Caps would need a sustained winning streak over their last 30 games but would not get it.  Four straight would be the best that they could manage, twice.  What they provided, however, was a glimpse at what was possible with this group of players against a very good team, if struggling at the time.  And, they might have rediscovered the goaltender they thought they had when the season started, even if – given the trade for Jaroslav Halak six weeks later – they did not know it at the time.  That is why this game mattered.

Posted by The Peerless at 4:43 PM No comments: