We’re heading into the home stretch of the off-season, and NHL clubs are ramping up their themes for the upcoming 2009-2010 season. And that brings us to slogans. Some clubs choose not to attach a catchy (kitschy?) slogan to this year’s version of their team. Others make reference to their history. And there are those that make it sound like we’re being called to join the Tenth Crusade. Let’s take a tour of the league, shall we?

The Colorado Avalanche have chosen to lure fans with the theme of the “Avalanche Experience.” Wow… now that’s a stone groove right out of the 1970’s. We’re guessing the Avs will take the ice to the strains of “Love’s Theme” from the Love Unlimited Orchestra.

Then there are the Columbus Blue Jackets. For those who don’t know, the team name was selected, according to the club’s web site, to “celebrate patriotism, pride and the rich Civil War history in the state of Ohio and, city of Columbus.” So what is their tag line? “Carry the Flag.” C’mon boys, we’re invadin’ Nashville! Then it’s on to Atlanta!!

Speaking of Nashville, we’re not sure what to make of “It stays with you.” We read that and think that last night’s kielbasa and kraut is staying with us, but it’s not the thing of which warm memories are made.

In Los Angeles, they go all mathematical on their fans. Their slogan is “Pride=Passion=Power.” Not quite up there with E=MC2, but it is an adequate representation of the transitive property of mathematics. But this year, while “pride” might equal “passion,” and that might equal “power,” it also might equal “putrid,” “pathetic,” and “pitiable”… “pfft.”

Then there are the history-oriented teams. Detroit’s web site proclaims the club as an 11-time Stanley Cup champion....

Impressive as it might be, one can then go to the Canadiens’ web site and see “Home of the 24-time Stanley Cup Champions."

Meanwhile, over in Pittsburgh, the web site simply announces, “Stanley Cup Champions.” Doesn’t get much simpler than that.

Slipping down a notch on the “history” ladder is the San Jose Sharks, where you will find that they’ve chose to hang their hat on the fact that they are “Home of the 2008-2009 President’s Trophy.” That’s akin to being “Sloppy Sam’s Grease Pit: Home of the Bowel Bomb Burger.”

And then you can compare that to the “history,” reflected in the Washington Capitals’ web site… “Back-to-Back Southeast Division Champions.” Well, you have to start somewhere, I guess. And we’ll get back to this bunch.

Back to the martial theme, the Ottawa Senators march into the 2009-2010 season, “A Force United.” United in what? Hating Dany Heatley?

Then there is Tampa, who has this delusion that “Together We Will.” And they have the image of a determined Steven Stamkos, a confident Vincent Lecavalier, and the dwarfish Martin St. Louis to lend heft to that sentiment. 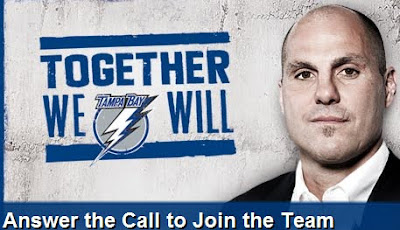 Not only that, if you click onto their main site, you get this puppy-dog face driving the point home a little more, asking fans to “answer the call.” The Lightning are so bad, the only dogs can hear that call. And if “Together We Will” was a winning slogan, would the league have to step in and keep their feuding owners apart? Food for thought.

The Islanders might be the most optimistic, forward-looking bunch, though. Even though they have a rich history (albeit in the dim past), they’ve chose to put a countdown clock on their site…to when tickets are available online. Ooh, I’d better set my alarm clock for Saturday at 1:00.

There might be other teams unfurling other themes on their web sites before too long, but among those who have unveiled their themes for this year, there is no lack of force, passion, or flag-waving… or trophy hoisting, or group hugging, or…

Just drop the freakin’ puck already.
Posted by The Peerless at 7:18 AM 5 comments: