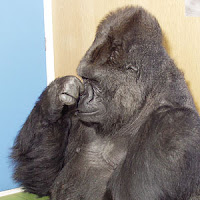 So, was that fun for you?

At least the Canadian military personnel on hand for tonight’s tribute were probably entertained. But that’s about it. The Caps lost their third in a row, 5-2, to the Edmonton Oilers.

It isn’t as if Edmonton played all that good a game, either. They had no answer for the Caps’ forecheck at the start of the game. They averaged almost a turnover a minute (five Washington takeaways, six Oiler giveaways) in the first dozen minutes. Then, the Caps…stopped.
Edmonton scored in the 13th minute – Steve MacIntyre’s first NHL goal – and the competitive portion of the evening was over. Oh, you might not have thought so at 1-0, Oilers, but it was. The Caps spent the rest of the first period, all of the second, and the first 16 minutes of the third pretty much letting Edmonton – a vastly inferior team physically – skate anywhere they wanted.

You had a feeling it was going to be another of these nights when Matt Bradley collected a Dustin Penner giveaway in the first half minute with only open ice in front of the Edmonton goal and shot the puck into goalie Dwayne Roloson’s right pad. It was the first of 19 shots the Caps launched at Roloson in the period, but it was a misleading stat. They were largely the sorts of shots one sees in the pregame warmup – thrown at the goalie from the outside and the goalie getting an unfettered look at the shot.

The fact is the Caps mailed this in. They played about 15 minutes of hockey, split into the first ten minutes in the first period and the last five in the third, when it was far too late. They didn’t skate, they didn’t hit, they didn’t work, and what shots they took seemed to be carefully aimed at the logo on Roloson’s jersey, not that there was anyone within a zip code of getting a rebound had one been available.

Here’s how bad it was…the most effective Cap along the boards was probably Tomas Fleischmann. Now Fleischmann is having a fine year (he had his 14th goal of the year tonight on a great individual effort – the only one of far too many that yielded anything), but he doesn’t have the physical gifts to do a lot of the dirty work along the boards. However, he was the only Cap who looked as if he was making the effort. And if Fleischmann’s effort in that aspect of the game is the best the Caps could do, well…where do we go to inquire about a refund for this one?

You know what?...The heck with it. The Caps gave 15 minutes of effort tonight, and that’s about all we have to offer here.
Posted by The Peerless at 11:23 PM 1 comment:

The Index of Specialness

Think special teams matter? We did a little simple arithmetic, as illustrated in the table below. We just took the power play success rate for each team, added to that the penalty killing success rate, and created an "index of specialness:" 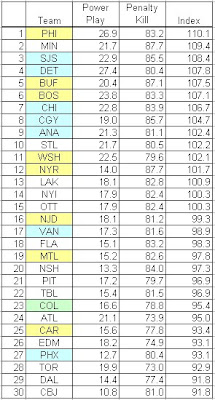 The "IoS" confirms what the intuitive reader already suspects -- special teams matter. Breaking the 30 teams into three ten-team segments, eight of the top ten in the IoS are in the playoff seeding, five of the next ten. Down there in the bottom third, only three teams are in the playoff mix as of this morning.
Just some doodling to occupy you while you're eating your Cap'n Crunch.

Thanks to James Mirtle, whose entry on special teams got us to doodling
Posted by The Peerless at 7:02 AM 1 comment: