The Peerless Prognosticator is ON THE AIR!!! -- Game 39: Capitals at Islanders, April 6

The Washington Capitals return to the scene of their worst loss of the season on Tuesday night, the smell of the 8-4 loss to the New York Islanders at Nassau Veterans Memorial Coliseum still fresh.  The Caps shook off that loss in their next two games, sweeping the New Jersey Devils in a two-game set to sweep the season series, but it is the Islanders that the Caps might face down the road, and making a statement that a shellacking such as they suffered last week is not to be repeated has to be on their minds.  On the other side, the Isles have had one contest since their blowout win, a 3-2 Gimmick win over the Philadelphia Flyers on Saturday.  It lifted their record to 5-2-0 over their last seven games.

Rookies can have a hard time cracking a Barry Trotz-coached lineup, but that has not been the case with Oliver Wahlstrom, who has dressed for 31 games as a rookie this season (after appearing in nine games last season), all of them in the last 32 Islander contests.  He ranks highly among his rookie cohort, standing fourth in goals scored (nine), tied for eighth in points (16), tied for 12th in plus-minus rating (plus-4), tied for second in power play points (seven), eighth in shots on goal (64), and eighth in shooting percentage (14.1; minimum: 20 shots on goal).

Wahlstrom has paid early returns to justify his selection as the 11th overall pick in the 2018 Entry Draft.  He ranks eighth in his draft class in goals (nine) and 11th in points (16). He has been getting more ice time as a result of his performance.  After averaging 10:51 per game over his first 15 games this season, he averaged 13:01 over his last 16 games.  Wahlstrom had a hot streak over seven games in mid-March, going 5-2-7, plus-2, but he is without a point in his last four games.  He is 2-0-2, minus-1, in three games against the Caps this season, his only career appearances against the Caps to date.

Defenseman Noah Dobson was taken one spot after Wahlstrom in that same 2018 Entry Draft, the fifth defenseman taken in the first 12 picks of that draft, one that was rich in defensemen at the top (Rasmus Dahlin, Quinn Hughes, Adam Boqvist, Ty Smith, and K’Andre Miller were taken in the top 22 picks, in addition to Dobson).  Now in his sophomore season, Dobson has already established career highs in goals (three), assists (nine), points (12), plus-minus-rating (plus-7), shots on goal (44), and average ice time (16:42 per game).

Dobson was a casualty of COVID protocols, missing eight games before returning to the ice last Thursday against the Capitals.  It was an unfortunate interruption for Dobson, who was 2-3-5, plus-7, in ten games before he was laid up.  The Islanders were 4-4-0 in the eight games he missed.  If there is an odd fact associated with his play this season, the Islanders are 10-1-2 in 13 games in which he skated less than 16 minutes.  Dobson is 1-1-2, plus-1, in three games against Washington this season and 1-1-2, plus-2, in five career games against the Caps. 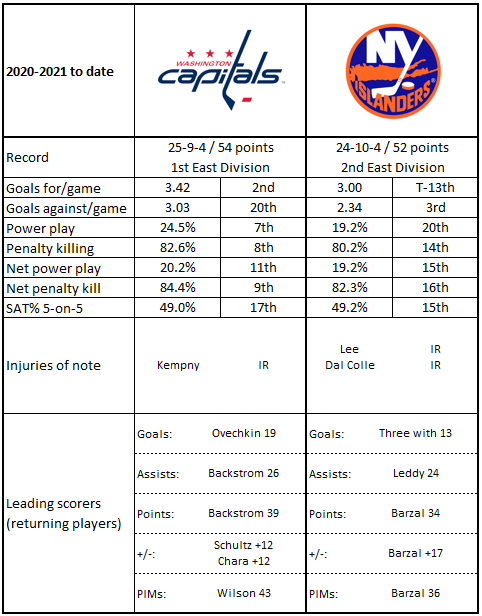 1.  Three of the last four Islander wins have come in extra time, their 8-4 win over the Caps being the exception.

3.  New York has the best scoring offense on home ice this season (3.94 goals per game) and the best home ice goal differential (plus-1.83).

2.  The Caps have the best last ten-game record in the East (7-3-0) and are tied for the longest winning streak (two games…it’s a competitive division).

3.  Washington has the fourth-worst net power play on the road this season (10.6 percent, after shorthanded goals are accounted for).

4.  On the other hand, the Caps have the fourth-best net penalty kill on the road (88.7 percent).

5.  Washington has 22 first period goals on the road this season, second-highest in the league (St. Louis: 23).

If you want a trivia question to impress your friends and confound your enemies, here is one… “Who was taken with the pick after Brad Marchand was taken by the Boston Bruins in the 2006 Entry Draft?"  You know by now that it was Cal Clutterbuck, taken in the third round (72nd overall) by the Minnesota Wild.  He spent eight years in Minnesota, where he immediately established a reputation as an enthusiastic hitter.  In each of his first three full seasons, 2008-2009 through 2010-2011, he recorded more than 300 hits, one of only four players over that period to post at least one such season and the only one to do it more than once (Brooks Orpik, Tuomo Ruutu, and Dustin Brown were the others).  He has hardly slowed down.  In his 13 full seasons in the NHL, including this one, he has been credited with more hits than any skater (3.265) and ranks fourth among all skaters with at least 1,000 hits over that period in hits-per-60 minutes (213.7).

Clutterbuck hasn’t slowed much in his enthusiasm for hitting, but his offense has tailed off.  After posting 96 goals and 168 points over 572 games and nine seasons with Minnesota and the Islanders, including six seasons with double-digit goals, he has only 27 goals (no double-digit goal seasons) and 77 points in 288 games over his last five seasons, including this one.  He is in a slump at the moment with one point (an assist) over his last 13 games, but over that span he is still second in the league in credited hits (60).  Clutterbuck is 0-2-2, minus-2, in four games against the Caps this season and 7-6-13, minus-3, in 32 career games against Washington.

Cal Clutterbuck is not the only player who will take the ice Tuesday who is enthusiastic about his physical game. With his next credited hit, Tom Wilson will have 100 career hits in only 32 games against the Islanders, second among active Capitals (Alex Ovechkni: 116).  His 108.7 hits per 60 minutes lead active Caps by a wide margin and rank fifth among all NHL skaters appearing in at least 30 games against the Isles.

That, however, is but a part of Wilson’s game these days.  With 0.31 goals per game, he on a pace to finish with his third consecutive season over 0.30 goals per game, and his 0.79 points per game is on pace to establish a career high by a considerable margin (0.65 points per game last season).  Wilson’s 2.75 points per 60 minutes lead all Capitals appearing in at least 20 games.  And, his roles are varied.  For example, he is the only forward on the team this season averaging at least 1:00 of ice time both on power plays and penalty kills.

Wilson came out of his seven-game suspension in March smartly.  Since returning to the ice on March 20th, he is 2-4-6, even, with two multi-point games over eight games.  Wilson has also built a consistency into his game of late, only twice going consecutive games without a point over his last 13 contests. Not Connor McDavid consistency, but for someone with a reputation among fans as being little more than fists with a helmet, it is evidence of his continuing to build a more well-rounded game.  Wilson is 1-1-2, minus-3, in two games against the Islanders this season, 6-7-13, minus-3, in 31 career games against New York.

It does not get simpler than this.  Players might downplay this as another game against a team with which they are fighting for the top spot in the East Division, but that 8-4 loss has to sting still.  Everything that could go wrong seemed to in that game, starting with goalie Ilya Samsonov getting decked by a teammate 30 seconds into the contest and having to take a seat for a while.  On the other hand, it was the first loss suffered by the Caps on the road against the Islanders in the Barry Trotz era on Long Island (4-1-0).  Four wins is good, five is better.

Posted by The Peerless at 1:30 PM No comments: