The Washington Capitals return to intra-divisional play on Thursday night when they open a back-to-back, home-and-home set against the New York Islanders in Brooklyn before wrapping up the set in Washington on Friday.

The Capitals will be looking to stretch their winning streak to three games, the first time since their five-game streak to close 2017 and open 2018.  This is the fourth time they carried consecutive wins into a game since that streak without having reached a third consecutive win.

The Isles, who have been idle since Sunday, are seeing their playoff hopes sink into something resembling more an atoll, as in “the Islanders have no chance…atoll” of reaching the postseason.  No chance would be a bit strong, since the Isles do remain eight points out of the second wild card spot and three teams to pass.  But at this time of year, making up such a margin is difficult.

Things have not been made easier for the Islanders having to endure an eight-game losing streak (0-4-4) before they snapped it on Sunday with a 5-2 win in Calgary against the Flames.  It was a tough run for New York, who spent seven of those nine games on the road and have not played consecutive games on home ice in a month (and won’t until this series is over, after which they have a five-game home stand).

Offense has become an issue for the Islanders, who until they exploded for five goals against Calgary had scored more than three goals in 12 consecutive games.  As it is, including the win over Calgary, the Islanders have been outscored by a 36-31 margin over their last 13 games over which they have a record of 3-6-4, two of those wins coming via shutout.

Over those 13 games, Jordan Eberle has managed to maintain a productive level of output.  His five goals lead the club over that span.  In his first season in Brooklyn after spending his first seven NHL seasons in Edmonton, his 24 goals this season are third on the team, one of three Islanders with at least 20 goals this season (Anders Lee (33) and John Tavares (31) are the others).  Eberle is among the more consistent and reliable goal scorers in the NHL, having hit the 20-goal mark in each of his last six full NHL seasons (not including the abbreviated 2012-2013 season in which he had 16 in 48 games).  Eberle does it in the context of gentlemanly play.  He has just 137 career penalty minutes in 575 games (by way of comparison, Tom Wilson has 164 penalty minutes this season in 65 games) and has received votes for the Lady Byng Trophy five times in the last six seasons.  This season, Eberle has also been consistent in home and road situations with 24 points in 31 road games (11-13-24) and 24 points in 37 road games (13-11-24).  Eberle is 1-3-4, minus-3, in 11 career games against Washington.

Nick Leddy has established himself as a durable, productive defenseman.  Over the last five seasons, including this one, only five defensemen have played in more games than Leddy (391): Karl Alzner (398), Keith Yandle (397, Drew Doughty (394), Brent Seabrook (393), and Ryan Suter (393).  He has 194 points over that span, putting him in position to be the 22nd defenseman in that span to hit 200 points overall.  His 151 goals puts him among the top-20 in that statistic.  This season, Leddy is a top-20 performer in goals (10/T-12th) and points (40/T-18th).  Although his ten goals leads Islander defensemen this season, how he got there is a bit odd.  Leddy scored six goals in the Islanders’ first 22 games this season, the last being an overtime game-winner in a 5-4 win over Philadelphia on November 24th.  Then, he went 30 games without a goal before finding the back of the net in a 4-3 win over Columbus on February 3rd.  Starting with that game, Leddy has four goals in his last 17 games, although he did manage to go a dozen straight without one in that span, a streak stopped when he scored against Calgary on Sunday.  On the other hand, Leddy is minus-30, the second worst plus-minus among 293 defensemen to dress in the NHL this season.  Leddy is 1-5-6, minus-2, in 19 career games against the Caps.

That leaves Christopher Gibson, who had been playing with Bridgeport in the AHL until Greiss’ injury.  Gibson has three appearances, all of them this month, and he has yet to lose a decision in regulation (1-0-2).  He lost in overtime to the Pittsburgh Penguins, 3-2, stopping 47 of 50 shots, on March 3rd.  He followed that with a Gimmick loss to the Edmonton Oilers, allowing only one goal on 36 shots before succumbing in the freestyle phase.  That he would allow the game-winner to Sidney Crosby against the Pens and the shootout winner to Connor McDavid against Edmonton hardly seems fair, or his fault.  In his last outing he got his first win this season, stopping 50 of 52 shots in the 5-2 win over Calgary on Sunday.  It was the first time a rookie Islander goalie recorded 50 or more saves since Billy Smith made 55 saves in a 5-3 loss to the Philadelphia Flyers on November 22, 1972, in the Islanders’ inaugural season.  Gibson has faced the Caps once, stopping 29 of 32 shots in 4-3 overtime win on April 5th last season. 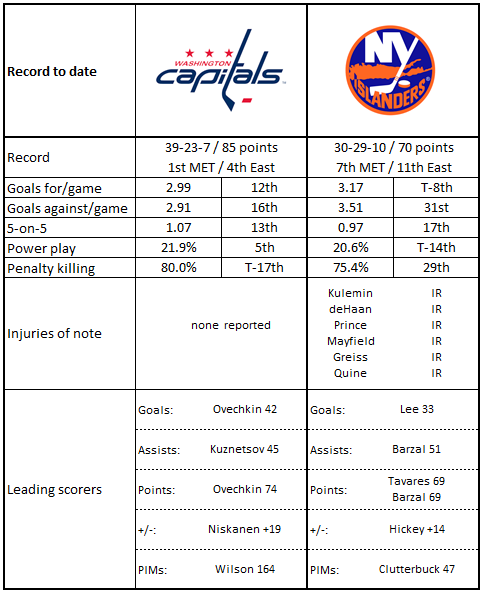 5.  Outshooting opponents is not the Islanders’ thing, and even when they do it, they are not successful. Only Anaheim has outshot opponents less often (20 times) than the Islanders (22 times), and New York’s seven wins when doing so is tied for fewest wins in the league (with Vancouver).

1.  This will be the Capitals’ 13th and next to last back-to-back set of games of the regular season. It is the second back-to-back set played against a single opponent. They split a pair of decisions against the Carolina Hurricanes in Games 44 and 45 on January 11-12, losing the first game, 3-1, at home, and then winning by a 4-3 margin in Carolina.

2.  Washington swept only one of their first 12 back-to-backs, beating Tampa Bay at home, 3-1, in Game 24 on November 24th, and then going to Toronto and knocking off the Maple Leafs, 4-2, in Game 25 the following night.

3.  The Caps lost both ends of a back-to-back twice this season. The first came in Games 36-37 in mid-December when they lost at Arizona in overtime, 3-2, and then dropped a 3-0 decision to Vegas. The second time came in January in Games 46-47 when Washington lost to New Jersey, 4-3, in overtime in Newark, and then they lost to Montreal at home the following night, 3-2.

5.  Washington is 5-4-0 at home in back-to-back sets, 6-6-3 in road games in those sets. The Caps have not had both ends of a back-to-back at home this season; they had one in which both games were played on the road, that being in their first one in Games 5-6 back in October. They won in New Jersey against the Devils, 5-2, and then they were pasted by the Flyers in Philadelphia, 8-2.

Here is the complete history to date of the first dozen Caps back-to-back games (from hockey-reference.com; click for a larger image): 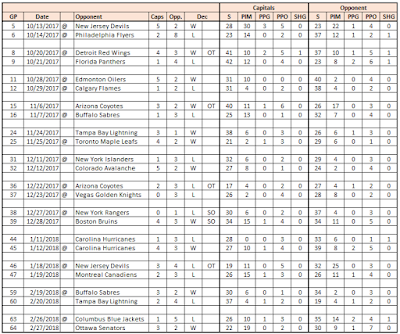 In this year’s rookie class, no skater is close to Mathew Barzal in the points race.  With 69 points in 69 games, he is 14 points clear of Vancouver’s Brock Boeser (likely out for the season with an injured back), and he is the only rookie having appeared in more than five games this season averaging at least one point per game (Boeser is next at 0.89 points per game).  And while he has a bit of an issue of consistency, he has not showed signs of slowing down.  Consider his last 17 games.  He has points in only eight of those contests, but he also has five multi-point games in that stretch, including a five-point (all assists) night in a 7-6 overtime win over the Detroit Red Wings on February 9th.  Perhaps uncommonly for a rookie, his production has not been weighted to either home or road bias.  He is 8-27-35 in 32 home games and 10-24-34 in 37 road games this season.  He is not off to a great start in March, though.  After four straight months with at least 12 points, Barzan has only two points in five games in March.  Then again, there is that whole scoring-points-in-bunches” thing lurking.  In three career games against the Caps, Barzal is 0-1-1, plus-1.

There was a fair amount of attention and trepidation last fall as the season dawned as to whether the Washington Capitals could be successful with a pair of rookie defensemen – Madison Bowey and Christian Djoos – getting significant minutes. Less attention was paid to the fact that the Caps lost a very productive fourth liner in Daniel Winnik without a clear cut candidate to replace him on a checking line. The Caps might have come around to a solution to that matter in Chandler Stephenson. Before this season, Stephenson dressed in just 13 games over two seasons, spending most of the last four years skating with the Hershey Bears. However, he has managed to work his way into getting a sweater on a regular basis this season, and it has paid off in terms of his being a player to watch going forward.

Despite playing in just 55 of the Caps’ 69 games this season, Stephenson is tied for 34th in points in his rookie class (16). His plus-11 is tied for fifth among rookies, and only four rookies having recorded at least 25 shots have a better shooting percentage than he does (17.8). It is that last statistic that is, well, odd. So far this season, 74 rookies have appeared in at least 25 games. Of that group, Stephenson has fewer shots on goal per game (0.51) than any of that group save for Colorado’s Anton Lindholm, who happens to be a defenseman (0.47). One might expect that this will be a part of his game that is expressed later in his development. But one thing he did just fine against Winnipeg the other night was break up a potential scoring chance for the Jets late in overtime that led to the Caps’ final rush and Evgeny Kuznetsov’s game-winning breakaway goal. That kind of hustle will always find a place in the lineup. Stephenson has three assists and is plus-4 in two career games against the Islanders.

By the time the Capitals take the ice on Thursday night to open this back-to-back set with the Islanders, they could find themselves once more looking up in the standings at the Pittsburgh Penguins, who visit the Rangers in New York on Wednesday night. It makes these games against a weaker opponent important to win. Eight points behind the second wild card spot with 13 games to play gives the Islanders faint hope at best, and less and less to play for with each passing game. Tack on the fact that the Isles are losers of eight of their last nine decisions, and the Caps have to jump on them and stand on their throats. Doing it on consecutive nights in the NHL is not an easy task, but this is the part of the remaining schedule that gives the Caps a bit of a break. They need to take advantage of it.

Posted by The Peerless at 5:38 PM No comments: