The Peerless Prognosticator is ON THE AIR!!! -- Game 44: Capitals at Senators, April 18th

“Hey cuz…why do they call it a ‘regular’ season?  Is it ‘cuz it heads to the outhouse every morning after its second cup of coffee?”

No, Cheerless, although Florida’s season seems to be a big steaming pile…

Why is that, Cheerless?

“Cuz it’s cheap to travel there.”

“Well, they’re on that metrical system up there…”

“Yeah, that, too. But it’s like I heard George Carlin say once, ‘Kilometers are shorter than miles. Save gas, take your next trip in kilometers.’  So whenever I take a trip, I try to take one in Canada.”

Yours is a special kind of wisdom, Cheerless.

But back to the game.  The Caps open this road trip with a visit to Ottawa to take on the Senators, a team that might be righting their ship after hitting a reef and losing five straight.  Since that five game losing streak the Senators have won three in a row – a 3-1 win in Philadelphia over the Flyers, a 2-0 shutout of New Jersey in Newark, and – after having a game in Boston postponed – beating Carolina, 3-2.

One thing Ottawa has been able to do in their three-game winning streak that they were not able to do in the five-game skid is kill penalties.  They were only 14-for-18 (77.8 percent) in the five games, far below their second-best in the league 88.1 percent mark.  In the three-game winning streak they are 9-for-10 (90 percent).

What has not improved is the power play.  In the five game losing streak the Senators were 1-for-21 with the man advantage (4.8 percent).  They are only 1-for-12 in their three-game winning streak (8.33).

Ottawa is an offense-challenged team, but Daniel Alfredsson just seems to keep going.  This is not among Alfredsson’s best seasons, not surprising given this is his 17th season (all with Ottawa).  But he does have three points in his last four games (2-1-3) and is the only Senator with two goals in their three-game winning streak.

At the other end is Peter Regin.  When Regin finished the 2009-2010 season with 13 goals in 75 games, he was among the top-ten rookies in that statistic, and good things might have been expected of him.  But then he sustained a series of shoulder injuries that started when he was pushed into the boards by current Capital Joey Crabb in a February 2011 game.  That injury ended his 2010-2011 season, and he managed to play only ten games in the 2011-2012 season.  This season he has yet to score a goal in 27 games, and he has only one point in his last 17 contests.  From "promising player" to "will he get a sweater tonight?"

One player who has not struggled with injuries, or anything else for that matter, is goalie Craig Anderson.  The 31-year old Anderson brings a 1.55 goals-against average into this game.  If he sustains that level of performance it will be, by far, the best goals-against average in the post-Original Six era.  Among goalies playing in at least half of his team’s games starting with the 1967-1968 season, the lowest goals-against average was recorded by Dallas’ Marty Turco in 2002-2003 (1.72).  Anderson will not appear in half the games of an 82-game season, of course, this being an abbreviated season.  He has not even appeared in half of Ottawa’s games so far this season (19 of 42 contests), but his record is no less remarkable – 10-6-2, 1.55, .949, with three shutouts.

Here is how the clubs compare overall this season… 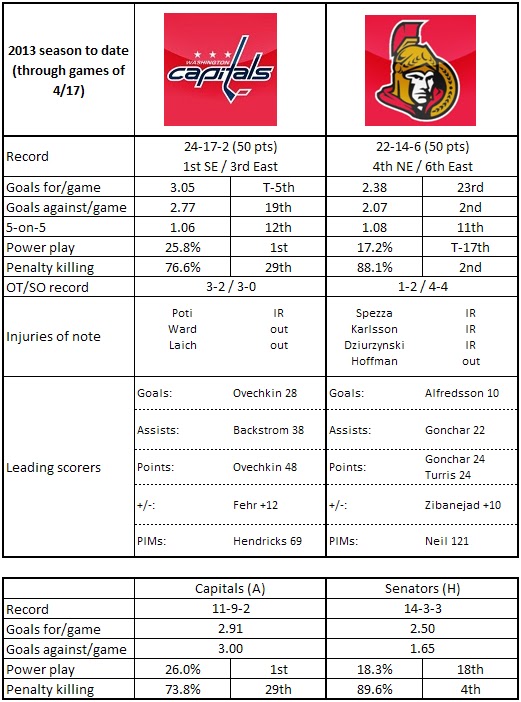 1.  Ottawa does not win with offense.  In games in which they allow more than two goals the Senators are 4-8-3.  They have only ten games out of 42 on their record in which they scored more than three goals.

3.  You might think that a team that relies so much on goaltending and defense would play in – and be successful in – a lot of one-goal games.  Not so.  Ottawa is just 10-9-6 in one-goal decisions.  However, they are 12-5 in decisions by more than one goal.

5.  Ottawa has only one player who has scored ten goals with the club this season.  Daniel Alfredsson has ten, and it took him 39 games to get there.

2.  Only one team (Toronto) has more wins this season than the Caps in games in which they have been outshot.  Washington has 15 such wins.  That fact would be much more impressive if the Caps had not been outshot in 31 of 43 games.

3. Mike Green has played in only 30 of 43 games, but he still ranks in a tie for 16th in power play scoring among defensemen.  Seven of his nine assists on the season have come on the power play.

5.  Braden Holtby is in select company.  In the post-Original Six era, only four goalies who have played in at least 50 games in their first three seasons posted an aggregate save percentage better than Holtby’s .921: Tuukka Rask (.930), Marty Turco (.928), Niklas Backstrom (.923), and Roman Cechmanek (.923).

It has been quite a season for the 23-year old rookie.  He went from going 5-7-12, plus-8 in his first seven games with the Tampa Bay Lightning (including a goal and an assist against the Caps on Opening Night) to going 4-8-12, minus-11 over his next 28 games, then getting traded to Ottawa with a fourth round draft pick for goalie Ben Bishop.  He is just 1-1-2, plus-3 in six games with the Senators in a little more than 14 minutes of ice time a night.  But Conacher is a fighter.  He has had to be to reach this level.  He underwent a serious surgical procedure shortly after birth to correct a birth defect and that might have left him unable to walk properly.  He was diagnosed with diabetes as a child.  Then there is his size.  At 5’8”, 179, he is not your prototypical forward.  And with the diminutive size comes large shoes to fill.  He is related to three hockey hall of famers Charlie, Roy, and Lionel Conacher.  Playing the games must be the easy part for this kid.

2.  Don’t forget your own end.  Against a team like Ottawa, a team that plays games with little scoring (4.45 combined goals per game), the temptation might be to cheat or take shortcuts to try to generate offense.  That might open up chances for the Senators.  Tend to business in your own end.

3.  It’s an Ontario thing.  Ottawa, like Toronto, is an oft-penalized team.  This is where the Caps, as they did against Toronto, need to cash in.

The Caps get another chance to test themselves against a playoff-quality opponent that plays a playoff style of hockey – heavy on defense and goaltending.  And this one is on the road, where the Caps…

“Cousin, speaking of travel, did you know that Samuel Johnson once said, “The use of traveling is to regulate imagination by reality, and instead of thinking how things may be, to see them as they are?”

That’s a good point, Fearless, and as we were about to say, this is where the Caps are going to see things more as they are on this trip.  Two games, two Canadian cities, two playoff teams.  They could use a good start to the trip in Ottawa.