It will mean that Nicklas Backstrom will miss tonight's game against the Edmonton Oilers, but we couldn't get over the use of the term, "keep it completely quiet" by Coach Bruce Boudreau.  Ah, but apparently Backstrom is quite the cut-up in the locker room with his Señor Wences impersonations... 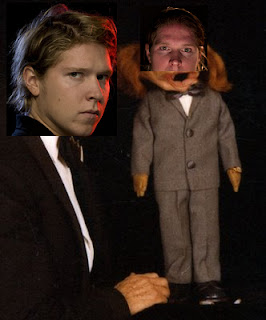 Players were asking him to knock it off.

It really isn't a laughing matter, though, what with Backstrom being the first line center and having never missed an NHL game -- 313 regular season games, 28 playoff games.  He's been there for every one of them.

The Peerless Prognosticator is ON THE AIR!!! -- Caps vs. Oilers, March 9th

The Washington Capitals return home tonight after a successful swing through the Sunshine State, where they won two games in two tries, to host the Edmonton Oilers…

You wrote a song?

“Yeah, a tribute to our guests tonight.”

You wrote a tribute to the Edmonton Oilers? You realize that Wayne Gretzky doesn’t play there any more, don’t you?

Come and listen to a story about a man named Lowe
A poor team exec, his team was growin’ kinda slow,
Then one day he was starin’ at the wall,
And up through the draft came a guy named Taylor Hall.


Well the first thing you know ol Lowe, he’s got a grin,
The fans now said "Playoffs?...Man, we’re in! "
Said "Spring’s the time that’s when we wanna play "
So they loaded up the arena and jumped into the fray.


Well now it’s time to say good by to Lowe and all his kin.
And they would like to thank you folks fer kindly droppin’ in.
You're all invited back again to this locality
To have a heapin’ helpin’ of their hospitality.


Alberta that is. Set a spell, Take your skates off.


Y'all come back now, y'hear?. Please? Please? It’s really a nice place. I don’t care WHAT Nylander thinks! Or Pronger! We coulda had Jagr!”

Very nice…but Edmonton is visiting tonight without their prized number one overall draft pick from last June’s draft, Taylor Hall. The rookie will miss the rest of the regular season as the result of an ankle injury sustained in what was his first NHL fight, a bout with Columbus’ Derek Dorsett. It wasn’t quite fair…Hall, no NHL fights. Dorsett, 31 fights (12 of them this season, a number that has since grown to 15). And it was Hall who went after Dorsett after taking a hit along the boards…not smart.

So now, the Oilers come to Verizon Center without their top goal-scorer and point getter, and this is not a team that was burning bulbs out on the scoreboard with Hall in the lineup. Here is the evidence… 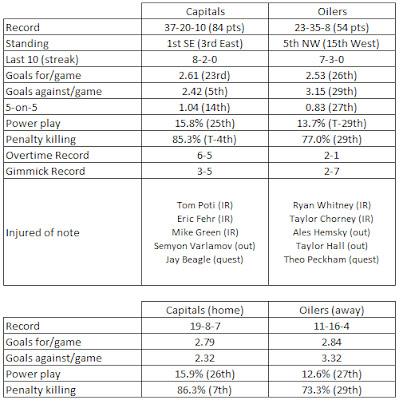 Hall’s absence means Sam Gagner takes over as the Oilers’ top scorer. Gagner is a former first round pick, himself, taken with the sixth overall pick by the Oilers in the 2007 draft. He, like Hall, stepped right into the Edmonton lineup in the season following his draft, finishing 13-36-49 in 79 games. That rookie season remains his high-water mark for scoring. He seems stuck in the 40’s as a scorer, having compiled totals of 41, 41, and so far 42 points in his succeeding seasons. At the moment he is on a bit of a hot streak – 3-5-8 in his last nine games, including a three-point effort against Colorado on March 5th. Nominally a center, Gagner has struggled with other responsibilities for such a position. He has won only 43.8 percent of his faceoffs (he leads the team in draws taken), and he is a minus-15 (worst on the team). He does not have a point in three career games against Washington.

Andrew Cogliano is one of those players you have to keep an eye on. He has comeback a bit from the backsliding he exhibited after a fine rookie season in 2007-2008 (18-27-45). He followed that up with 38 and 28 point seasons (playing in every game in each; he has not yet missed an NHL game in his career), but stepped back up a bit this season with 11 goals and 17 assists in 67 games (a 13-21-34 pace). He does have three game-winning goals so far and has two goals in his last three games. He has a goal in three games against the Caps in his career.

Caps fans will recognize Kuris Foster from his year in Tampa Bay last season and perhaps for his brief stay in Atlanta over a couple of seasons to start his NHL career. Foster is tied for the team lead among defensemen in goals and leads the club in power play goals, three of his five coming with the man advantage. He has not been shy about unleashing his impressive shot – he has 162 shots on goal, good for seventh in the league among defensemen. He had eight shots on goal against Columbus last week, but even with that barrage he has not been successful in finding the back of the net. He has not scored a goal in his last six games. And his shot hasn’t led to other opportunities, or at least opportunities his teammates could take advantage of; he has no assists in his last eight games. He has a goal and five assists in eight career games against the Caps.

Talk about your odd injuries. Nikolai Khabibulin played in a game against the Minnesota Wild recently and stopped a shot on his stick side. No big deal, a save any goalie makes hundreds of times. But Khabibulin “felt something hit me in the eye.” After suffering disturbances to his vision he had tests that revealed bleeding behind his eye – seems it was an ice chard from the shot that did him in. He had to keep from having his blood pressure increase to prevent the condition from getting worse, so he has been more or less incapacitated since the condition was revealed. He is expected to return tonight against a team he has faced 21 times in his career to an 8-6-3, 2.12, .914 record.

The Caps are facing a team tonight that has an awful penalty killing record on the road (29th at 73.3 percent). The Caps do not the greatest power play at home, by any means – 26th in the league. A part of that is Alex Ovechkin’s record with the man advantage at home… no goals in 34 home games. One has to think this streak cannot go on forever, and tonight is the best opportunity he might have to end it.

2. No peeking. The schedule gets tougher for the Caps after this game with six straight games against teams in the playoff hunt. The temptation is to look ahead and take a game like this – against a team without its big star playing out the schedule – for granted. Do that, and it’s a recipe for “boo stew.”

3. Eye Test. Nikolai Khabibulin is likely to return to the net tonight after missing a stretch with that eye injury. Make him look for the puck. Shoot early, shoot often, and – as much as making him look around – he can’t stop what he can’t see. Get in his face. Crowd him. He’s been out and is likely rusty, especially given the nature of the off time due to the injury. Setting a high tempo in shots is something he might not be up for.

In the end, this is one of those matchups that fans might think, “pfft…piece o’ cake.” And if the Caps don’t live up to that sentiment, it could get ugly. The Caps have shown an inability to get an opponent down and stand on their throats this season, giving up early goals and having to come from behind late. Stop tempting fate. End this early.