The Peerless Prognosticator is ON THE AIR!!! -- Caps vs. Lightning, December 15th

And for tonight’s back-end of a back-to-back weekend, we have what is something of a rarity lately…a divisional matchup (we also have all of our usual guests out holiday shopping...). Over the next 34 days, the Caps play Southeast Division teams twice – both times against the Lightning. 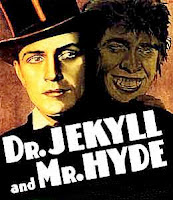 And aren’t the Lightning the Jekyll and Hyde team of the 2007-2008 season. By day (or on the road), they are the Henry Jekyll with a 3-11-1 record. By night (in the confines of St. Pete Times Forum) they are the Edward Hyde that commits all sorts of evil acts on visitors on the way to an 11-4-2 record.

This is a home game for the Bolts, so the Caps will have their work cut out for them. The disparity in the numbers seems a reflection of precisely the kind of team Tampa Bay is -- top heavy with talent. At home, the Lightning can exploit favorable matchups, but on the road the deficiencies in talent underneath the top group are laid bare when those teams can do a better job of using matchups and last change to get the players they want onto the ice against Tampa's big guns.

If you're looking for a "road warrior" among the Caps, Alex Ovechkin immediately comes to mind, of course. In fact, he does lead the team in road scoring (10-9-19 in 16 games). But this might be a night for Viktor Kozlov to shake some dust off. He has had some career success against the Lightning (6-24-30 in 41 games), and he is third on the Caps in road scoring this year (3-7-10 in 16 games).

Then, there is Alexander Semin. Even with the injury bug that hit him to start the year, he has only two goals in 15 games. If the Caps have any prayer of getting back into the playoff race, that pace of production has to change for the better. He'll find no better opponent against whom he can start that process. In 14 career games against Tampa, he is 10-6-16.

Just as scoring among the big four at home is a key for Tampa Bay, so the Russians might be for the Caps tonight. It might be especially true given the continuing saga that is Tampa Bay goaltending. Johan Holmqvist is clearly the number one guy for the Lightning, and he has a 5-2-0 career record against the Caps. However, he's been rather grim in his last two outings -- four goals on 22 shots in less than 35 minutes of work against Toronto, and another four goals only six shots in less than 14 minutes work in his last outing, against Calgary. Backup Marc Denis has only one win this year, but that came last Tuesday against Montreal. Flip a coin...

Brent Johnson seems likely to get the start tonight with an opportunity to get the Caps moving back in the right direction. He's had some success against Tampa (4-2-1-2, 2.48, .917 for his career), although he took the loss in the his only appearance against the Lightning this year (four goals allowed in a 5-2 loss in Tampa on November 16th).

This could be a wild one. Tampa is a juggernaut at home, and the new Caps under Bruce Boudreau are a much more aggressive team with the puck. We might see a game on the far side of 10 goals scored....

Posted by The Peerless at 12:04 PM No comments:

Maybe it is a measure of what the Capitals accomplished this week that last night’s 5-3 loss to the Buffalo Sabres can be thought of as “disappointing,” rather than “expected.”

Disappointing in that the Caps couldn’t build on an early lead.

Disappointing in that the Caps gave it up with what goaltender Olaf Kolzig called, “a rookie mistake.”

Disappointing in giving up a goal in the final two minutes of each period – the first two tying the game, the last one clinching it.

Disappointing in not capitalizing on their possession advantage in the first two periods.

Disappointing in that the effort that one might have expected in a game where an opportunity existed to pick up a place or two in the standings was inconsistent.

One could tell that things were amiss when the Caps picked up a pair of too-many-men-on-the-ice penalties in the first 25 minutes of the game (there were three called on the night, the other on the Sabres) – the first of which was called less than a minute into the contest.

And last night was a night for the hockey gods to administer a dose of humility to this week’s object of Caps fans affection – Mike Green. A -3 for the night, and looking like a cornerback victimized on a deep pass when Maxim Afinogenov slipped behind him for a breakaway goal (the second of those last-two-minute goals). Adding insult to injury, it almost looked as if Kolzig might have been able to make the save on the play, but the puck seemed to be nudged by Green at the end of the sequence.

Bruce Boudreau mentioned that, "I didn't think we had 19 players playing to their capabilities.” If one of those 19 had a bulls-eye on his sweater, it was Alexander Semin. Another Cap with a -3, he had a brutal night. For a sniper to register no shots on goal (he had five attempts blocked and missed a sixth) just won’t get it done, and if the Caps’ effort was inconsistent, Semin was an example of that. If his ankle isn’t bothering him, it wouldn’t be terribly surprising to find him out of the lineup for tonight’s game in .

But singling out Semin isn’t constructive, and it isn’t as if he was the only Cap who had problems. No one could be said to have had a good game, and in that cloud there is the hint of a silver lining. They were in this game until the empty-netter, despite a less-than-stellar effort. The power play was aggressive and looked crisp for stretches. The “ooh-and-ahh” factor with the man-advantage certainly has been improved. The penalty killing unit was effective in that no goals were allowed, even if they had their moments where virtual tap-ins were missed by the Sabres. They might even have pulled this one out, had Olaf Kolzig not had his moments (the Derek Roy short-handed “empty netter” when Kolzig whiffed on a lazy one-handed sweep pass -- the rookie mistake -- chief among them, a goal that slammed momentum the Caps had at the time to a halt).

The problem with this game, and perhaps the attitude, might be reflected in a quote from Tom Poti after the game…

“It would have been nice to win four in a row at home. We've got to be ready tomorrow."

Brooks Laich seemed to pick up on it…

“We let this one get away. It's been the story of our season so far."

Nice?...They should have won four at home… did not play an especially good game. The Caps handed them two points. And given where the Caps are in the standings, they need to be ready every night, or it’s going to be a winter of “coulda, woulda, shoulda’s.”