The Peerless Prognosticator is ON THE AIR!!! -- Caps vs. Blue Jackets, March 31st

The Caps look to get back on the winning track tonight when they host the Columbus Blue Jackets at Verizon Center. The Blue Jackets come into this game…


“Weyapiersenwah.”
You just dragged your fingers across a keyboard to come up with that, didn’t you?


“Yeah, all this crap about the Blue Jackets being named because they want to celebrate patriotism, pride and the rich Civil War history in the state of Ohio and, more specifically, the city of Columbus…yadda yadda yadda.”
You don’t think you’re getting enough credit?


“Got that right…”
Columbus comes to Verizon Center with their own blue jackets with only the proverbial “pride” to play for. With 79 standings points they are 11 points behind eighth-place Chicago in the Western Conference. And the Capitals have had success against Central Division teams so far this season, going 4-1-0 (A 3-2 loss to Detroit being the only blemish). But the Blue Jackets have had success against the Southeast Division, too, with no losses in regulation (4-0-1) to a Southeast Division team. For what it’s worth, the teams met twice in the preseason, the Caps winning both contests. Then again, Matt Hendricks had a hat trick in the first meeting (a 6-2 Caps win), so let’s not get carried away with that. Here is how the Blue Jackets square up with the Caps in the regular season: 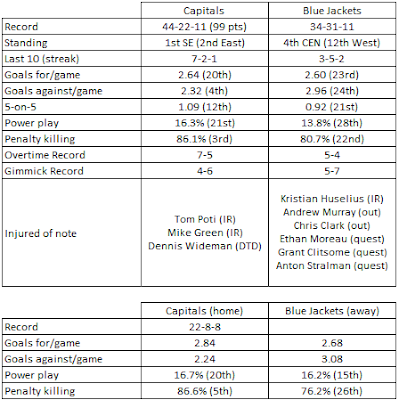 If Columbus is going to miss the playoffs this year – and this will be the ninth time in ten seasons of franchise history that they will – there is some hope for the future in a pair of young forwards. Derick Brassard was the sixth overall pick in the 2006 draft, and after losing much of the 2008-2009 season to a shoulder injury has come back with scoring improvements in each of the last two seasons. This season he has already set personal bests for goals (15), assists (28), and points (43), and is second on the club in power play scoring (13 points). He has struggled of late, though, perhaps owing to a hand injury that put him on the shelf for eight games. Since returning to the Columbus lineup on March 9th, he is 1-3-4, minus-5 in 11 games. If there is a plus, Brassard has been more productive on the road (8-16-24, plus-1 in 32 games) than he has been at home (7-12-19, minus-7 in 36 games). Against the Caps, Brassard has a single assist in four career games.

The other forward that might bring hope to a forlorn Blue Jacket fan base is Jakub Voracek, taken by the Blue Jackets seventh overall in the year after they selected Brassard (those top-ten picks are a habit with the Blue Jackets; they have had ten in eleven years). After spending one more year with Halifax in the QMJHL after being drafted, Voracek joined Columbus for the 2008-2009 season and posted 38 points in 80 games. He has improved on that since, going 16-34-50 last year and 14-32-46 in 74 games this year with a chance to set career bests in goals, assists, and points. Unfortunately, though, he has been suffering the same frigid production as his teammate Brassard lately. He does not have a goal in his last ten games (only one assist) and is a minus-8 over that span. However, he is (like Brassard) more productive on the road, going 6-19-25, plus-3 in 37 games, versus 8-13-21, minus-1 in 37 games. Voracek has three assists in four career games against Washington.

About 700 miles east of Moscow is the city of Izhevsk, birthplace of Columbus defenseman Fedor Tyutin. From there he found his way to the Big Apple, where he spent four seasons with the New York Rangers. The Blue Jackets’ leading scorer among defensemen (6-20-26) is now in his fourth season with Columbus and has an outside chance at posting his third straight 30-point season with the Blue Jackets…a very outside chance. He has gone ice cold (see a pattern here?) in terms of scoring – no points in his last nine games and only 1-1-2 over his last 17 contests. Perhaps part of the problem is the lingering effect of having been one of Matt Cooke’s victims on his road show of horror this season. Cooke drilled Tyutin from behind in a 4-1 Blue Jacket win on February 8th, a hit that earned Cooke a four game suspension. Tyutin did not miss any games as a result of the hit, but he is also only 1-5-6 in the 23 games since. He still leads all Columbus defensemen in both goals and assists, but the fun fact concerning Tyutin’s scoring is that Thursday is the only day of the week on which he does not have a point this season (eight games played). In 19 career games against the Caps, Tyutin is 2-3-5.

It hardly seems to matter much which of Steve Mason or Mathieu Garon tends goal for the Blue Jackets. Mason is 2-5-4, 2.90, .899 in his last 11 appearances since winning four straight to close February. Garon hasn’t been much in relief, either. Since winning consecutive decisions to finish November, he is 4-11-5, 3.17, .885 in his last 25 appearances.

As for Mason, one has to wonder. Here is a goalie who in 2007 was the Ontario Hockey League goaltender of the year, who in 2008 won a gold medal with Team Canada in the World Junior Championships (not to mention being named top goaltender and MVP of the tournament), and who in 2009 won the Calder Trophy as the NHL’s top rookie and was a Vezina Trophy finalist. In the two seasons since, however, Mason is 44-45-15, 3.01, .902. It is hardly the sort of progression expected of a goalie with Mason’s pedigree. Playing the Caps might be just the tonic for Mason. He is 3-1-0, 1.32, .962, with two shutouts in four career appearances against the Caps.

Garon is with his fifth NHL team in the Blue Jackets after stops in Montreal, Los Angeles, Edmonton, and Pittsburgh. His has been the role of backup for the most part, having played in more than 40 games only twice in his ten NHL seasons. In 272 career games played he has faced the Caps only seven times, posting a 2-1-1, 2.56, .904 record. Last year he faced the Caps twice. He played a total of 12:20 in the two contests. In the first he played all of 1:31 without facing a shot and did not figure in the decision (a 5-4 overtime win for Columbus). In the second he played 10:49 and allowed two goals on four shots. He did not figure in that decision, either, a 3-2 loss to the Caps.

For good or ill, Rick Nash is Columbus Blue Jackets hockey. He probably deserves better. Toiling for a franchise that has known little team success, Nash is in the midst of his sixth 30-goal season in the last seven years. His 259 career goals ranks 31st among active players. He has only three of those goals in his last 17 games. He has yet to score a goal against a Southeast Division team this season (five games played), the only division against which he has failed to record a goal. That could change tonight – Nash has seven goals in eight career games against Washington. And when Nash scores, good things happen for the Blue Jackets. Columbus is 17-3-4 when he scores a goal.

Alexander Semin scored a goal against Carolina on Tuesday, but took a hooking penalty with 3:19 to go in a 2-2 game. It put the Caps on their heels, having to defend a power play late in regulation to preserve at least one standings point. Semin did not see the ice for the remainder of the contest. It happened to end up being the first time this season that the Caps lost when Semin scored a goal (18-0-1). Well, we will see how he responds to the benching, we guess. He has a goal and an assist in each of his last two games, and he has been a streaky scorer this year. He is also 6-6-12, plus-10 in his last 15 games. If he adds to that scoring total tonight, chances are good the Caps will at least keep pace with the Flyers in the Eastern Conference race.


1. Positive Power Play Production. Columbus has struggled on the penalty kill this month (46-for-59; 78.0 percent) and has allowed at least one power play goal in each of their last five games (10-for-15). The Caps are 24-3-4 when scoring a power play goal. Do the math.

2. Milestone Magic. With two more goals, Alex Ovechkin will hit the 300 mark for his career. He has four in six career games against the Blue Jackets, those four goals coming in a pair of two-goal efforts, including this one.

3. Shoot! This is one of those times when the fan’s favorite exclamation might have merit. Columbus is 25th in the league in winning percentage when they are outshot. Put pucks on net, put a “W” in the win column.

In the end, this is the dead portion of the schedule leading up to the playoffs. The Caps completed a successful road trip, playing five games of the six game trip against playoff-eligible teams or teams fighting for a spot. But they looked sluggish against a Carolina team that, frankly, didn’t exactly look like the desperate team they should be as a ninth-place playoff hopeful. Now they get a team with less to play for before the Caps take on Buffalo on Saturday. It is one of those games that can fall through the cracks unless a team is mentally disciplined. Maybe the benching of Alexander Semin sent a message to the rest of the team – finish strong, both in games and to end the regular season.