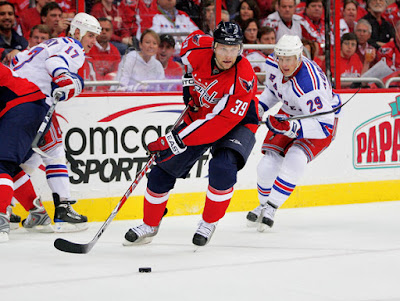 Activity in August in the hockey calendar is infrequent, but not unheard of, even as the days march toward September.  The Washington Capitals dipped into the free agency pool in late-August 2005 to sign a lanky former first round draft pick had a considerable climb up the depth chart at forward for the team that drafted him.

David Steckel was drafted by the Los Angeles Kings with the 30th overall pick in the 2001 draft after a fine freshman season at Ohio State University.  He spent three more years at OSU, recording 50 goals and 105 points in 146 games.  Upon completing his NCAA apprenticeship, he moved on to the Manchester Monarchs of the AHL in the first pro stop of his career.

Steckel’s first (and only) season with the Monarch’s – 2004 2005 – coincided with the last season Bruce Boudreau spent behind the Manchester bench as head coach.  Both would find their way to the Capitals’ organization the following summer, Boudreau in July (signed on to coach the Hershey Bears AHL farm club) and Steckel on this date in August of that year.

After spending two years with the Bears (each with a couple of brief stints with the Caps), the first of which ended in a Calder Cup and the latter of which was a 30-goal season (ending in the Calder Cup final), Steckel made the jump to the big club for good in 2007-2008.

Steckel toiled in relative obscurity as a bottom six center who had heavier defensive responsibilities and who was an excellent faceoff performer.  In his first 267 games with the Caps, he posted a modest scoring line of 22-33-55, plus-2.  It was his 268th game with the club that would be memorable, although not for anything he did at the offensive end of the ice.

Late in the second period of the 2011 Winter Classic, Matt Hendricks was chasing down a puck sliding out of the defensive zone, and Steckel started up ice trailing him when this happened…

While there was concern about Crosby’s condition as he left the ice at the end of the period, the magnitude of the incident would take on a life on its own, especially after Crosby was hit once more by Victor Hedman at the end boards in a game four days later that would be his last game of the 2010-2011 season and his last until late November of the following season.  All in all, Crosby missed 102 of the Penguins’ next 124 regular season games following the Hedman hit through the end of the 2011-2012 season.

It would be Steckel, though, for whom most of the ill feeling was directed.  Perhaps it was a product of the magnitude of the game in which the event occurred, perhaps it was a product of the incident occurring against a heated rival, but there was no shortage of opinion that Steckel was the villain in this case.  It might have started with Crosby’s comments just days after the incident.  But, as the games passed with Crosby out of the lineup, there was the gnawing feeling that Steckel was being viewed as a dirty player, despite nothing in his history to suggest such a view.  Some (well, one) responded with a frame-by-frame look at the hit that suggested it was just an unfortunate accident.

In any event, the incident would follow Steckel around, even after he left Washington.  As it was, he would leave Washington that same 2010-2011 season, traded to the New Jersey Devils in late February with a second round draft pick for center Jason Arnott.

Steckel left Washington having appeared in 291 games, tied for 44th in team history among forwards.  From 2007-2008, when he joined the Caps’ roster for good, until he left in February 2011, Steckel was the fifth-best faceoff man in the league (59.0 percent) among the 156 players taking at least 1,000 draws.  He scored 23 goals in the regular season for the Caps and another four for the club in the postseason, including his only playoff game-winner, an overtime goal against the Penguins in Game 6 of their 2009 series that forced a Game 7…

But David Steckel as a Capital will not be remembered for a goal as much as a chance collision far from the puck with the game’s best player on the biggest regular season stage.  None of that would have happened but for what happened on August 25, 2005.