The Peerless Prognosticator is ON THE AIR!!! -- Caps vs. Sharks, October 15th

The Capitals early tour of division champions of last season comes to an end tonight as the San Jose Sharks – the fourth division winner the Caps will face in their first seven games (the Caps are 1-1-1 thus far against the division champs) -- visit Verizon Center. And this might be the most severe test of the lot. The Sharks finished last season with 53 wins and 117 points to capture the President’s Trophy. Then they went gills up in the playoffs…

“Hey, watch what you say about da Sharks…”

“Dat’s right… and we don’t tink da Shark jokes are very humorous, so if you don’t wanna know what’s what, if you catch my drift…”

What what nothing. You said what first.

So, Don Lino… what’s up with the Sharks?

It looks like a different team this year, Don Lino – lots of changes.

“Yeah, you could say dat, but when you lose when you’re supposed ta win, tings… well, tings change.”

I see… sensitive family subject. But what about their defense? Do they have what it takes to shout down Alex Ovechkin and the Caps offense?

Uh, Don... I think you're mixing up the movies you were in there...

“Don't be a wise guy if you don't wanna be sleepin' with the fishes. The dead ones. Now nod your head if you understand… “

We’re just going to let Don Lino settle down while we take a look at the Sharks. And “change” is a word that does seem to describe this team, despite the fact that they stood atop the league standings last year. Compare the lineup they used in the last game of the playoffs they played last season (a 4-1 loss to Anaheim) to that which skated against the Phoenix Coyotes on Monday: 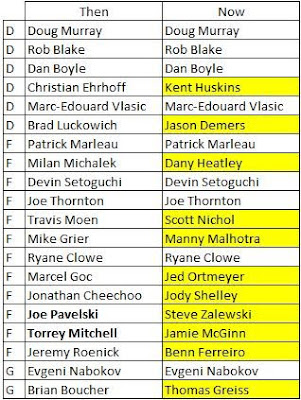 Part of it is injuries – Joe Pavelski has a foot injury, Torrey Mitchell has had tendinitis in his knee. Neither are expected back before later this month. And Jody Shelley (healthy) and Kent Huskins (injury) were scratches in that last game last year. But that still leaves a fair number of new names on the backs of Shark jerseys. And that might account, in part, for a bit of a stumble out of the gate for the Sharks, who are 3-2-1 (1-2-0 on the road).

Clearly, the biggest of the new names is Dany Heatley, now working on his third team in his eighth season. The question is, can Heatley replace the production of Milan Michalek and Jonathan Cheechoo, the players for whom he was obtained from Ottawa. Well, last year, Michalek and Cheechoo finished a combined 35-51-86, plus-8 (and Cheechoo had been in serious decline as a goal scorer since his 56-goal season in 2005-2006). Last year, Heatley finished 39-33-72, -11 as a disgruntled star on a fading Ottawa Senators team. It was his worst set of numbers for a full season since his rookie year with Atlanta. If he achieves his average per-82-game career numbers of 42-46-88, plus-8, he would more than make up for the loss of those two players.

But statistics have never been Heatley’s problem. He is gifted, productive talent. He’s had two 50-goal seasons, two 100-point seasons, he’s been a power-play force (averaging 16 power play goals per 82 games in his career). What he hasn’t been is much of a winner. His high-water mark in that regard was the 2006-2007 season, when the Senators went to the Stanley Cup final. There is a certain “A-Rod” quality to his career so far (although in fairness, Heatley has been a point-a-game performer in the playoffs, not quite "A-Rodish") – big numbers in the regular season, empty in the post season.

It isn’t clear that Heatley will be helped by the move to San Jose either, as the Sharks have another player who has put up big numbers in the regular season with little post season glory to show for it. Joe Thornton has put up big numbers of his own longer than has Heatley (26-57-93, plus 11 on a per-82 games basis over a 12-year career). He has never escaped the second round of the playoffs, his teams losing there on four occasions.

On paper, these two are made for each other – no, really. Heatley is a top-notch goal scorer, and Thornton is one of the best, if not the best assist man of his era. In six games so far, they have combined for six goals and 14 assists. It is not far-fetched to imagine both topping 100 points, with Heatley netting 50-plus goals and Thornton perhaps topping 75 assists.

But is that going to be enough to get the Sharks over the second round hump (they’ve advanced to the third round only once in 17 seasons), let alone to a Stanley Cup? Much might depend on the undercard – players such as Patrick Marleau and Devin Setoguchi. Marleau has spent his entire NHL career with the Sharks – 11 seasons worth coming into this year – so one might be forgiven for wondering if he’s part of the problem the Sharks have had in the post season. Unlike Heatley, who has been a point-a-game producer in the playoffs, Marleau has only once had that level of production in ten playoff appearances. He was stripped of his captaincy in August in favor of Rob Blake.

And Blake is another one. A veteran of more than 1,200 games, Blake has played on one Stanley Cup champion – the 2001 Colorado Avalanche, a team he joined late in the regular season that year. He played on some brutal teams in Los Angeles for years, but he’s played on some very good ones in Colorado and with the Sharks last year. There isn’t a lot of post-season success in his resume.

Coming back to Setoguchi, he had a coming-out party last year, improving his goals from the previous season from 11 to 31, his assists from 6 to 34, and his points from 17 to 65. He’s off and running this year, too, with four goals in six games. But after seeing what happened to Jonathan Cheechoo, who went from 56 goals to 37 to 23 to 12 last year with the Sharks, one might give pause before pronouncing Setoguchi the next big thing in San Jose.

San Jose is a formidable team on paper and on the ice from October to April. They haven’t been anything but a disappointment in the post-season, despite their gaudy regular season success in recent years. This being October, the Sharks will present a formidable challenge for the Caps, one that the Caps failed to meet last year when the teams met in San Jose, and the Sharks pasted the Caps, 7-2.

Time to return the hospitality…