Capitals vs. Penguins: Takeaways and Throwaways from Game 3 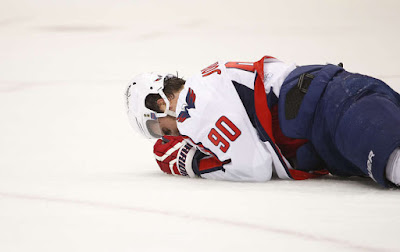 The Washington Capitals find themselves in something of an unfamiliar place after Game 3 of their second round playoff series with the Pittsburgh Penguins, and we will get to that.  But at the moment, that place is down two games to one in their best-of-seven series.  It is the first time in this postseason that the Caps find themselves behind in games, a situation they will want to rectify on Wednesday night. But for now, we have takeaways and throwaways to discuss.


(i) Whether the player attempted to hit squarely through the opponent’s body and the head was not "picked" as a result of poor timing, poor angle of approach, or unnecessary extension of the body upward or outward.
(ii) Whether the opponent put himself in a vulnerable position by assuming a posture that made head contact on an otherwise full body check unavoidable.
(iii) Whether the opponent materially changed the position of his body or head immediately prior to or simultaneously with the hit in a way that significantly contributed to the head contact.

Was the head the main point of contact?  It is apparently so, as it is Johansson’s head that is hit hard enough to twist it sideways… 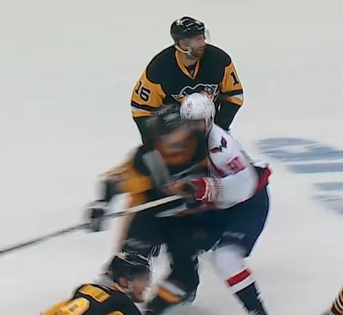 Was the hit “avoidable” in the context of the three criteria?  First, was the player attempting to hit the opponent squarely, or did he “pick” the head exclusive of timing, angle, or unnecessary extension of the body upward or outward?...It appears that Letang left his feet to make this hit…

Did the player put himself in a vulnerable position?  There was commentary during the replay of this that Johansson had his head down.  That is not quite true.  In the full clip above, watch from the 22-second mark until Johansson is hit.  He gets his arm locked up with Evgeni Malkin and does have his head down, but he disengages and is almost upright when Letang, who left his feet, strikes him.

Did the opponent (Johansson) “materially” change his body position so as to contribute to head contact.  That “materiality” threshold is a significant one.  It is one thing for a player to turn his body to the boards just before contact, but in this case Johansson is skating what looks like a steady path.  The position of his body does not change in a “material” sense.

Then there is the lurking history here.  Letang got off without a penalty for a two-handed slash of the Rangers’ Viktor Stalberg in the first round that cost Stalberg three of his teeth.  It is not the sort of “prior bad act” that the league would formally take into consideration of fine or suspension (Letang has one suspension in his career, that in 2011 for two games), but it is there in full living color…

The league has a curious logic when it comes to things like this.  Johansson returned to the game.  That, in and of itself, suggests that Letang will avoid punishment altogether or perhaps get a nominal fine.  But if the league really is intent on getting head shots out of the game, or at least being consistent that players will be held accountable for such plays that involve head contact, Letang will be receiving notice from the Department of Player Safety that such plays are not tolerated.  We will not hold our breath.

The Caps did everything but win Game 3, but then again, winning is the point of the exercise.  Still, they showed no quit when they fell behind, were not distracted when Marcus Johansson was smacked down by Kris Letang, did not let up until the horn went off.  But they cannot waste efforts like this, even if the Penguins were aided by a bit of luck in their scoring.  Game 4 is not a “must win” game, but going down 3-1 to the Penguins is not something Capitals Nation will want to contemplate between now and Wednesday night.  The real takeaway is that this series remains closer than two commuters on the Blue Line at evening rush hour.  It is still anyone’s series.

Posted by The Peerless at 9:57 AM No comments:

For six months we have seen ways in which the Washington Capitals differed from previous editions of the club – an ability to win one-goal games, an ability to hold a lead and come back from a deficit, a resistance to losing streaks.  Now, with the Caps falling behind the Pittsburgh Penguins, two games to one in their playoff series, after the Penguins’ 3-2 win on Monday night, Caps fans will get to see what might be the ultimate test of this team’s differences with those in the past – and ability to stare adversity in the face, in the form of trailing in a postseason series to a bitter rival, and overcoming it.

Pittsburgh put the Caps in a hole early in this game with a pair of goals 60 seconds apart in the first period.  Patric Hornqvist got the home team off and running by setting up in the high slot, in perfect position to tip a drive from Trevor Daley out of the air, the bouncing puck eluding goalie Braden Holtby at the 6:37 mark to make it 1-0.

A minute later, Tom Kuhnhackl double the Penguin lead.  It was a bit of an unfortunate bounce for the Caps, even as the Pens entered the offensive zone with speed.  Matt Cullen darted down the left side through the faceoff circle when he tried to slide the puck across to Kuhnhackl on his right.  The puck slid up the stick of Nicklas Backstrom, popped into the air, and deflected off the numbers on the back of Kuhnhackl’s jersey past Holtby to make it 2-0 7:37 into the period.

Pittsburgh went out to what looked like an insurmountable 3-0 lead late in the second period on a Carl Hagelin goal.  An attempted clear out of the defensive zone by Nate Schmidt ended up on the stick of Phil Kessel, who took advantage of the Caps flying out of the zone by sending the puck to Nick Bonino all alone in the low slot.  Boninio tried to sork the puck around Holtby’s left pad, but Holtby had that path cut off.  The puck slid out from under Holtby, and Hagelin managed to get his stick between Schmidt’s legs to poke the puck in to make it 3-0 with just under five minutes to go in the period.

Pittsburgh has not lost a game this season when leading after two period, but the Caps tested that record in the third period.  It started with Alex Ovechkin getting his first goal of the series, taking a drop pass from T.J. Oshie at the top of the left wing and rifling a shot past the left ear of goalie Matt Murray to make it a 3-1 game 8:02 into the period.

Despite withering pressure, the Caps could not solve Murray again until the last minute.  A one-timer by Alex Ovechkin hit the far post and ricocheted behind Murray to Justin Williams at the near post.  Williams had nothing but open net to shoot at, and he did not miss, getting the Caps to within 3-2 with 53.9 seconds left in regulation.

It would be as close as the Caps would get, though.  There just was not enough time for them to complete the comeback, and the Pens took their first lead in the series with the 3-2 win.

-- Meanwhile…Evgeny Kuznetsov and Andre Burakovsky have combined for two points in this series (a goal by Burakovsky, an assist by Kuznetsov), neither of them marking the score sheet in this game.

-- Alex Ovechkin was a monster in this game.  A goal, an assist, seven shots on goal, 18 shot attempts, nine hits, a takeaway, and a blocked shot in 24 minutes.

-- Less dominant was the third line.  Mike Richards, Jason Chimera, and Burakovsky combined for six shots on goal, no points.  The fourth line was even more quiet.  Jay Beagle, Tom Wilson, and Daniel Winnik combined for two shots on goal (three shot attempts, none by Winnik) and no points.

-- A sign that the end is nigh…Marcus Johansson was credited with nine, count ‘em, nine hits.  He also had six shots on goal, the most he had in a game since December 30th against Buffalo and the most he had ever had in a playoff game.

-- The power play continues its drought after the hot start in Games 1-3 against Philadelphia in the first round.  Going 0-for-4 in this game, the Caps are now 1-for-10 in the series and 1-for-20 in their last six games.

-- On the other hand, the penalty killers continued their amazing run. Killing all three Penguin power plays, the Caps are now 33-for-34 in the postseason (97.0 percent), tops in the league.

-- Every Capital except Justin Williams was credited with at least one hit.  Nine Caps had at leat three hits in piling up a 58-25 edge in that column.

-- Three goals allowed by Braden Holtby seems like an off night, but none could be considered “soft,” and two of them might have been a case of the hockey gods being kinder to the home team than the visitor.  The Kuhnhackl goal will be a snipe from the low slot in the retelling of the tale 20 years from now, but a puck hitting him in the “3” on the “34” on the back of his jersey qualifies as good fortune.  The Hagelin goal was just a matter of the puck having eyes to sneak through to his stick three feet from the goal line.

-- The Caps had a whopping 64-31 edge in shot attempts at 5-on-5, a 28-13 edge in scoring chances, and a 7-4 advantage in high-danger scoring chances.  Their plus-33 Corsi-differential at 5-on-5 was the fifth-highest for a Caps team in the postseason in the post-2004-2005 lockout era (numbers from war-on-ice.com).  Ominously, two of the games in which the Caps had a larger differential came in the 2010 postseason series against the Montreal Canadiens that the Caps lost in seven games.

The Caps did everything right…almost.  They outshot, outhit, and outworked the Penguins almost without interruption.  They had balance of effort in terms of pressure from the scoring lines.  Even when falling behind, they stayed to the script and made life difficult for the Penguins.  But two things that crept into their play from time to time have had a bright light cast upon them – slow starts and lack of production down the roster.  It is not enough to get chances, the Caps have to finish them.  There is no trophy for “Corsi.”  As for the down-roster problem, this is the difference in the series so far.  The Penguins have had production from their “no-names.”  The Caps are still waiting.  If they wait much longer, we might be waiting until October for an end to the drought.