If the Washington Capitals were marching in place in Week 6 with a 2-2-0 record, they advanced smartly in Week 7 with three wins and points in all four games on the schedule.  Just in time, too, for as the week ended, there were only three points separating the top-five teams in the East Division.  Three of the other four teams had multiple games in hand on the Caps, putting more pressure on the Caps to perform at the highest level. 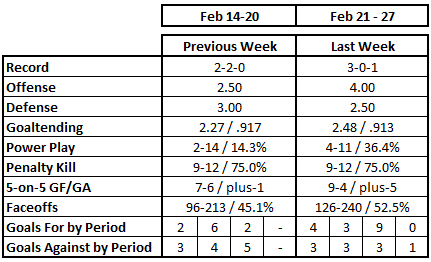 The Caps had four games in Week 7, split between two teams, a pair of contests with the New Jersey Devils wrapped around a pair against the Pittsburgh Penguins. The games against the Devils – one each in Washington and Newark – were only the second and third meetings of eight matchups between these teams this season. Washington swept the first two games, out-scoring the Devils, 9-5.  On the other hand, the Caps and the Penguins, as if there were not familiar enough with one another, played their fifth and sixth games against each other in Week 7.  The Caps gave up a 2-1 second period lead but forced overtime in the first of their matchups this week before losing in overtime, 3-2.  Washington made up for that in the second of the two games, beating the Pens 5-2 in a game that featured two empty net goals.  The teams will not meet again to wrap up their season series until they meet to end the April and begin the May portion of their schedules. 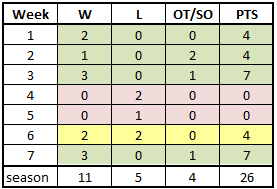 The Caps posted 16 goals in Week 7, and the spread the cheer in doing so.  T.J. Oshie led the club with three goals in four games, and Lars Eller added a pair.  Eleven other Caps had a goal apiece.  In all, 12 forwards found the back of the net.  Only Evgeny Kuznetsov among the 13 forwards to dress for the week did not have a goal, and he missed Saturday’s game against New Jersey with an injury.  It was the opposite on defense, where John Carlson was the only defenseman to post a goal, that in the opening game of the week, a 4-3 win over the Devils.

What Carlson dd not do on his own in lighting the lamp, he did for others.  His six assists led the team for the week, as did his seven points overall.  Oshie led the forwards in points with five.  What was noteworthy about the scoring overall was that 18 of 19 skaters recorded points.  Only Dmitry Orlov failed to put a crooked number on the score sheet.  Seventeen of 19 skaters had at least one even strengthe point.  Five skaters posted ten shots (Alex Ovechkin, Oshie, Carlson, Carl Hagelin, and Jakub Vrana).  Only one of the 19 skaters posted a minus rating (Garnet Hathaway, minus-1).  It might have been the most balanced offense the Caps displayed over a week’s worth of games in some time.

It was not a bad week for the defense, which held the two opponents under their season goals per game averages.  New Jersey posted five goals in two games (2.50 goals per game), while they finished the week at 2.69 goals per game for the season.  And, they allowed just 28.8 shots per game, ninth-fewest for the week.  They allowed 186 shot attempts at 5-on-5 over the four games, fifth-fewest of the 14 teams playing four games.  Their plus-14 on shot attempts at 5-on-5 ranked fifth-best as well among those 14 teams.

Craig Anderson got his first start as a Washington Capital, and while it was not the most efficient of efforts (23 saves on 26 shots/ .885 save percentage), he got the “W” in the Caps 4-3 win over New Jersey to start the week.

Vitek Vanecek continue to shoulder the heaviest workload burden, getting the last three games of the week, going 2-0-1, .2.31, .921 in 181 minutes of play.  Vanecek was consistent over the week, allowing two goals in each of the first, second, and third periods of play.  Those two third period goals he allowed, both in the 5-2 win over Pittsburgh, came on a total of 23 shots faced in the third period over the four games, the result being that his third period save percentage was considerably lower (.913) than in the other two periods (first period: .935; second period: .941).  Vanecek was over .900 in save percentage in all three games he played in Week 7, his longest streak of such games this season.

Washington had the second best power play in Week 7 (New York Islanders: 2-for-5/40.0 percent), quite an improvement over their 14.3 percent mark in Week 6. But it is that inconsistency that has plagued the Caps with the man advantage this season.  They have faithfully alternated weeks over 35 percent and weeks under 15 percent this season, four of the former and three of the latter.

T.J. Oshie had two of the four power play goals the Caps recorded for the week, Alex Ovechkin and Tom Wilson getting the others.  Oshie also led the Caps in point with the man advantage (three); Ovechkin, Nicklas Backstrom, and John Carlson getting a pair apiece.  Ovechkin and Carlson led the Caps in total power play ice time, the only Caps logging more than ten minutes for the week (15:06 and 10:25, respectively). 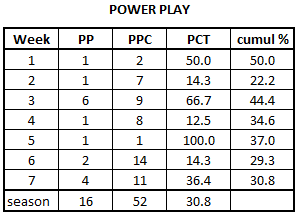 Penalty killers were not as successful as their power play counterparts in Week 7.  The penalty kill has not been very impressive this season, but in three of the last five weeks it was under 80 percent.  The 75.0 percent mark for the week was tied for 19th in the league. 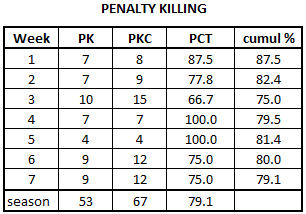 The fine performance was largely the product of Nic Dowd dominating the faceoff circle.  In four games he was 38-for-60 (63.3 percent), 59.5 percent or better in all three zones.  He did get some help, though.  Lars Eller and Nicklas Backstrom each finished within a faceoff win of being over 50 percent for the week, although Backstrom’s 38.9 percent mark in the offensive end was disappointing.

The third periods of games were where the action was for the Caps in Week 7, the nine third period goals they scored being more than half their total for the week.  Part of that was posting three empty net goals – two against Pittsburgh in a 5-2 win and another in the 5-2 win over New Jersey to close the week.  Those three empty net goals left the Caps tied with three other teams for second in the league in that category (five), trailing only Tampa Bay (seven).  The nine third period goals for Week 7 doubled the Caps total (from nine to 18) for the season.

The Caps managed to hold back the second period demons in goals against for the most part, but allowing the tying goal in the middle frame to Pittsburgh in their first meeting of the week proved important in the 3-2 overtime loss, the only blemish on the Caps’ record for the week. 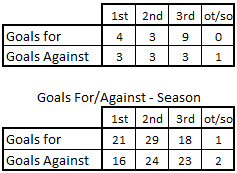 Comparing year-over-year numbers at this stage of the season is comparing those of a streaking team (last year’s 14-2-4 team though 20 games) with a team that is grinding out wins despite absences and getting to a comfort level under a new coach’s systems and philosophies.  This accounts for the Caps of last year having far and away the better numbers at this stage of the season than this year’s version.  Even where this year’s Caps are better (fewer shorthanded situations faced), they give the advantage back (lower penalty kill rate). 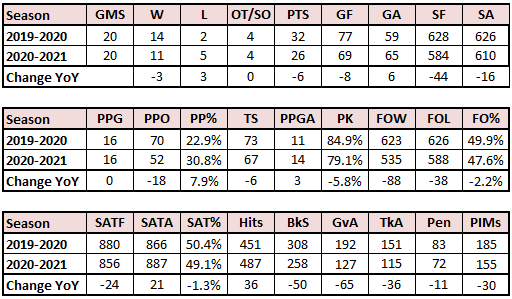 The Caps did what they had to do in Week 7 – put some distance between themselves and teams beneath them in the standings.  The bonus is that they ended the week two points clear of the team closest their rear view mirror in the standings, the Boston Bruins.  A good thing, too, for the Caps open Week 8 with a pair of games against the Bruins in Boston.