And now...yet another word about Mike Green 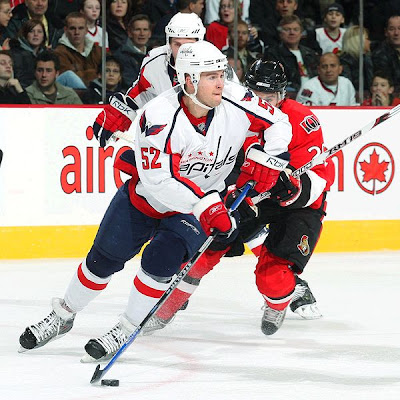 Much is being made of Mike Green lately, and with good reason. He is riding a six-game goal-scoring streak. He leads all NHL defensemen in total scoring. He’s fourth in plus-minus. J.P. takes a look at Green’s Norris credentials over at Japers' Rink. James Mirtle asks, “Is Green the NHL’s best defenseman?” What’s unanswered is whether Green can keep this up.

Well, if there is one thing that has characterized Green’s young career so far, it is explosive improvement (we like that term). Two years ago in his first full NHL season, Green played in 70 games, finishing 2-10-12, -10. He had a rather brutal end to the season though (as did the rest of the Capitals), going 0-4-4, -11 in 22 games after the end of January.

OK, let’s move on to last season. His season-long numbers improved dramatically – 18-38-56, +6. The improvement over the previous season (16-28-34, +16) would have made for a nice season in itself. But his improvement as a player might have been most meaningful in those post-January games. In his first 52 games last year, Green was 14-18-32, -5. What he had that he didn’t have in 2006-2007 was a big finish… but not in the goal-scoring sort of way. In his last 30 games last year from February 1st forward, Green was 4-20-24, +11. If he wasn’t getting the goals he might have been getting to earn the nickname “Game Over” Green, he was getting it done in other ways. And, two of those four goals in the last 30 games were game-winners (equaling his total in the first 52 games).

Looking at this graphically… 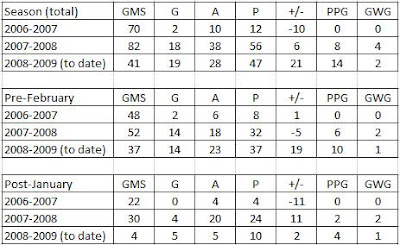 His pre-February numbers this season equaled or surpassed last year’s in every category, except game-winners, despite playing in 15 fewer games. He has already surpassed the number of post-January goals he had last year in the post-January phase of the season. One couldn’t predict (at least not while sober) that Green will average better than a goal a game and better than the two points per game pace he’s been on in the four games of February, but here is perhaps the number that serves as a good indicator that he won’t slow down much, either… two.

Green has not gone more than two games this season without recording a point. He’s had four pairs of consecutive scoreless games this year. On the other hand, he’s registered a point in 27 of 41 games played this season and 11 of his last 12 games.

While there are no certainties in such things, the arc of improvement in Green’s young career thus far suggests that he should be a prolific point producer from the blue line through the rest of the season. Is that enough to get him serious Norris consideration? Probably, given that in the last ten seasons no Norris winner has had fewer than ten goals or 50 points in his Norris-winning season.
Posted by The Peerless at 10:35 PM 2 comments: 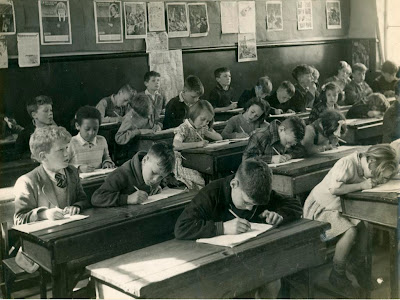 Time for a history lesson, kids...
Last year, the Capitals finished the season in a big way. Fans remember them winning 11 of their last 12 games to finish at the top of the Southeast Division. But what fans might not remember as much was that from February 1st to the end of the year, the Caps were 19-8-3 for 41 points in the standings. It was the sixth time in franchise history that the Caps earned 40 or more points from February 1st forward.

However, the standard for comparison might be the 1983-1984 team. That club went 21-6-1 for 43 points (1.54 points earned-per-game, the most of any Caps team in the post-January portion of the season). There are some things about that team worth noting…

- Only once did the 1983-1984 team endure a losing streak after January 31st. That’s right, only once did they lose consecutive games, a three game losing streak from February 19-25 (all road games, all against Campbell – “Western” – Conference teams… some things don’t change).

- Keep in mind, this was the 1980’s, a time characterized by a lot of goal scoring. The Caps allowed more than three goals in a game only four times in the last 28 games after January 31st. They lost them all.

- Oh, and the Caps were 4-0 against the Penguins after January 31st (6-1-0 for the year), outscoring them 24-6 in the four games.
That 1983-1984 team was the first of four teams in Capitals history to record more than 100 standings points (48-27-5, 101 points). If there was one word to describe it, it would be “balanced.” 13 players had 10 or more goals, seven had at least 20 (including a current Caps announcer). 19 players had ten or more points, six had at least 50 (including that guy again). 15 different players had game-winning goals. In a more subtle expression of the team’s balance, if you look at the top-ten scorers for that team, only one registered more goals than assists (Bobby Gould, and he was the tenth leading scorer on that club). They spread the puck around, and this was a team with both Mike Gartner and Bobby Carpenter, two excellent goal scorers in their own right.

The Caps are 3-1-0 to start their post-January sprint to the end of the regular season. It’s far too soon to gauge whether this club has the finishing kick to propel it forward in the standings, but if you’re looking for a standard against which to measure this team, the 1983-1984 team looks to be the Capitals team to have set the bar.
We just hope they advance farther in the playoffs than that club did...