(click pic for larger image)
Marcus Johansson had by any measure a respectable rookie season for the Washington Capitals in 2010-2011. Among rookie forwards he was…

Why then did this past season feel like a step back?

Part of it was this – Johansson was on ice for 40 goals against in 69 games in 2010-2011, but he was on ice for 62 goals against this past season. When you consider that the quality of competition he faced was not appreciably better than that which he faced in 2010-2011 (ranked sixth on the club this season, seventh last; numbers from behindthenet.ca), that is quite a deterioration in effectiveness in the defensive end of the ice.

What is more, Johansson faded as the season wore on. Looking at his tens, his scoring was reasonably consistent, generally between six and eight points in his ten-game segments, including 12 points in his first 20 games, 15 in his last 22 contests. But his plus-minus fell through the floor in his last three segments (minus-8 in 32 games). Consider than he had more than a third of his season total of goals in his first ten-game segment (five out of 14), playing almost exclusively as a top-six forward, and his season does not look very impressive over the 80 games in which he played.

Part of the problem, as it were, might have been his readiness to assume more responsibility. When Nicklas Backstrom went out with an injury and missed 40 games, Johansson’s ice time ramped up. Johansson played in 39 of those 40 games and averaged a bit over 18 minutes. However, his production did not improve. He was 7-15-22, minus-4 in those 39 games, while he was 7-17-24, minus-1 in his other 41 games in which he averaged just under 16 minutes a game.

Among all NHL forwards playing in more than half of their team’s games, only ten had fewer penalty minutes than Johansson (eight). He had the eighth fewest penalty minutes per 60 minutes among that group of forwards. He was charged with only one minor penalty in his last 66 games of the season.

Then there were faceoffs. Only 23 times in 80 games did Johansson finish with a better-than-50 percent winning percentage on draws. Even though he improved in this statistic over his rookie season (from 40.5 to 43.2 percent), he finished 88th of 89 qualifiers in faceoff winning percentage.  Here is how his numbers compare from last year to this year: 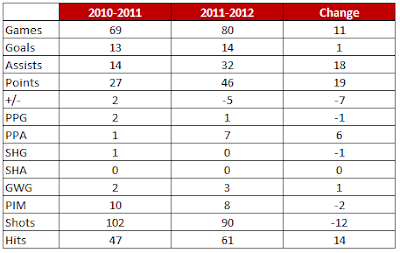 Odd Johansson Fact… Johansson had three game-winning goals in the first six games in which he played this season. He had none over his last 74 games.

Game to Remember… October 20, 2011. Marcus Johansson spent opening night in an unexpected place – the press box as a healthy scratch. He made his season debut in Game 2 against the Tampa Bay Lightning and made up for lost time. After the Lightning opened the scoring just 2:22 into the contest, Johansson got the Caps even on a play that started with Karl Alzner collecting a loose puck in the neutral zone and feeding Johansson as he was coming out of the Tampa Bay end. Johansson circled back and skated back into the Lightning end where he wristed a shot from the top of the left-wing circle. The shot went wide and caromed back where goalie Dwayne Roloson tried to cover it with his glove. He was slow to do so, though, and Johansson poked it free. With Roloson now on his knees and out of the play, Johansson took the puck, circled the net and tucked the puck in to knot things at one goal apiece. He would add an assist on a goal by Troy Brouwer and finish the night with nine shot attempts (four on goal), two hits, and a takeaway in earning the game’s second star in the 6-5 Gimmick win.

Game to Forget… March 23, 2012. The Caps had lost three of four games going into their contest with the Winnipeg Jets at Verizon Center and were just one point ahead of the Buffalo Sabres for eighth-place and the last playoff spot in the Eastern Conference. Things looked good for the Caps early on as they raced out to a 3-0 lead not 26 minutes into the contest. But the Jets came back with a goal at 7:01 of the second period and another 71 seconds later – Johansson being on ice for both scores. The Jets tied the game with 3:45 left in regulation then won it 2:37 into overtime on a goal by Tim Stapleton, again with Johansson on ice. The last goal was especially frustrating to watch as Dustin Byfuglien first manhandled Johansson to get to a loose puck, then slid the puck through Johansson’s legs to Stapleton for the game-winning shot. Johansson was on ice for three goals against, had no shot attempts in 12:37 of ice time, including 1:58 of power play ice time.

Post Season… For Johansson the post-season was a little like his regular season. He was 1-2-3 in his first five games, then did not record a point in any of his last nine contests. His shooting all but dried up in the second round, recording only seven shots on goal in seven games after putting 15 on net in the opening round against Boston. He finished with the same number of points (three) as Mike Knuble despite getting more than twice as much ice time (19:35 per game to 9:07). His 4.5 percent shooting percentage tied Matt Hendricks for second lowest among Capital forwards playing in at least ten post-season games. At the other end, the 13 goals against for which he was on ice was the most of any Capital forward.

In the end… if the term “sophomore jinx” applies to anyone, it applies to Marcus Johansson. Actually, it was not so much a “jinx” as his just not playing very well for long stretches of the season, particularly late. His scoring was up over his rookie season, but in every other aspect of the game worth noting his performance dropped off. Perhaps most curiously, the defensive responsibility he displayed as a rookie disappeared often this season. He looked lost and/or physically overwhelmed often.

With Nicklas Backstrom missing almost half the season to injury, Johansson had an opportunity to step up into his countryman’s place and show that he could shoulder top-line centerman minutes. That might have been a bit too big a step for Johansson to take. But he had the opportunity to take the second-line center position for his own, and based on his rookie season numbers it was not a reach to think he could do this. But his performance was disappointing in aspects other than his scoring. The silver lining is that it is the sort of experience from which he can perhaps see clearly what it is he will need to work on to grab that second-line center position more firmly next season.