"Happiness is brief. It will not stay. God batters at its sails."
-- Euripides

But as much as the goals, it was the missed time – again – due to “lower body injury” issues. Green missed 13 games this season to those issues, likely an extension of the groin injury issues that have been the primary reason for his missing 55 of the last 116 regular season games played by the Washington Capitals.

Part of Green’s problem is that he appears to be the sort of offensive defenseman who flourishes with a dependable defensive anchor.  In 2011-2012 most of his 5-on-5 time was spent with Roman Hamrlik (53 percent of his 5-on-5 ice time).  Another 27 percent of his ice time was spent with Jeff Schultz, a partner with whom he did well in the past, but a player who struggled in the ice time that he received in 2011-2012.

In 2013, 78 percent of Green’s 5-on-5 ice time was spent with Karl Alzner, the epitome of a stay-at-home defenseman.  It did not necessarily lead to a renaissance for Green at 5-on-5, but it was a substantial improvement over his 2011-2012 output. 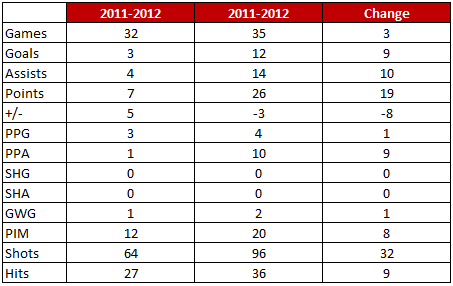 Odd Green Stat… In his last 15 games of the regular season Green was 9-9-18, yet he was still minus-5.  Part of that is the fact that Green was 4-7-11 on the power play in those games.  On the other hand, he was on ice for 14 of the 26 even strength goals scored against Washington in those games.

Game to Remember… April 27th vs. Boston.  Mike Green had not recorded a three-point game since October 22, 2011, in a 7-1 win over the Detroit Red Wings, a span of 59 games.  But on the last day of the regular season Green had a hand in all three goals in a 3-2 overtime win over the Boston Bruins.  With Boston holding a 2-0 lead in the third period Green got the Caps on the board with a power play goal.  Less than two minutes later he tied the contest when he started and then finished a play, skating out from behind his own net to start up ice, finding Mike Ribeiro with a long lead pass, then taking the return from Ribeiro to one-time the puck past gowlie Tuukka Rask.  Green then helped ice the game in overtime when, on a power play (of course), he fired a shot that handcuffed Rask.  Eric Fehr swooped in to backhand the puck past Rask for the win.

Game to Forget… April 18th vs. Ottawa.  The Caps went into Ottawa on April 18th riding an eight-game winning streak.  It would not reach nine.  Ottawa scored just 75 seconds into the game, Green getting a good view of Kyle Turris’ tally.  He got another good view of an Ottawa goal when Braden Holtby passed the puck right onto the stick of Cory Conacher who wasted no time converting.  Then he could only stand and watch as Turris scored an empty net goal with 27 seconds left.  Add to that a tripping penalty he took, and it was more a fishing trip – fishing pucks out of the Caps’ net – than it was a hockey game for Green.  He finished a season-worst minus-3, although he was more bystander than actively at fault for any of the three goals for the Senators.

Post Season… Mike Green’s post season was a microcosm of his – and the Caps’ – season.  In Game 1-4 he was 2-2-4, plus-3, and part of a ten-goal output.  Certainly not bad against a goalie with the stature of Henrik Lundqvist.  But in Games 5-7 Green was 0-0-0, minus-3 (all of that minus-3 coming in the disaster that was Game 7), part of a meager two-goal output for the team, both goals coming in Game 5, the Caps’ last win of the season.  And this illustrates a disturbing trend.  In the last five seven-game series in which the Caps have played, Green has played all 15 of the Games 5-7.  In those games he is 1-2-3, minus-5.  If he is the catalyst for much of what the Caps do offensively, the reaction has lacked a certain exothermic quality in those situations.

The Caps are a better team with Mike Green in the lineup than they are in his absence.  Their power play hums, they pose a more consistent threat offensively.  He remains one of the best skaters, puck carriers, and offensive defensemen in the league (when he is healthy).  But the flip side of that is that when he is not on top of his game, the Caps sputter.  And this has become a bit of an issue late in seven-game series.  It was the case this spring when Green – and the Caps – went utterly silent in Games 6 and 7 against the Rangers.

Green is not asked to be a shut-down defenseman, although he was on ice for only two of the 11 even strength goals the Rangers scored in the first six games of the series.  Green’s role is to be the spark, the quarterback, the guy who can skate out of his own end or make a calm, well placed first pass to start play in the other direction.  He is the guy who can finish from the blue line.  But he has to do that in the most urgent of situations.  And it is not happening for him any more than it is for any of his teammates.  If that does not change, things will not change.

Posted by The Peerless at 9:46 PM No comments: