Jay Beagle
Theme: “I know of no more encouraging fact than the unquestionable ability of man to elevate his life by conscious endeavor.“
-- Henry David Thoreau

(click pic for larger image)
It took Jay Beagle a little while to arrive. From Calgary in the Alberta Junior Hockey League in 2003 to the University of Alaska-Anchorage in 2005 to the Idaho Steelheads in 2007 to the Hershey Bears later that same year. He had a big year with the Calgary Royals in the AJHL in 2004-2005 (28 goals in 64 games) but otherwise gave no obvious indication in his numbers that he would be an NHL caliber player. But that first year in Hershey – 19 goals in 64 games in the 2007-2008 season. The Washington Capitals saw something. They signed him to a free agent contract in March 2008.

Beagle then started a slow climb up the ladder splitting time between Hershey and Washington in 2008-2009 (47 games in Hershey, three in Washington plus two more in the playoffs), and again in 2009-2010 (66 and seven). In 2010-2011, Beagle had a breakthrough of sorts at the age of 25. He split his time almost evenly between Hershey and Washington, getting 31 games with the big club in addition to 34 at Hershey. He was ready to take that last step and make the big club on a full-time basis.

And things fell into place for Beagle when the Caps cleared the decks on the bottom half of the forward lines after last season. Boyd Gordon moved to Phoenix, Matt Bradley to Florida. Andrew Gordon, who might have been a competitor for one of the emerging openings, went to Anaheim. The Caps would sign Jeff Halpern to add some veteran talent, but there was still an opening. Beagle jumped into it, skating on opening night on a line with Jeff Halpern and Matt Hendricks in a 4-3 overtime win over the Carolina Hurricanes. Things were looking pretty good.

Then came Game 3 of the young season in Pittsburgh. Late in the third period Beagle got tangled up with Penguin defenseman Kris Letang. Arron Asham came to Letang’s defense and engaged Beagle in fisticuffs. It did not last long. As we noted at the time…

“It really was a fight in three parts. There was the tangle of Beagle and Kris Letang that sparked the whole affair. Beagle might have been rightly called for roughing, but it wasn’t as if Beagle flattened Letang in open ice away from the play. What was it about this scrap that needed a third party to police it? Then there was the fight itself. Asham is a bruiser; he’s had 82 fights in the NHL before tonight. Beagle? A tough guy, but not a fighter. Tonight was his first NHL regular season fight. The results were entirely predictable.”

Concussion. Beagle would miss the next 31 games. When he did come back, things were different. He skated ten minutes in each of the two games in which he played before his concussion, a reflection of how coach Bruce Boudreau wanted to roll his lines. But now Dale Hunter was behind the bench, and he had other ideas about parceling out ice time. Beagle would dress for 12 of the next 20 games before he would top ten minutes again, averaging just over seven minutes a game in the process. He had one point to show for it (an assist in a 5-3 win over Boston on January 24th), but the Caps were 7-3-2 in those 12 games in which Beagle participated (they were 4-3-1 in the other eight games).

But Beagle climbed the ladder once more. He skated 11:06 in a 3-2 loss to the New York Rangers on February 12th, the start of a ten-games in eleven stretch in which he would average about ten-and-a-half minutes a game. He had no points over those games but was a plus-2 and won the majority of the faceoffs he took in five of the seven games in which he took draws. The Caps, though, were only 4-6-0 in those games.

On March 6th Beagle got the call for 27 shifts, by far the most he had taken in an NHL game (21 being his previous high in a 4-3 overtime loss to Florida on January 21, 2011). He skated 16:40 and scored a goal in a 4-3 overtime loss to Carolina. But it started a run that would extend through the end of the regular season and through the playoffs in which he graduated to being a 17-minute-a-game player. He was not contributing a lot of offense (4-0-4 in his last 17 regular season games), but he was doing the tough jobs (hits, blocked shots, faceoffs) the Caps needed done as they finished up the regular season with a 10-4-3 record over those 17 games to secure a playoff spot that had been in jeopardy. Here is how this season compares to last for Beagle… 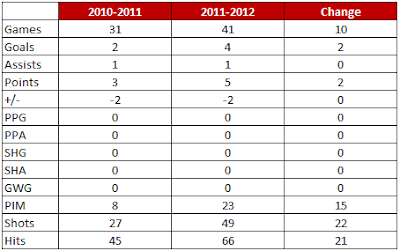 Game to Remember… April 5, 1012. The Caps were hosting the Florida Panthers in need of a win in Game 81 of the season to secure a playoff berth. It was Jay Beagle who got the Caps off on the right foot. With five and a half minutes gone in the first period Beagle circled in to take a faceoff against Stephen Weiss to the left of Panther goalie Jose Theodore. Beagle won the draw, and the puck was worked around the end wall all the way out to Karl Alzner on the left point. As this was going on, Beagle was setting up camp in the slot in front of Theodore. Alzner worked the puck back down to Troy Brouwer circling out from the corner. Brouwer fired a puck on net, but it did not get all the way through. Beagle was there to make sure it did, though, collecting the loose puck, spinning, and firing it past Theodore for the game’s first goal in a 4-2 playoff-clinching win for the Caps. Beagle also won 10 of 16 draws in the game (3-for-3 in the offensive end, 6-for-9 in the defensive end) and was named the game’s second star.

Game to Forget… let’s just say that game in Pittsburgh when Arron Asham put out his pilot light. It’s probably not much of a memory to Beagle.

Post Season… A tale of two series. Beagle was by this time a reliable 15 or more minute a game player and was not counted on to contribute a lot of offense. He didn’t. But at least in the Boston series he was active. He had one goal on 13 shots (six of them in Game 2, no goal…that came in Game 5) in the seven game series. Against the Rangers, though, he played in five of seven games (breaking his foot in the second period of Game 5 and still playing 14:59 of that game) and did not record a shot on goal for the series on 143 shifts and more than 103 minutes of ice time.

In the end… Beagle played in only 41 games, but gave evidence of being a player to count on to do the hard things that need to be done to win hockey games. Win faceoffs, battle on the wall, play good defense, be physical when need be. It is tempting that in having taken over the “Mat Bradley” spot on the roster, he was not an improvement (4-1-5, minus-2, with 66 hits and 23 blocked shots in 41 games, versus 4-7-11, minus-3, with 161 hits and 15 blocked shots in 61 games for Bradley last season). The difference is where they lie on their respective career arcs. Bradley was 32 when he put up his numbers last year and had played in over 600 NHL regular season games. Beagle was 26 and finished the season with only 82 regular season games on his resume. It suggests there is more room for improvement for Beagle, which is something he has been doing slowly, but steadily, since he started putting in the hard work to climb the ladder.