Hockey is a game. That’s why you say that teams “play” hockey. Fans spend a lot of time forgetting that simple fact. This year Caps fans were witness to the living embodiment of that sentiment, the implied idea being that hockey isn’t life.

Jose Theodore had a year that by any standard was as heart-wrenching as one could ever imagine. Having to embark on a year engaged in his profession – a very public one at that – after having endured a private tragedy that would have many retreating away from a public life had to be in a realm of difficulty that most could only dimly imagine.

That Theodore could perform at such a high level for long stretches this season speaks highly of his fortitude and resolve – 30-7-7, 2.81, .911, one shutout, a club record season winning percentage (.761), a club record for longest winning streak by a goaltender (ten games), club record for career winning percentage (.694). Much of it was the product of finishing the season going 20-0-3 (another club record – consecutive games in which a standing points was earned), 2.59, .922. It made for a remarkable set of ten-game segments as the season wore on… 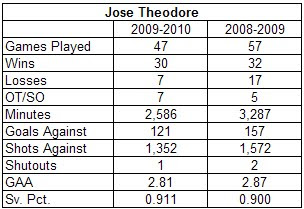 On the ice, Theodore began the season fighting the prospect of losing his number one goaltender position to Semyon Varlamov. It was an extremely, if not altogether surprisingly, uneven start. Theodore got things off on the right foot with a 19-save performance on opening night against the Boston Bruins. In fact, he would allow two or fewer goals in seven of his 14 appearances in the Caps’s first 20 games. But he also allowed four or more in five of those appearances, which led to a shaky 5-3-4, 3.24, .893 record. Giving up five unanswered goals in the last 41 minutes of a 5-2 loss to the New Jersey Devils appeared to be the last straw that would crack Theodore’s resolve. He left the club temporarily for personal reasons.

It might have been the passing of the responsibility as number one netminder to Semyon Varlamov. In fact, Varlamov would appear in seven of the next ten games, going 5-0-2, 1.67, .940. But Varlamov would go on the shelf with a groin injury, opening the door for Theodore to return. Once more he was a bit shaky to start, going 2-3-0, 3.01, .875 in his five December appearances.

But with the new year came an entirely new Theodore, and he rocketed through the remaining schedule. He did not lose a game in regulation in which he started in the 2010 portion of the season (his only loss in regulation coming in relief of Michal Neuvirth in 7-4 loss to Tampa Bay on January 12th).

If anything, Theodore was slightly better in his performance against playoff teams than he was against the league overall. He finished 14-3-4, 2.68, .916 against the 12 teams he faced that would make the playoffs.

There were 34 goaltenders who played in at least half of their team’s games. Of that group, Theodore finished 26th in goals-against average and 21st in save percentage. No number one goaltender on a playoff team playing in at least half of their team’s games had a higher goals-against average than did Theodore, and only two goaltenders on teams making the playoffs (Brian Elliott of Ottawa and Marc-Andre Fleury of Pittsburgh) had a lower save percentage (not counting Cristobal Huet of Chicago, who did not get the call to take the ice for the playoffs).  But he won, and that is the bottom line.

Which brings us to the playoffs. For the second consecutive year, Theodore’s stay between the pipes was short. In Game 1 of the first round series against Montreal, Theodore surrendered the game’s first goal, then could not hold a lead when the Caps came back with a pair of goals, and finally gave up the game-winning goal in overtime in a 3-2 loss.

In Game 2, Montreal scored on its first shot of the game – a goal by Brian Gionta at the 1:00 mark. The Canadiens were held without a shot for almost seven minutes after the score, but struck again when they finally did get a puck to the net, a goal by Andrei Kostitsyn at the 7:58 mark. It would be the end of Theodore’s night and Theodore’s season, giving way to Semyon Varlamov for the remainder of the series.

It was an unfortunate end to a difficult season for Theodore. In two years in Washington he would set those records in the regular season noted above, but as a playoff goaltender would finish 0-2-0, 3.70, .849 in four appearances. For a team whose performance is now to be measured by what it does in April, May and June – not January, February, and March – it raises doubts about his renewal as a member of the Caps as his contract expires.

Still, one cannot help but respect the season he did have in winning 30 games (tied for 13th in wins, despite appearing in only 47 games) after the difficult summer he and his family had to endure. In addition to his performance on the ice, he made contributions to the community through his “Saves for Kids” fundraising program for the Neonatal Intensive Care Unit at Children’s National Medical Center. His nomination for both the Masterton Trophy, for the NHL player who "best exemplifies the qualities of perseverance, sportsmanship and dedication to hockey," and for the King Clancy Trophy, for the NHL player who “best exemplifies leadership qualities on and off the ice and has made a noteworthy humanitarian contribution in his community,” is very much deserved.

Grade: B
Posted by The Peerless at 6:10 AM No comments: