Every Draft a Snowflake

Every draft is like a snowflake, each different and special in its own way. And that tempers our remarks here, which address a component of the Caps governing philosophy concerning personnel. The draft is an important, if not the most important, part of stocking and re-stocking talent on the parent roster. It is the engine that will make them a perennial contender for the Stanley Cup, according to the game plan.

The flip side of that is the fact that if successful, the Caps will find themselves having their first draft pick coming in the 25-30 range every year (absent trades). It’s next to impossible to find a franchise player at that point of the draft. Finding a contributor in this range (a top-four defenseman, a top-six forward, a sturdy grinder who does all the detail things well) is a hit-or-miss proposition.

Starting with 2000, when the NHL had its first 30-team rounds in the draft, let’s look at the nine drafts that followed (we leave out 2009, since none of those players have yet to dress in an NHL game). All-in-all, 54 players were selected in those nine drafts in the 25-30 range (data from hockeydb.com): 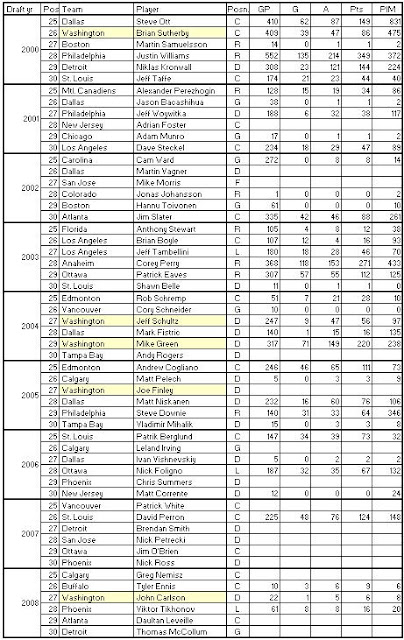 Of this group, 19 are defensemen, 16 are centers, 12 are forward/wingers, and seven are goaltenders. Looking at the centers, it is plain that finding a top-six level of player in this draft range is rare, at least in the post-2000 period. Steve Ott and Brian Sutherby have played the most games of this group (owing to their being drafted earliest in this sample), and neither is a first or second line center. In a curious twist of fate, both find themselves on the same team, Sutherby having moved from Washington to Anaheim to the Stars. Ott has done some moving of his own, having been moved out of the center spot to primarily winger responsibility. Both might be better described at this stage of their careers as grinders. In fact, “grinders” seems to be the path for centers drafted in this range – Jim Slater and David Steckel have logged more than 200 games apiece in this role.

After that, disappointment (or at least delayed success) seems to be the thing that jumps to mind here regarding centers. Adrian Foster, a 2001 draft pick of the New Jersey Devils, has never played a game in the NHL and spent the last two seasons in Europe. Rob Schremp was drafted as a player of considerable individual skill, but has never crashed through to become an NHL regular. He has bounced back and forth between the NHL and AHL, compiling 51 games of NHL experience over three different seasons. He did dress for 44 games with the Islanders last year, however. At age 23, it certainly isn’t impossible that Schremp could find himself getting top-six minutes at some point, but he’s got something of a road ahead of him to get there. Patrick White, originally drafted by Vancouver in 2007, was traded to San Jose in 2009. He just completed his junior year at the University of Minnesota, where he finished 9-8-17 (seventh in team scoring) in 39 games. He does not appear to project higher than a third liner in the NHL, which is not to say this is a bad way to make a living, only that it reinforces the idea that finding top end talent in this range is an iffy proposition.

Among the forwards/wingers, there seem to exist a few more players who have put together solid careers. No player among the 54 at all positions in this group has played more games than the 552 logged by Justin Williams. The flip side of that, however, is that he has done it with three different teams (Philadelphia, Carolina, and Los Angeles), suggesting that he is a player of talent, but not so much that he can’t be used as a trading asset (he was traded twice in his career, the primary returns being Danny Markov and Patrick O’Sullivan). Injuries have no doubt limited his contributions as well.

Then there is a Corey Perry – a 2003 draft pick of the Anaheim Ducks. Perry has carved out quite a niche for himself with the Ducks, netting 118 goals in 368 career games (averaging almost 30 a season over the past three years) and getting a reputation for being a player who is very difficult to play against.

At the other end of the spectrum are Martin Samuelsson and Jonas Johansson. Samuelsson – a 27th overall pick for the Bruins in 2000 – played only 14 games in the NHL, none since 2004. After the 2004-2005 season, which he spent with the Providence Bruins, he returned to Europe to play in Sweden, his career ending in 2008. Johansson – a 28th overall pick of the Avalanche in 2002 – played only one game in the NHL, that coming with Washington in the 2005-2006 season. His NHL career lasted barely four minutes (in a 4-1 win over Tampa Bay on April 18, 2006), the only note on his scoresheet being an interference penalty he took. After spending the 2006-2007 season in the AHL (with Hershey and Grand Rapids) he signed with HV71 Jonkoping in Sweden.

By the same token, there are some disappointments here and others you have to start to wonder about. Martin Vagner was drafted 26th overall by Dallas in 2002 and never played a game of professional hockey in North America. After being drafted by the Stars, he played another three seasons in the QMJHL (with three different teams, it might be noted), during which re-entered the NHL draft in 2004 (selected by Carolina), then went to Europe to play in the Czech league. He played for three different teams in three years there as well. There is probably something in that.

Of more recent vintage is Andy Rogers, a 30th overall pick of the Lightning in 2004. He has built quite an AHL resume since being drafted – 119 games with three different teams. But he was released from his contract with the Toronto Marlies in December 2009 and signed with the Victoria Salmon Kings of the ECHL in January 2010. He has yet to appear in an NHL game and does not appear close to doing so. A year later, the Caps would draft Joe Finley as a big, ornery, shutdown defenseman. But changes to the game since the lockout have made defensemen with the dimensions (6’7", 245 pounds) and style of Finley something of an endangered species. Finley has struggled to make progress up the organizational ladder, having played only a handful of games as a pro since his completing his amateur career at the University of North Dakota. The Capitals have almost admitted as much, trying to convert Finley to a forward in training camp this past season. His career hit another road block after he sustained a hand injury last fall that cut short his season with South Carolina in the ECHL. A 27th overall pick in 2005, he probably doesn’t crack the top half-dozen defenseman prospects in the Caps’ system, the likelihood of his becoming an NHL player (certainly a regular NHL player) now something of a longshot.

The ups and downs among defensemen, coupled with the sometimes longer lead times to get them to the NHL, makes assessing the post-2005 draftees a difficult exercise. There were seven defensemen drafted in the 25-30 range in 2006-2008. Of that group, only three have dressed in the NHL so far, none playing in more games than Washington’s John Carlson. The 20-year old also happens to be the most recent of that seven-player group to be selected and seems to have the inside track at becoming the quickest (if not the only one) to top-four status. He had a memorable year by any standard – the game-winning goal at the world juniors championship, 39 points in only 48 games at Hershey, a central role in the Caps’ playoff series against Montreal (1-3-4, plus-6 in seven games), and a Calder Cup championship in Hershey to cap the year.

The other six defensemen are a mystery. Chris Summers, Brendan Smith, Nick Petrecki, and Nick Ross have yet to appear in an NHL game. In fact, they have barely 150 games combined in the AHL (Smith is the only one yet to appear in the AHL). Given the pattern of success among defensemen drafted at 25-30 before the lockout ended, trying to predict where these youngsters will find themselves in a few years is next to impossible.

Goalies, as one might expect, are a special case unto themselves. Seven goalies were selected in the 25-30 range from 2000 through 2008, and only one of them – Cam Ward – can be considered to be an impact goalie. In fact, Ward is the only one who could even be called an “NHL goaltender” to date. Four other netminders have a total of 126 games of NHL experience among them. And there are some real disappointments in this group. None more, perhaps, than Hannu Toivonen (a 29th overall pick for Boston in 2002). Toivonen played very well in two years in Providence before getting a look in Boston in 2005-2006. He was 9-5-4, 2.63, .914 in 20 appearances with the Bruins in that audition. That would be his high point in the NHL, though. He went 9-19-6 with Boston and St. Louis after that and has not appeared in the NHL since the 2007-2008 season. He played for Peoria and Rockford in the AHL last year, going 12-15-3 in the process.

Then there are the goalies who suffer the fact that you can only have one number one goalie, and there is a line to wait on before getting a chance. Meet Cory Schneider, a 2004 pick of the Vancouver Canucks. Schneider has torn up the AHL – 84-45-5, 2.31, .919, and 12 shutouts. He has nothing to prove at that level of play, but with Roberto Luongo occupying the top spot (and signed through the 2021-2022 season), Schneider is almost a certainty never to dress as a number one goalie in Vancouver. He is not a disappointment in having played in only ten NHL games, he’s stuck.

So what does this history in the 25-30th draft pick range mean for the Caps? Well, they have Evgeni Kuznetsov at number 26 in this year’s draft. Boom or bust? We won’t know that for perhaps five years or so. The good news is that the Caps have found value in this draft range recently. Only Dallas has more picks in this range in the 2000-2008 period (six) than the Caps (five), and three of the Caps’ four picks in this range since 2004 are solid, contributing performers. Two of them could be elite at their position for years to come.

The flip side of that coin is that all four of the Caps’ picks in this range since 2004 are defensemen. While true that Mike Green and John Carlson could be elite players for the Caps, it does not follow that similar luck with a forward will ensue. The Caps, however, appear very happy with Kuznetsov falling to them at 26 in this draft. Whether he will become a more productive version of, say, Andrew Cogliano (a center picked 25th overall by Edmonton in 2005) or the next Adrian Foster is part of what makes this time of year interesting, as much to look back as to predict things to come.
Posted by The Peerless at 12:54 PM No comments: