Day 6 of Caps Training Camp 2011 is in the books, with two pre-season games having been played and two groups remaining to take the ice. As to the latter, what happened on the rink?

A lot of today was spent working on the power play. It looks as if the Caps are installing some new wrinkles, so things went slowly and methodically, with players going through the drills against only a goalie, then against defensemen, then against skaters. There was quite a bit of explanation and instruction on the part of Coach Bruce Boudreau, who ran the power play portion of the session.

The search for a right wing continues. Joel Ward was today’s contestant manning the right side on the Johansson-Ovechkin line. That makes Mike Knuble, Troy Brouwer, Joel Ward, Alexander Semin, Tony Kornheiser, and Jim Cantore, who was in town hoping for some other weather disaster to rumble by.

In the second session there was the odd sight of Troy Brouwer and Mike Knuble exchanging jersey colors (Knuble from gray to red, Brouwer the reverse), leading us to wonder if an intervention is needed concerning Bruce Boudreau’s obsession with fiddling with lines.

We also noticed that…

“Eggscuse me, Peerless, but aren’t you forgetting ze most important development.”
Why, it’s our old friend, Dr. Vynot Schootdepuck, Director of Advanced Applications at the Bettman Institute of Technology and Competitive Hockey (BITCH).


“Ja…ve couldn’t get any grrrants mit de name “Bettman” in our name.”
Anyway, what about this “important development?” 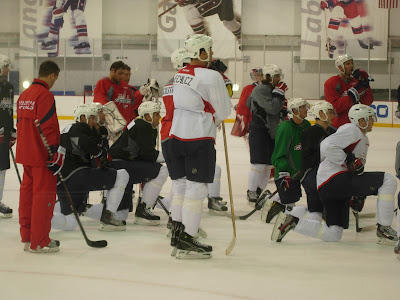 Did you come up with anything?

“One of impressive tensile strength, able to absorb ze stresses of repetitive shooting of ze puck. I alzo noticed parallel striations in the material that I zusspect only increases ze strength and durability of ze material.”
"Hey cuz…who’s the guy in the lab coat?"
“Cheerless, this is Dr. Vynot Schootdepuck, the renowned eggschperi...experimental scientist.”
"Yeah, well, I saw this stick you’re talking about."
And?


“Those starry-ayshuns Doctor Who is talkin’ about… that’s grain. The stick is made of wood. Heck, I can probably whittle one up in 20 minutes if’n you want.”
Doc? Do you want to say anything? 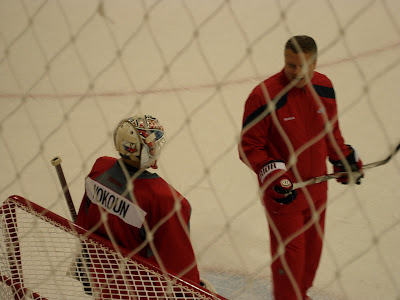 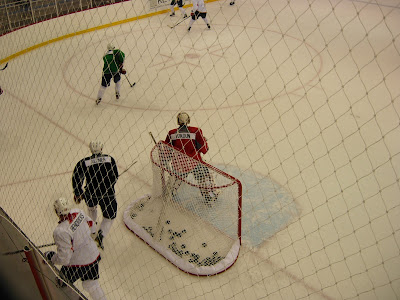 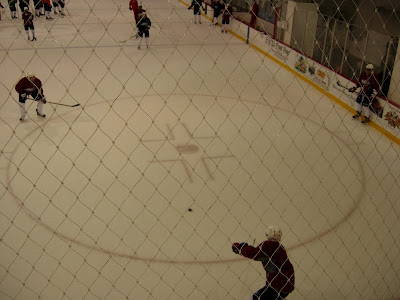 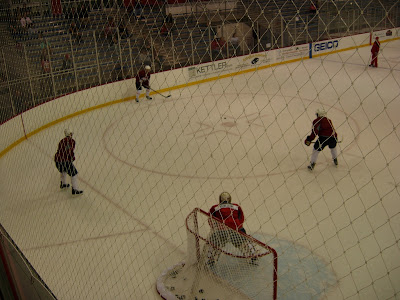 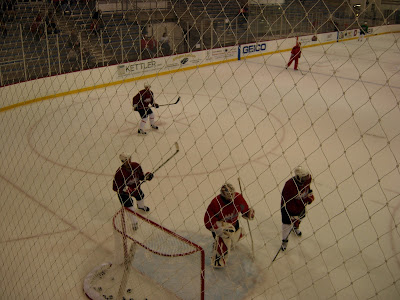 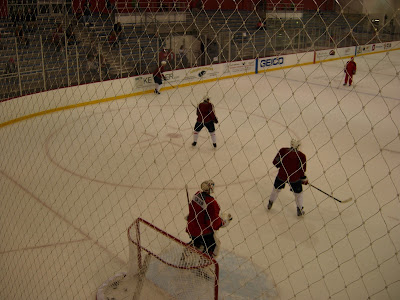 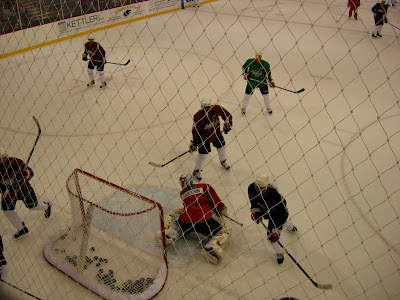 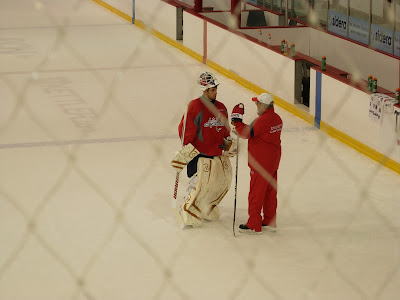 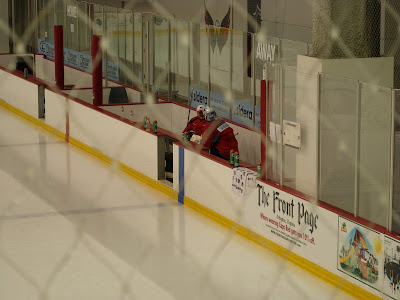 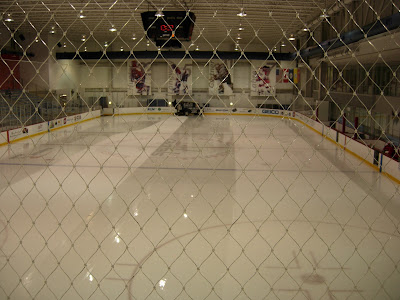 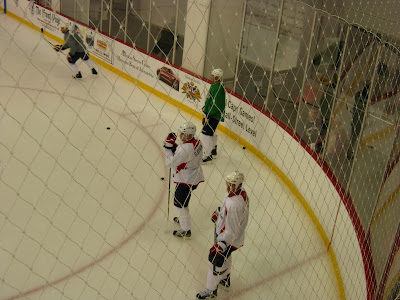 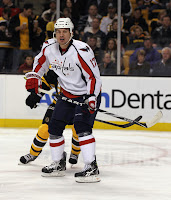 D.J. King
Theme: “All things come round to him who will but wait.”
-- Henry Wadsworth Longfellow

D.J. King logged a total of 90:57 of ice time last season. Only ten players who appeared in at least ten games logged fewer minutes, and six of them were rookies. That is the result of having dressed for only 16 games in the 2010-2011 season. King does not get much in the way of ice time, but his is perhaps the most difficult job in the sport. He is what once might have been called an “enforcer,” although in the modern (post-lockout) game, there does not seem to be much “enforcing” going on.

OK, there is that thing where he played only 16 games and 90 minutes, which isn’t much from which to make a conclusion, and the quality of competition he faced was last among forwards playing in at least ten games, but still…


“Hey cuz, the quality of teammates he had was worst on the team regardless of position, and I think that includes Slapshot.”
Thanks for pointing that out, Cheerless, but you’ll get your turn.


Fearless’ Take: You didn’t have to stop there. Here are a couple more odd facts about the season of D.J. King…

-- He had a higher percentage of offensive zone starts at 5-on-5 than every Capital forward except Marcus Johansson and Brian Willsie, who played in one game for Washington.
-- His plus-2.0 of team penalties drawn on ice versus team penalties taken on ice per 60 minutes at 5-on-5 led all Caps forwards who played in at least ten games.

Cheerless’ Take: Are you two done? He didn’t have a game with ten minutes of ice time all year; he had six with less than five minutes of ice time. In only four of his games did he skate at least ten shifts. He had one game with more than one shot on goal and had only six shots on goal for the year. He seems to be a player from a different age, a player who isn’t going to do much on the score sheet but who might have served as a peacekeeper, or at least an avenger.

The Big Question… Will King dress for more than ten games this season?

King dressed for 61 games in St. Louis in 2007-2008. Since then, it has been downhill in terms of ice time. He spent almost all of the 2008-2009 season injured, then played in just 12 games for the Blues in 2009-2010 before moving to the Caps and playing 16 games last season. Even with the departures of David Steckel, Matt Bradley, and Boyd Gordon that would have opened up spots on the fourth line, King is going to have problems finding time on ice. With the addition of Joel Ward and Jeff Halpern to the roster, there is still going to be some stability among the lines. And with the possibility of Jay Beagle jumping into the lineup, a fourth line could have Halpern, Matt Hendricks, and Beagle. Or perhaps Jason Chimera drops down to that line. If 16 games seemed like a light workload for someone the Caps traded for last summer, it seems likely he is going to get fewer games this season.

We adhere to the notion that what King does might be the most difficult job in the sport. A player like Matt Hendricks, who is a player of more varied skills who happens to fight (his 14 fights tied for 12th in the league last season), is not going to have the fighting aspect of his game spotlighted to the same degree as a D.J. King, for whom an ability to use fighting skills is the biggest reason he would be in the lineup. King’s is a job that impresses us as having at least as much pressure placed on the player to “perform” as that placed on “skill” players. It’s just him, his opponent, and 18,000 pairs of eyes on them, plus the risk of physical harm. Frankly, I don’t know how such players do it. But whether they will be doing it much longer in the NHL is something to ponder, because the pure “enforcer” of the past seems to be fading away. The 18th skater in the lineup cannot be just a “fighter” anymore, and that means that King’s chances to put up those other odd set of numbers will be infrequent this season.

If one was to tell you that among all the Caps in last season’s playoffs, that at 5-on-5 no Cap posted points with greater frequency than Marcus Johansson, would you believe it? Well, according to the folks at behindthenet.ca, Johansson’s 2.96 points/60 minutes at 5-on-5 led the team. You might think it more a commentary on the Caps’ playoff performance as a whole, but Johansson finished 15th among all players in the playoffs in that statistic.

It is an isolated number, but the point is that Johansson didn’t fade in his rookie year. In the 2010-2011 regular season Johansson missed his last game in the final game of the 2010 portion of the campaign. In the 43 games that followed to finish the year he was 10-11-21, plus-6. As it was, the 13-14-27 scoring line he posted in 69 games for the season represented the third highest point total among non-North American rookies in 2010-2011 (behind Michael Grabner and Magnus Paajarvi).

And Johansson did it with versatility, if the character of his ice time is an indicator. At 5-on-5 last season he spent 183 minutes playing alongside Alex Ovechkin. He also spent 109 minutes skating next to Matt Hendricks. He spent at least 100 minutes at 5-on-5 with seven different forwards. In terms of the nature of the lines on which he was playing, his roles seemed to be all over the place. But such is life, sometimes, for a rookie.

But a rookie he was, too. Among Caps forwards playing in at least 50 games, Johansson had the worst “relative Corsi” figure (Corsi on ice to Corsi off ice), suggesting that the Caps lacked a certain amount of offensive pressure when he was on the ice (numbers from behindthenet.ca). This is buttressed by similar numbers from stats.hockeyanalysis.com in which a look at Johansson’s Corsi numbers when paired with teammates reflect that in almost every case, the forward with whom he is paired had a higher Corsi figure when not paired with Johansson (the exceptions among forwards were Matt Hendricks, Boyd Gordon, and David Steckel).

But we are still left with that finish over the last 43 games in the 2011 portion of the season in which he had a scoring pace of 19-21-40, plus-11 per 82 games. And that is what might be tantalizing about Johansson. Is it an indicator that he could realize a big jump in Year 2 of his career?


The Big Question… Will Johansson experience the dreaded “Sophomore Slump” in Year 2?

Marcus Johansson finished tied for 12th in scoring among rookie forwards last season. Of the top dozen rookie scorers in the 2009-2010 season, five improved by at least ten points in their second season, three saw their production decline by at least ten points (of that group, T.J. Galiardi missed 47 games to a wrist injury and Tim Kennedy spent 67 games in the AHL). On average those dozen players’ production was virtually unchanged in their second year (no change in goals as a group, up one in assists). What that means for Johansson is hard to say, except that if he centers the second line regularly he should get more chances to improve his point totals in Year 2.

Johansson is one of those prospects that has progressed gradually but consistently through the ranks. Three seasons in under-18 leagues in Sweden, two in the SEL. A couple of world junior championship tournaments (the second of which he served as captain for Team Sweden), then on to Washington to start his NHL career. With that kind of preparation there is little reason to think Johansson is going to experience a step backward in his second season. In fact, his being paired with Alex Ovechkin on the top line regularly thus far in training camp suggests the possibility of a bigger role for him. Compared to other rookies last season, for example, Johansson had little power play time (he finished 42nd among rookie forwards in average power play ice time per game; even Mathieu Perreault averaged more among Caps rookies).

But no path, it seems, is uninterrupted progress. Johansson had a nice finish to the regular season, and he was tied for third in total scoring for the Caps in the playoffs with Alexander Semin. But no Cap was on the ice for more goals against than Johansson in the post season, either. He was on the ice for 11 of the 24 goals scored against the Caps last spring, including nine of the 16 the Tampa Bay Lightning scored against the Caps in their second round sweep. Johansson has a promising upside, but there is work to be done in the little things. And that is what this season is going to be about as much as his scoring.