“I was taught that the way of progress was neither swift nor easy.”
-- Marie Curie

Marie Curie might be right, but there might be exceptions.  Jakub Vrana was the 13th overall pick of the 2014 Entry Draft, and curiously enough, he is the 13th-ranked goal scorer of that class through this season.  But he might be poised to make a big leap in his production given the progress he has made in three seasons with the Caps.

Vrana appeared in 21 games two seasons ago in what was his first NHL action and posted a modest three goals and six points.  Last season he jumped to 13 goals and 27 points in 73 games and added another three goals (two of them game-winners) and eight points in the Caps’ Stanley Cup run.  This season he took another large leap, going 24-23-47, plus-20, while appearing in all 82 games.   Over those three seasons, Vrana became one of three players joining the Caps since 2005-2006 to record at least 40 goals in his first three seasons and by his age-22 season.  The others: Alex Ovechkin and Nicklas Backstrom.  Not bad company.

His contributions were quite consistent, too. Vrana recorded precisely three goals in six of his eight segments, including his last five.  He had two goals in another segment and four in the other to arrive at his 24-goal total.

If anything, his goal scoring might have suffered for an odd reason that had little to do with his skill.  He recorded a single power play goal this season, that coming late in a power play (1:43 into it) in a 5-3 win over Philadelphia on January 8th.  Vrana would seem to be a natural for being an off-wing trigger man on the power play, but the problem is that he is a left-handed shot on a power play that is “right-handed” with Alex Ovechkin, a right-handed shot, filling that role from the left wing circle where he can unleash one-timers more easily.  Vrana averaged 1:08 per game on power plays this season, seventh-highest among Capital forwards.

Despite that barrier to higher production, Vrana ended the season third on the club in goals, trailing only Ovechkin (51) and T.J. Oshie (25).  He contributed to a noteworthy balance in goal scoring, six Capitals recording between 21 and 25 goals, inclusive. 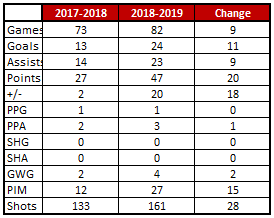 Fearless’ Take… Jakub Vrana is progressing nicely as a goal scorer in terms of production, engagement, and efficiency.  The obvious improvement is in the production itself, going from three goals in 21 games in his first season to 24 goals in 82 games this season.  But he also is being more assertive as a shooter.  In that first season he averaged 1.52 shots on goal per game.  He improved on that in each of the next two seasons – 1.82 per game last season and 1.96 shots per game this season.  But the increase in shot frequency has not diminished his efficiency.  His shooting percentage of 9.4 percent in his first season improved to 9.8 percent last year and again to 14.9 percent this season.

Cheerless’ Take… One had to like his road production this season: 15-12-27, plus-13 in 41 games, shooting at 19.0 percent.  But the flip side of that is, why couldn’t he approach these numbers on the friendly ice at Capital One Arena?  He was 9-11-20, plus-7, on home ice and shot to an 11.0 percent mark.  He was seventh on the team in home goals scored, tied for seventh in points.  The odd part of it was, three of his four game-winning goals were recorded on home ice.  If he improves in this area in the years to come while maintaining his ability to produce on the road, watch out.

When the Philadelphia Flyers visited Washington in early January, the Caps were trying to build some momentum, coming off a win against Detroit in the last game of a three-game road trip that broke a three-game losing streak (0-2-1).  Jakub Vrana was coming off a spotty month’s worth of games, going 3-1-4, plus-2, over a 13-game stretch from December 8th through that win in Detroit.  He was also riding a streak in which he had only two goals over his previous 13 home games.

The Caps took a lead early, Tom Wilson scoring just 4:21 into the game.  It was largely a product of speed and hard work by Vrana, though.  Off a faceoff in the Capitals’ zone, the puck skittered into the middle where Vrana jumped on it.  In the neutral zone he chipped the puck past two defenders, then split them to chase it down in the left wing faceoff circle.  In too deep to shoot, he centered the puck for Wilson churning down the middle, and Wilson had only to redirect the pass behind goalie Mike McKenna.

The Flyers tied the game before the teams went to the first intermission, but T.J. Oshie scored nine minutes into the second period to restore the Caps’ lead.  Two minutes after the Oshie goal, the Flyers tried to exchange the puck between teammates at the left point.  Vrana broke up the play and chased down the loose puck in the Flyers’ end, outracing Sean Couturier and breaking in alone on McKenna.  He pulled the puck to his forehand and flipped a shot over McKenna’s glove to make it 3-1, 11:22 into the period.  Four minutes later it was Vrana again, this time on a power play.  John Carlson started the scoring sequence from the right point, backing off to the middle of the ice before sending the puck to Travis Boyd at the top of the right wing circle.  Boyd relayed it deep to Vrana along the goal line extended to the left of McKenna.  Vrana tried to one-time a pass across to Alex Ovechkin closing from the other side, but the puck hit the inside of McKenna’s right pad and ricocheted into the net to make it 4-1 at the 15:55 mark.  The Flyers would get back within a goal in the third period, but the Caps got a shorthanded empty-net goal late from T.J. Oshie to seal the win, Vrana’s second goal being the game-winner.  It was his third career two-goal game and only three-point game of the 2018-2019 season.

The regular season finale for the Capitals had no meaning in terms of deciding standing or seeding for the postseason, so many regulars sat out against the Islanders.  The teams played to a scoreless tie over the first period, but the Islanders scored early in the second period to take a lead they would not relinquish.  The Caps never found the equalizer, and the Islanders scored a pair of third period goals, the latter into an empty net, for a 3-0 win.  For his part, Jakub Vrana had a spotless score sheet for his 11:31 in ice time, other than displaying a minus-2 – no shots, no shot attempts, no hits, takeaways, or blocked shots.  A thoroughly forgettable effort.

Postseason…  “Disappointing” doesn’t really cover it for Jakub Vrana in the postseason.  After posting three goals and eight points in 23 games in the 2018 postseason, he did not record a point and had only eight shots on goal in the Caps’ seven-game loss to Carolina in the first round of the 2019 playoffs (he was credited with as many hits as shots on goal).  He had no shots on goal in three of the seven games and one shot on goal in two others.  He and Chandler Stephenson were the only forwards appearing in at least four games who did not record a point for the Caps.

Looking ahead… Jakub Vrana’s entry-level contract expired with this season.  He is a restricted free agent without arbitration rights.  He is something that the Caps have in short supply and perhaps not at all in their system – a player with the potential to be a high-production pure sniper who can consistently post 30 or more goals per season.  That Vrana will be signed to a new deal is all but a betting certainty, but the decision for the Caps to pursue a “bridge” deal or a longer-term extension will be what occupies their thinking.

Jakub Vrana was making fine progress this season.  He shook off much of the inconsistency in effort and production that appeared from time to time in his first two seasons and became one of the more reliable producers for this year’s Capitals.  But then he slammed into a playoff wall in which his contributions were not to be seen.  One player cannot shoulder the blame for a seven game loss, but it could be said of him (as it could for a few other players) that if he had contributed a goal here or there earlier in the series (Game 4, a 2-1 loss, comes to mind), it might not have come down to a Game 7.  It is the bad aftertaste in what was otherwise a rather good season for a still maturing youngster, an indication that there is still work to do in his development.