Gary Bettman will present the Stanley Cup to the captain of the championship team sometime in early June. NHL teams have about 75 regular season games, and one will have 16 wins to achieve before that moment presents itself. Clearly, you can’t win the Cup in October.

But you can lose it.

A bad start in October is a reasonably good predictor to provide an answer to the question, “Can you win the Stanley Cup this year?” Not “will you,” can you?

And history provides rather compelling evidence that you “can” win the Cup only if you get off to a good start early. We looked back at the last 30 Stanley Cup winners to see how they performed in October of their Cup-winning season. And in only two of those 30 cases did the eventual Cup-winner have a sub-.500 record in the first month of play. One of those was the 1995 New Jersey Devils in a season that started late due to a labor-management impasse. Here are the results… 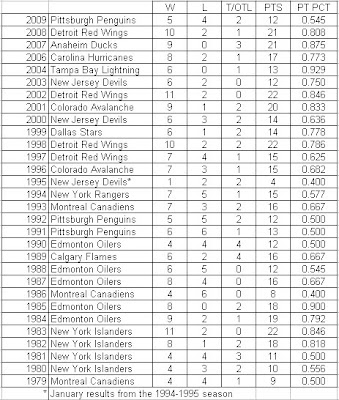 What is particularly striking about this is the recent history. Starting with the 1998 Detroit Red Wings, Cup winners have won, on average, more than 75 percent of the available standings points in October. Only one team – last year’s Pittsburgh Penguins – lost more than three games in regulation in October.

There isn’t a lot of depth to these numbers. It is simply wins and losses, which in the end are the only statistical measures that matter. And the unvarnished truth is, you had better get off to a good start if you have realistic designs on winning a Stanley Cup. You don’t have to be guns a-blazin’ out of the gate – the 2006-2007 Buffalo Sabres won their first ten games in route to a 10-0-1 October, yet lost in the conference finals in the following spring. But you can’t be a sub-.500 team except in the rarest of circumstances.

Another curiosity about the numbers, especially with respect to the last decade. In the last eight seasons, every Stanley Cup winning team has found a way to win at least one game in extra time in October. Five of the teams did it more than once, and Pittsburgh (2008-2009) and Detroit (2001-2002) did it three times.

With respect to the Capitals, they stand at .500, and they are 0-2 in extra time games thus far. The history of October is telling them, “do better.”
Posted by The Peerless at 6:36 AM No comments: