The Peerless Prognosticator is ON THE AIR!!! -- Game 44: Islanders at Capitals, January 17th

In trying to sweep their home stand and extend their winning streak to four games, the Caps will be facing their fourth straight opponent playing the second of a back-to-back set of games. The Islanders dropped a 3-1 decision to Nashville on Monday. And the Islanders do not come to Verizon Center on a hot streak. In their last six games they are 2-4-0, and they have struggled to find any consistency at either end of the ice, having been outscored in those games, 18-15. Only one of the six decisions was of the one-goal variety. How they compare to the Capitals, numbers-wise, looks like this: 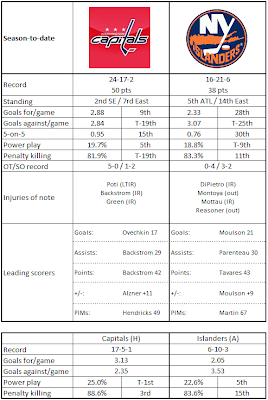 (click pic for larger image)
It is a profile that seems to suggest that the Islanders will find themselves at season-end once more in fifth place in the Atlantic Division. It they end the season that way, it would be the fifth consecutive season they finished last in their division.

2. In that 7-9-0 record over their last 16 games, three of the wins have come in the Gimmick, all on the road. The other four wins have come at home.

3. Shots do not seem to matter in games played by the Islanders. New York is 26th in the league in games they outshoot opponents (8-10-3), 27th in games in which they are outshot (6-10-3). They do, however, do well with a lead. The Isles are 10-0-4 when leading after one period, 10-1-3 when leading after two. But note that they have only held leads 14 times at the first or second intermission in 43 games.

4. What happened to Josh Bailey? When he scored 16 goals in his second season in the NHL in 2009-2010, he might have been thought of as one of a group of young Islanders who could restore the club to competitiveness. He has only 11 goals in 70 games last season, and he finds himself with only three so far this season in 43 games, none in his last 15 contests and only two assists, despite getting more than 15 minutes of ice time a night on average in those games.

5. The Islanders have dressed five different goalies so far this season – Evgeni Nabokov, Rick DiPietro, Al Montoya, Kevin Poulin, and Anders Nilsson. DiPietro might miss the rest of the season to sports hernia surgery. If so, it will mean he will have dressed for a total of 47 games over the last four seasons. Al Montoya has missed a month to a concussion. They Islanders turned to Kevin Poulin on Monday in the 3-1 loss to Nashville.

1. The Caps stumbled out of the gate under new coach Dale Hunter, losing three of their first four games. Since then, though, they are 11-5-1. They are 7-2-0 in their last nine contests.

2. Assuming Mike Green and Jeff Schultz will be out of the lineup, only five Capitals will dress having a “plus” next to their stat line. And if Cody Eakin does not dress or is sent down, there would be four “plus’ players – Karl Alzner, Jason Chimera, Jeff Halpern, and Joel Ward.

3. As the Caps try to make it four in a row, the first wins three in the streak have come by one goal. The Caps are fifth in the league in winning percentage in one-goal decisions (12-5-2).

5. Brooks Laich has been stingy with the puck so far this season. He leads the Caps in takeaways (31) and has given away the puck only 12 times in 43 games. But for really stingy? Jeff Halpern… he has three giveaways in 42 games.

In the merry-go-round that is the Islanders’ net this season, Evgeni Nabokov has been pretty good lately. In his last eight appearances he is 5-3-0, 2.49, .907. What he has benefitted from in that run is not having to see a lot of rubber, an average of 26.8 shots per 60 minutes played. The Caps have had singular difficulty in generating shots on goal – an average of 23.7 over their last 14 games, only once getting as many as 30 shots on goal in that span. Nabokov has sparkled against the Caps with a 9-1-0, 2.18, .929 record against Washington with one shutout. The trouble, if there is one, is that he is only 2-7-0, 3.20, .896 in 10 games on the road this season.

John Carlson has had his difficulties on defense lately, having been on the ice for three of the four goals scored against Washington in this home stand (all of them against Tampa Bay). But at the other end, he hasn’t recorded a goal in 16 games and does not have a point in his last eight contests. With Mike Green out, it would be good to have him take some of the blue line scoring burden off the shoulders of Dennis Wideman. He is 0-5-5 in five career games against the Islanders.

1. Fast out of the gate. We’ve hinted at this in the last few games, but once more the Caps get a team fresh off a game the previous day. It has happened in their last three games. The Caps do have goals in the first period in two of those games, which is a good thing. They need to keep up that kind of pressure on a team playing on little rest.

2. Activate! In the three game home stand, the Caps have one point from a defenseman not named “Wideman” (Dmitry Orlov’s game winning goal against Carolina). The Caps have 18 shots on goal from defensemen in this three-game home stand, eight of them from John Carlson and five from Dennis Wideman. That leaves five shots on goal over three games from the other four defensemen. That is contributing to the low shot totals for the Caps.

In the end, the Caps have made good on their opportunities on this home stand so far, both in getting teams coming off games the day before facing the Caps and in winning those games. But they have done it by the thinnest of margins, each result being of the one-goal variety. They get one last opportunity to use this formula on this home stand before heading out on a three-game road trip. The added incentive here is that a win will allow the Caps to leap back over the Florida Panthers into first place in the Southeast Division (the Panthers taking the top spot with their earning a standings point in a Gimmick loss to Boston last night). That should be enough to make the Caps’ home stand a complete success.