The Peerless Prognosticator is ON THE AIR!!! -- Game 82: Capitals at Rangers, April 7th

Well, here we are. Game 82. It has been a long road that went by in the blink of an eye. When the Caps won their season opener back on October 8th – a 4-3 overtime win over Carolina, then won another, and another, and another, then three more in a row, Caps fans probably thought that the road would be flat and smooth and would lead right to the Stanley Cup finals in June.

Then the Caps lost, then lost again, then they won, but their star was benched for the last shift in regulation when the team was down a goal. The Caps scored a goal on that last shift and scored in overtime to win, but the storm clouds were gathering, and there were hard turns on the road ahead.

There would be an injury to their top defenseman, a fired coach, a new coach who was a club icon but who had never coached a minute of professional hockey at any level, an injury to their top center from a cheap shot, sputtering production from the superstar, and more uses of the term “unacceptable” than one could count.

Instead of clinching a playoff spot in Game 74, as they did last year, or Game 68, as they did the year before, the Caps went all the way to Game 81 before clinching a playoff spot, doing so when they defeated the Florida Panthers, 4-2, on Thursday. But even that could not happen without misfortune. Michal Neuvirth sustained a knee injury when Panther forward Marco Sturm fell on it in the second period of the contest. Neuvirth had to be helped to the locker room, and his ability to play in the near term is in considerable doubt. With number one goaltender Tomas Vokoun also on the shelf with a groin injury, the goaltending duties fall to Braden Holtby, a goalie with exactly 20 appearances in his brief NHL career.

And yet, the Caps have an opportunity today to do what they have done the last four seasons – win the Southeast Division. Unlike the past four years, they will need help from someone else on the last day of the season (Florida must lose in regulation time to Carolina in their last game of the regular season). But in January, February, or even March, Caps fans might have assumed that another division championship banner was not in the cards this season.

For the Caps, it is the New York Rangers who stand in the way of another division title. The Rangers are playing for something, too. No, not a playoff spot – they clinched that a while ago. Ditto for the Atlantic Division and Eastern Conference top spot. With a win they can claim the NHL’s Presidents Trophy as the team with the most standings points in the league. The last time the Rangers accomplished the feat, in the 1993-1994 season, they won their last Stanley Cup.

The Rangers are not coasting to the finish, either. They are 7-3-0 in their last ten games and have outscored opponents, 29-25. That difference in scoring is not as close as it appears. The Rangers gave up five of those goals to the Pittsburgh Penguins in the Blueshirts’ last game with backup goaltender Martin Biron in goal. Number one goalie Henrik Lundqvist appeared in the ten games before that and compiled a record of 7-3-0, 2.18, .912. Lundqvist has assembled a record this season that puts him on the short list of Vezina Trophy candidates for top goaltender. His 1.93 goals against average ranks third in the league, as does his .931 save percentage and 39 wins. Only two goalies have more shutouts than the eight blankings he has. What Lundqvist does not have is an especially outstanding record against the Caps. Merely “good.” In 21 career appearances he is 13-6-2, 2.72, .905, with three shutouts.

While Lundqvist has continued assembling a career resume that would seem hall of fame worthy, another Ranger is quietly, or as quietly as one can do in Manhattan, finally establishing himself as one of the most prolific goal scorers in the game. Marian Gaborik has 41 goals this season, making it three seasons in his last five in which he has topped the 40 goal mark. Since the lockout, Gaborik has scored goals at a 44-goal pace per 82 games. His problem has been staying healthy enough to hit those numbers. He missed 17 games in 2005-2006, 34 in 2006-2007, 65 games in 2008-2009, and 20 games last season. But when he takes the ice today against the Caps, he will do so for the 82nd time this season, marking the first time in his career he will have played in every game of the regular season. In 16 games against the Caps in his career he is 7-3-10, three of the goals coming on power plays. 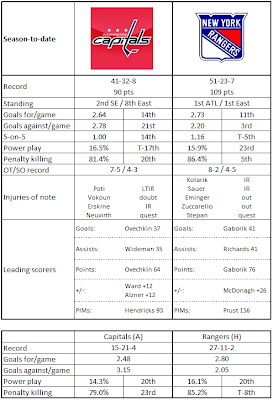 1. Part of reaching the top of the standings heap is avoiding losing streaks. The longest losing streak the Rangers have this season is three games, which they endured twice. Once to open the season (0-1-2) and another in early March (0-3-0). All six losses were on the road.

2. One thing the Rangers do very well is keep opponents from starting well. Only one team has allowed fewer goals in the first period that the 46 allowed by New York (St. Louis). The Rangers have trailed at the first intermission only 20 times in 81 games.

4. The Rangers close well, too. They are one of seven teams not to have lost a game in regulation when leading after two periods, and only four teams have allowed fewer goals in the third period.

3. Odd stat… the Caps are last in the league in road takeaways (195); they are fifth in home takeaways.

5. Winning more than 40 games does not agree with the Caps. Sure, every time they have won more than 40 games they have made the playoffs, including this season. But in the only two times they advanced to at least a conference final they won 40 games (1998, advancing to the Stanley Cup final) and 36 games (1990, advancing to the Prince of Wales Conference final).  They currently have 41 wins.

It is tough to evaluate Richards’ season for the Rangers in the context of the contract that brought him to New York. He has the second highest salary cap hit on the team (Marian Gaborik’s is higher), but he will almost certainly finish this season with fewer than 70 points (he has 66), falling for the second straight year after recording 91 points in Dallas in 2009-2010. Part of that might be that the Rangers are not an offense-centric team. Richards does have 25 goals of his own, just three short of the career high he set last season. But he has been clutch with nine game-winning goals, a career high and tied for fourth in the league. He is also a top-20 point getter on the power play (7-17-24, tied for 17th). It paints the portrait of a player who certainly has the skill to be a difference maker, but one who can be controlled if sufficient attention is paid, always an issue with the Caps. He is 8-27-35 in 49 career games against Washington.

Alex Ovechkin has not been “Alex Ovechkin” as often as Caps fans might have expected him to be when the season started. It has been a rocky season for him, what with whispers of “coach killer” hovering around him in the wake of Bruce Boudreau’s firing and a generally un-Ovechkinian level of production over the first 35 games. But since Christmas he is scoring goals at an almost 50-goal pace per 82 games. In fact, were he to score a pair in this game, that would be precisely the goal-scoring pace he will have since Christmas. He has gone silent of late after a nine-goals-in-seven-games run. He has one in his last five, that one coming in the playoff-clinching win over Florida on Thursday. He is 14-14-28 in 27 career games against the Rangers.

1. Treat it like “Game 0.” This could be the first game of what amounts to an eight-game playoff against the Rangers. It will be full of statement making, especially for the home team that wants the Caps to remember which is the Conference champion and which is the team that got in by the tape of their sticks. The Caps need to respond in kind.

2. Be a “Royal” pain. The Caps have had pretty good success against Henrik Lundqvist, even this season in which “King Henrik” has only a .894 save percentage against the Caps in two appearances. Treat him like a commoner, not like the royalty that his season stats suggest. That means getting more than 24 shots, which what the Caps averaged against him in two games this season.

3. Decisions, decisions. The Rangers are a team that puts a lot of pressure on the puck in the opponents’ end. Decisions have to be made smartly and correctly. The Rangers might also be playing with a bit of a chip on their shoulder after the Penguins’ Brooks Orpik not only was relieved of any supplemental discipline after kneeing Ranger Derek Stepan, but their coach John Tortorella was fined $20,000 for his commentary on the hit after the game. The Rangers might be a little more ornery than one might expect for a team getting ready for the big games that start next week.

In the end, much ink and many pixels are being devoted to which of the three possible teams – Boston, New Jersey, and the Rangers – would make for the best matchup for the Caps in Round 1 of the playoffs. The Caps and their fans have learned that it matters, to a point. Folks point to Montreal as being the worst possible first-round opponent in 2010, and the Caps lost that series in seven games. But too much can be made of this, too.

New Jersey might be a better matchup (the Caps would have to win the Southeast for that matchup to occur), but it isn’t as if the Caps have been uncompetitive in their recent playoff series with the Rangers, and this year’s season series is 2-1 in favor of the Rangers, the difference being a 3-2 Ranger win at Madison Square Garden on February 12th (the teams earlier split three-goal decisions). The Caps have a chance to avoid the Rangers in the first round by beating that team today. That is the important part, ending the season on a high note and as perhaps a springboard to the second season.