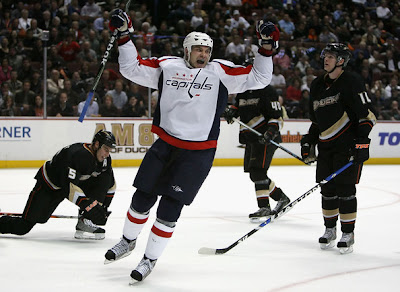 Matt Bradley is closing in on 500 regular season games played in the NHL (289 with the Caps), not bad for a fourth round (102nd overall) draft pick who signed with his last two clubs – Pittsburgh and Washington – as a free agent. His career is testimony to the benefits of persistence and hard work, night in and night out. His 2008-2009 season reflected that kind of consistent ethic…

…but not without some concerns. That hits total changing little from one ten-game segment to the next over the last sixty or so games shows his consistent willingness to be the physical forward the Caps have in short supply. His taking a total of only seven minor penalties for the season shows that his physicality is expressed within the rules…unless liberties are taken with him or teammates. His nine major penalties for fighting illustrate that characteristic.

But there is still that problem that seems to have worked its way through the bottom two lines of forwards. In 81 games, Bradley scored 11 points (5-6-11). In fact, his offense bore a striking (and disturbing) similarity to that of Boyd Gordon. He scored only one regular season goal in 42 games after netting one against Tampa Bay on New Year’s Day. He had only three points after netting two (a goal and an assist) against the Lightning on January 1st. He was 2-2-4, +5 in six games against Tampa Bay, but only 3-4-7, -6 in 75 games against everyone else. And here might be the strangest Matt Bradley number of them all…

That would be the number of points he registered against Southeast Division teams not calling themselves the “Lightning.” 18 games, no points, minus-4.

If one looks more closely at those ten games segments, there is a concern with respect to declining production. There were those four goals in the first 39 games of the year with only one in 42 games thereafter, but there was also the matter of his registering 61 of his 98 shots for the year in those first 39 games. We didn’t project him as having a big offensive year any more than we did Boyd Gordon, but we didn’t project him going into an even deeper offensive shell in the second half of the season.

Bradley is a bit tough to get a bead on in terms of his offensive potential. His first three seasons were partial-year affairs with an inconsistent San Jose team (although he did have 22 points in 54 games in his second season there). From there he went to a bad Pittsburgh team where he put up only 16 points (with a -27) in getting the most average ice time he’s had thus far in his career. He moved to Washington after one season, where he put up 19 points and 13 points (the latter in only 57 games) for a couple of rather atrocious teams. The past two seasons, playing for a playoff team, his offense hasn’t improved, although his plus-minus has improved along with the team so that he is more or less an “even” player.

What confuses the picture is his playoff performance this year. Starting with Game 5 of the opening round series against the Rangers, one in which he netted two goals (including the game winner) after being elevated to the third line, he went 2-4-6, +3 in ten games, while averaging 14:40 in ice time.

Getting more offense out of the bottom half of the forward lines – Bradley being part of this group – is important in this respect. Bradley was one of five Caps forwards playing at least 50 games who was on the ice for more even strength goals against that those scored for the Caps when he was on the ice (source: behindthenet.ca).

Bradley has shown himself to be persistent, an annoyance to other teams, a player who brings a physical edge, and a “stand up” guy (except in fights, when he seems to get knocked down a lot…we do admire his nerve, though). He has shown a tantalizing glimpse of being a bit more of an offensive threat, enough that we were wondering if the corner down by Section 103 at the Verizon Center might be renamed “The Bradley Corner.” Even on a team with as much goal scoring as the Caps, this would be welcome to take a bit of the heat off a rather top-heavy output among the “Young Guns.” He will never be confused with Wayne Gretzky, although he does share something with the hall of famer – both are winners of the William Hanley Trophy as Most Sportsmanlike Player in the Ontario Hockey League (Gretzky in 1978, Bradley in 1998). But maybe, we’ll see a little more offensive production next year.

Email ThisBlogThis!Share to TwitterShare to FacebookShare to Pinterest
Labels: Matt Bradley, the tens 2008-2009 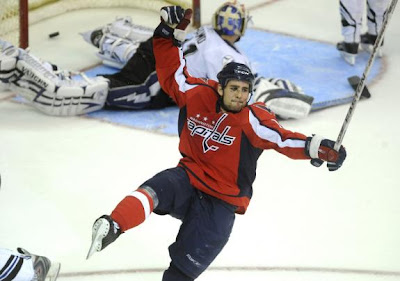 Theme: “If only they were all Tampa Bay”

Boyd Gordon scored his last regular season point on Valentine’s Day, an assist in a 5-1 win over Tampa Bay. He scored his last goal of the regular season on New Year’s Day in a 7-4 win over Tampa Bay. He had his only multi-point game of the season in that New Year's Day game against Tampa Bay. He had more points against Tampa Bay (1-2-3 in three games) than against any team he faced this year. In three full seasons he has not in any of those seasons scored more against another team than he has against Tampa Bay. In 19 career games against Tampa Bay, he is 4-6-10, +8. Against the rest of the league he is 16-40-56, -10 in 248 career games.
Unfortunately, they’re not all Tampa Bay. And this is a problem. We didn’t project Gordon to have a big offensive year, but for the second straight season, Gordon’s numbers have dropped since setting his career bests in 2006-2007 (71 games, 7-22-29, +10). And for the second straight year, he played in fewer games (63) than he did in that 2006-2007 season (71). After scoring that last point of the regular season on February 14th, Gordon went 0-0-0, -5, in 16 games before missing the last ten games of the regular season. After that last regular season goal on New Year’s Day, Gordon was 0-2-2, -5 in 27 games and twice missed at least five games to injury. He did return to play in all 14 playoff games, but he was 0-3-3, -1 (0-1-1, -3 in seven games against Pittsburgh). His ten-game segments for this season did not look all that productive…

It was not an especially memorable year for Gordon. However, he was still second best among the team’s centers in goals scored against, on ice-per-60 minutes at even strength and was virtually indistinguishable from the Red Wings’ Pavel Datsyuk – a Selke Trophy finalist – in that measure in four-on-five situations. And he did finish 13th in the NHL among players in faceoffs (minimum: 500 draws), but even here it is a bit misleading. He was fourth on the team (behind David Steckel, Sergei Fedorov, and Brooks Laich) in faceoff winning percentage in shorthanded situations (50.5 percent).

Looking at Gordon’s ten-game segments, there is nothing there that is particularly distinguishing – not surprising for a “defensive” forward, these numbers being primarily offense-oriented. But there lies the problem, too. While Gordon is not expected to be a scoring forward, he is one of the players one might be looking at during those times when folks lament the Caps’ inability to get some contribution – any contribution – from the bottom two lines of the forward squad.

Gordon is a defensive specialist. And it is worth noting that in the Pittsburgh series, the Penguins scored 27 goals. Eight of them were scored with Gordon on the ice. In only one game (Game 4) did the Penguins not score at least one goal with Gordon on the ice, and two games winners (both in overtime) were scored with Gordon on the ice. Certainly the Caps had their problems defensively in the second round series, and Gordon cannot be held singularly accountable for those goals scored while he was on the ice. Still, this is not the sort of outcome one might expect from a forward who is expected to be of the shut-down sort, especially when he is bringing little offense to the table (one assist in the seven game series against the Penguins).

Gordon finished 139th among centers in scoring in the regular season. Brian Sutherby outscored him (8-7-15 in 59 games). Jeff Halpern outscored him (7-9-16 in 52 games). Glen Metropolit outscored him (6-11-17 in 76 games). You see a theme here? If you do, you might wonder if Gordon is going to be joining that group… former Caps centers. He is a restricted free agent and wouldn’t seem likely to command more than the $725,000 he earned in 2008-2009, especially with David Steckel set to earn that amount next year having had an arguably better regular and post season than Gordon had.

Grade: C
Posted by The Peerless at 7:53 PM No comments: