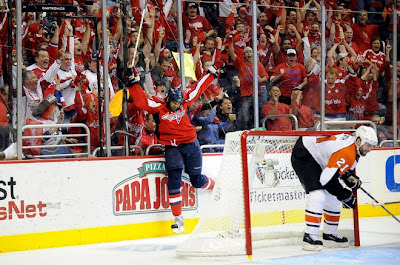 "Tonight was the loudest it's ever been for me. It's like 60 minutes non-stop. I had a broken stick, and I couldn't hear it break because it was so loud." -- Sergei Fedorov 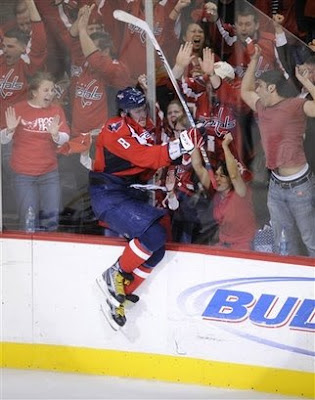 The Peerless Prognosticator is ON THE AIR!!! -- Caps vs. Flyers, Game 2

Yes, we know...it's early. But we're going to be on the road today, and we thought we get things rolling for tomorrow with an early prognosto...

The odd thing about a 5-4 game...both teams had moments they could hang their respective hats on. Both teams could say, "if we play like that..."

Well, that's the thing, isn't it? Which team can impose its will on the other. For stretches last night each team did just that. The Caps had the first half of the first and second periods, the Flyers the second half of those periods.

The Caps owned the third, and in that there is a lesson. What the Caps did in the third period was correct errors of execution they were guilty of in the first two periods -- not moving their feet in the offensive zone, lack of a forecheck -- that got them in deep trouble.

The Flyers have a different problem. Is Martin Biron the goalie to win this series for them? There is already a headline in Philadelphia asking precisely this question. Here is the argument offered by Philadelphia Inquirer columnist Phil Sheridan...

"There is a difference between being a good NHL goaltender and being the kind of goaltender who can carry a team through a playoff run. To borrow a phrase from The Godfather, you need a goalie to be a 'wartime consigliere.'

Last night, Biron was Tom Hagen. Good, but not a wartime consigliere."

Biron was good at times last night. He was never great (neither was Cristobal Huet, but he had less help in getting looks at the puck). If this comes down to a goaltending series, it is an open question whether the Flyers aren't going to come up a bit short.

The Caps can -- and did -- correct (if for one game) the things that were putting them in a hole. The Flyers might not find that so easy to do.

Best wishes and get well soon to Flyer forward Patrick Thoresen, who gave new meaning to "taking one for the team" last night, when he blocked a Mike Green drive by taking the puck to the groin. This is a hard enough way to make a living without having to risk permanent injury. Whatever jersey a player wears, one has to respect the desire to make a play that would lead a player to give himself up in that fashion. Get well soon, Patrick.

Posted by The Peerless at 4:40 AM No comments: 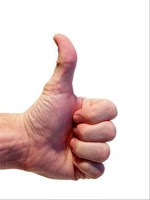 Hey, Spearchucker…one will do. And that would be the game-winner. And he had the primary assist on the game-tying goal. So, Danny, you have two goals, to Ovechkin’s one, but look who has the one-game lead.

The Caps’ 5-4 win over the Flyers tonight gives this series the look of a long one ahead, but getting the first game under one’s belt is never a bad thing. And in this first one, there were enough “firsts” to go around.

First…this is the first time – ever – that the Caps have come back from a two-goal deficit in the third period to win a playoff game.

Matt Bradley had his first career playoff points – a pair of assists – after going his first ten games (all with ) without one.

This one has to leave a persistent buzz in the Flyers' heads. They played as perfect a game as they could expect to play against Ovechkin, holding him without a shot on goal for almost 53 minutes. To his credit, Ovechkin didn’t show frustration and didn’t force things that weren’t there. He was looking for the open man when the Flyers had him boxed in, which was often – there was a lot of open ice for other Caps, and this could haunt the Flyers down the road.

And, they caught Cristobal Huet on a night when he was mortal (and wasn’t getting a lot of help in front of him), scoring four goals on 22 shots. And still they lost.

This was a game of lost opportunities for both teams. The Caps, and one would think, came out full of adrenaline. For the first eight minutes they dominated the action, tilting the ice toward the Flyers end. The Caps also got the added kick in a goal from perhaps the most unlikely of sources – Donald Brashear. The Caps lost their legs, however, after the Vaclav Prospal goal that tied the game. The Flyers dominated the rest of the first period.

The second looked a lot like the first…the Caps had jump, and they scored a goal (David Steckel). Then, the Caps had a power play, thanks to a slashing penalty on Daniel Briere. But the Caps could not convert, and Briere gathered in a puck after he stepped out of the penalty box. Briere skated in on a semi-break-away and before Tom Poti could recover in his pursuit, he snapped the puck past Huet to tie the game. At that point, the Caps stopped skating altogether, and the Flyers made them pay. The Flyers got the go-ahead goal 33 seconds later (Vaclav Prospal), and then another 3:03 later (Briere’s second).

It wasn’t looking good. At 4-2, Flyers, it looked as if the Caps were going to be playing to keep things close than to overtake the Flyers. But then there was something odd that we hope folks watching on Comcast or in the arena picked up on. David Steckel was interviewed at the second intermission and was the epitome of calm. Without a trace of panic in his voice, he noted simply that the Caps got away from their forecheck (true enough), and that they’d have to pick that up in the third period.

Did they ever. They played pretty much in the Flyer end for almost the entire third period, holding the Flyers to three shots. Meanwhile, Mike Green scored 110 seconds into the final period, pinching in on the weak side and beating a sprawling Martin Biron. Green scored again a little less than five minutes later…his first shot was blocked by Patrick Thoresen, who was left curled on the ice, unable to get back into the play. The puck came back to Green at the top of the zone, upon which he walked in a rifled the puck from the top of the right wing circle past Biron to tie the game.

The original report had Thoresen hit in the arm with the drive from Green. However, later reports had Thoresen injured in the groin, perhaps needing surgery.

The game tied, it was left to the player with an actor’s sense of timing and dramatic effect. Lasse Kukkonen was pushed behind the Flyer net by the Caps pressure (making Steckel seem very wise in retrospect). He collected himself and tried to pass the puck up the right side to Jaroslav Modry. The puck was tipped away by Ovechkin, but picked up once more by Kukkonen. Not giving up on the play, Ovechkin lifted Kukkonen’s stick, grabbed the puck, and skated across Biron’s field of vision waiting for him to commit. When he did, Ovechkin roofed the puck and sent the sea of red into a frenzy, Kukkonen off in the corner splintering his stick in the ice. The Caps then held the Flyers without a shot in the last 4:32, and Game 1 was theirs.

It was a physical game, to say the least. The teams combined for 76 hits (40 of them inflicted by ). Every Flyer but R.J. Umberger was credited with at least one, while five Caps were clean on that portion of the scoresheet. Oddly enough, Donald Brashear was not credited with a hit…but he was certainly policing the area.

For all the hype, it was a remarkably clean game – the teams split six minor penalties…although Spearchucker took two minors of his own for the Flyers with, what else, stick fouls (one slashing, one high sticking).

At this level, a team has to find a way to win when it is not having its best game, and the Caps certainly weren’t having their best game. But there isn’t any quit or any panic in this group. One gets the feeling that someone – a Brashear with a goal, a Bradley separating Flyers from their fillings, a Green making like Bobby Orr flying (sort of) across the crease after scoring a goal – is going to step up. And in the end, there was Ovechkin getting the winner off of a persistent forechecking effort.

It’s first to four, not first to one, so there is a lot of work ahead. But this one was nice, and if there is one thing a win like this – a first-of-its-kind, come-from-behind win – should demonstrate to the Caps, it is this…

We can do this.

Posted by The Peerless at 12:38 AM No comments: