Working our way from the net out in our look at the Washington Capitals draft history over the 2001-2010 period, we turn now to defensemen. 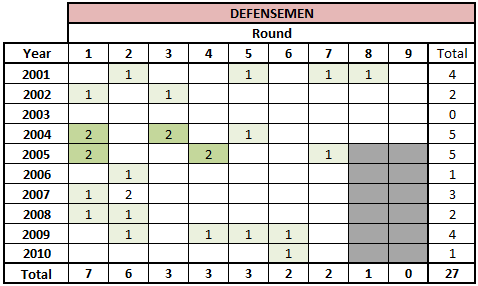 Even in those two rounds, though, there was a different experience.  The Caps selected seven defensemen in the first round over the ten-year period.  Except for two rather spectacular misses, they did rather well.  Five defensemen have combined for more than 1,800 games of NHL experience.  Three of them are still with the team – Mike Green, Karl Alzner, and John Carlson – and form the cornerstone of the defense.

Green has established himself as one of the premier offensive defensemen in the game, despite a series of injuries that have carved large chunks of games out of his resume.  Since the 2004-2005 lockout, only four defensemen have more goals from the blue line than Green, and all of them have played in at least 95 more games over that span.

Alzner continues to develop as a sound defensive defenseman.  He is also one of the most reliable, having played in each and every game of his three full seasons in the NHL.

Carlson has had episodes of poor play, but he also has shown stretches that suggest he can grow into being one of the best two-way defensemen in the league.  He shares Alzner’s reliability, also having played in each and every contest of his three full seasons in the league.

There were those two misses, though.  Sasha Pokulok was taken with the 15th overall pick in 2005.  Four years after his selection, in July 2009, here is what we wrote about him:

On the day he was selected, folks in Caps Nation could be forgiven for asking, “Sasha who?” To call Pokulok a “reach” would be classic understatement. Pokulok was the 39th-ranked North American skater in the final Central Scouting Service rankings. Pokulok would go on to play one more season at Cornell University, then he turned pro. It was a disaster. He sustained a concussion in his first game with the Hershey Bears, then missed four months before returning to action as a member of the South Carolina Stingrays in the ECHL. He played less than 20 games before suffering a second concussion. They were injuries from which he would not really recover. Even if he was in perfect health, he lost too much developmental time. Through the 2008-2009 season, Pokulok played in only 97 regular season games over three seasons in the AHL and NHL, and another 29 playoff games (all with South Carolina). The Capitals declined to retain rights to Pokulok this past June, his never having appeared in an NHL game.

If Pokulok was a curiosity in his selection, Joe Finley seemed picked for a different brand of hockey.  When he was taken with the 27th overall pick in the 2005 draft, it might have been with a much more physical brand of hockey in mind in the league as a whole.  The NHL was still in the “clutch-and-grab” era where defensemen could abuse those who would dare skate into the crease.  Unfortunately for the Caps and Finley, the league change the rules and the dimensions of the rink coming out of the 2004-2005 lockout with an eye toward opening up offense.  The new environment did not suit the larger species of defenseman (at least those not named “Chara”), and a 6’7”, 245 pounds, Finley was an endangered species before he got out of his teen years.  The Caps experimented with Finley at left wing briefly, but he would never appear in a game for the Caps.  He was invited to training camp with the Buffalo Sabres in 2011 and caught on long enough to play five games with the Sabres.  However, he was waived by Buffalo and claimed by the New York Islanders, where he played 16 games last season.

Nathan Paetsch was taken late in the second round in 2001 by the Caps.  His career with the Caps never got off the ground, contract issues resulting in his going back into the draft pool in 2003 where he was taken by the Buffalo Sabres.  He has 167 games of NHL experience with Buffalo and the Columbus Blue Jackets, but he spent two of the last three seasons in the AHL and another season in Germany.

The Caps are hoping that fortune shines brighter on Dmitry Orlov, taken with the 55th pick overall in 2009 out of Metallurg Novokuznetsk out of the Kontinental Hockey League in Russia.  Orlov’s progress was steady – two more seasons in Russia, moving to Hershey at the end of his last season in the KHL to join the Bears. Then, in something of an unexpected turn, he was called up to the Caps (a product what was the latest injury to Mike Green) and played in 60 games for the club in 2011-2012.

He might have stuck for the entire 2012-2013 season had: a) the 2012-2013 season started on time, and b) had he not been concussed in the AHL Showcase game between Hershey and the Norfolk Admirals at Verizon Center in December.  The combination of events limited him to only five games with the Caps this past season.

One could argue that the Caps got value from one other defenseman taken in the second round.  Theo Ruth was taken 46th overall in 2007.  He never played a game in the Caps’ system though.  He was traded to Columbus in 2008 for Sergei Fedorov, who would be a critical piece in the Caps' late-season playoff run in 2008 and who would spend his last full season of his career in Washington in 2008-2009.

After that, what success the Caps have had in drafting defensemen has been rare and infrequent.  Sami Lepisto, Johnny Oduya, and…well, that’s it.  Of the other 17 defensemen taken in the second round or later, those are the only two who have appeared in the NHL.  Oduya, taken in the seventh round in 2001,  has 511 games of NHL experience, none of it with the Caps.  He was released by the club in 2006.  Lepisto, a third round pick in 2004, did play in 14 games for the Caps, but was traded in 2009 for a 2010 fifth-round draft pick.  After 176 games in the NHL, he signed a contract with HC LEV Praha of the KHL in January 2013.

That leaves 15 other defensemen drafted who have neither appeared in an NHL game, nor brought back any value in trade.  What is striking about the lack of success is that there is a disturbing number who weren’t close to getting NHL ice time.  Josh Godfrey, taken high in the second round in 2007 (34th overall), has a total of 64 games at the AHL level over six seasons.  Keith Seabrook, another second round pick (52nd overall in 2006) last played in the AHL in 2011-2012.  He signed with Val Pusteria HC in September 2012, but retired from the sport two months later.  Yet another second round pick – Eric Mestery (57th overall in 2008) – did not last as long as Seabrook before retiring from the sport.  Two years after he was drafted he was out of the Caps’ system and retired in August 2010, having never played a professional game at any level.

In the end, the Caps’ success in drafting defensemen is mixed.  Their first round performance yielded value – three solid defensemen still with the club and two others with a combined 887 games of experience (Steve Eminger and Jeff Schultz).  After that, however, the Capitals do not have much to show for their efforts (the jury still being out on Patrick Wey, taken in the fourth round in 2009).  Twenty defensemen taken after the first round have a combined 79 NHL games played with the Caps.  “One-and-done” seems to apply not only to the Caps’ unfortunate playoff history but to the rounds in which they were able to draft contributing defensemen.

Posted by The Peerless at 9:34 PM No comments: