January by the numbers

It was quite a January for the Capitals… 13-2-0 for the month, franchise-tying winning streak, tops in the Eastern Conference. By the numbers, it was a spectacular month. Here is the team summary with a few notes thrown in… 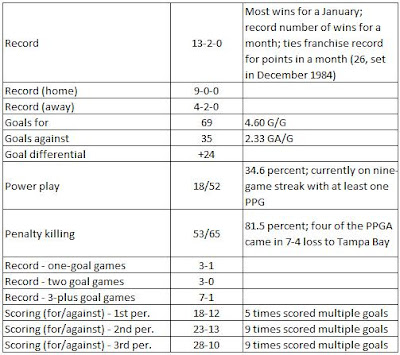 And while the “sum” was something to behold, so were the “parts”… 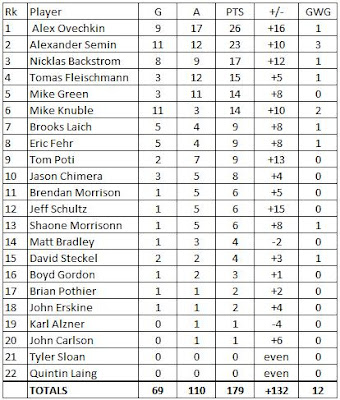 And while we’re at it, this Caps team has been quick to the “tens” – 10 points, 20 points, etc. They are in a position to obliterate the franchise record for standings points. They are on a pace for 119, and here is now they are getting there (with the record for each fastest ten-point segment -- in games it took to reach it -- for comparison)… 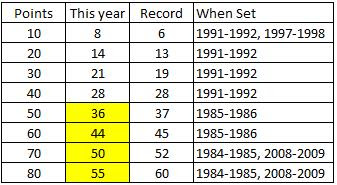 Quite a month.
Posted by The Peerless at 10:51 PM No comments:

Give the Lightning their due. They did not come in with any intention of being extras in a set play that would see the Caps march resolutely to a record-tying performance. No, the Lightning tossed everything they had at the Caps, but in the end it came down to a goalie who many so-called “experts” view as a weak link standing tall and the captain taking things into his own hands late to secure the win.

It was a victory of persistence, both for Jose Theodore (whose persistence prevented what would be the tying goal in the first period) and for Alex Ovechkin (who had 11 of his 19 shot attempts blocked by Lightning defenders).

-- In the ten game streak, this is the second time the Caps were held to three goals; they have averaged 4.7 per game in the streak.

-- It is only the third one-goal victory in the streak; the average margin of victory has been 2.6 goals.

-- Tampa Bay forwards had a total of 21 shots on goal. 11 of them (and both goals) came from the Stamkos-St. Louis-Downie line.

-- 9:33 in ice time, no fights. Zenon Konopka might have been the saddest man in the Lightning locker room after the game.

-- Ovechkin was 1-1-2 in earning the game’s first star. It was his 24th multi-point game in 47 total games played this season.

-- Maybe lost in this is that Tomas Fleischmann set a career high in points today with his pair of assists (17-22-39, eclipsing the 37 points he had last year). He is on a pace to top 60 points this season.

-- That was the 15th time in his last 16 appearances that Jose Theodore has allowed three of fewer goals. It just doesn’t have the same lyric quality, though, does it… “three-or-fewer.”

-- And for those haters who insist that the Caps cannot play defense, here is a number – 41. That was the total number of shot attempts the Lightning had this afternoon, a low number by contemporary NHL standards (the Caps had 66).

-- More for the haters… only 21 goals allowed in the ten-game streak.

-- And give a round of applause for Jose Theodore for his staying with this shot, falling backward to sweep the puck out of danger mid-way through the first period to keep the Caps up a goal... 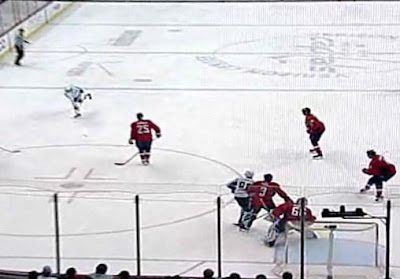 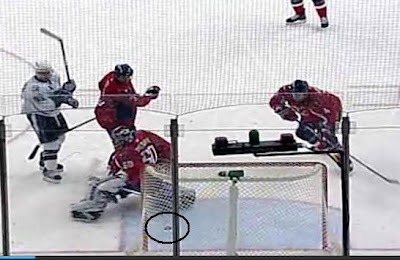 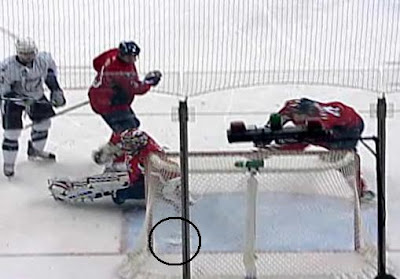 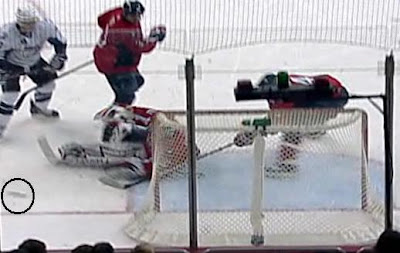 -- Another quiet plus-2 for the ol’ dubble-nikkel. Jeff Schultz had a blank score sheet in 18 minutes of ice time except for one blocked shot.

-- Steven Stamkos had a goal and an assist for the Lightning to extend his points streak to six games… but 1-for-9 on draws?

On February 18, 1984, when the Capitals defeated the Blues in St. Louis by a 4-2 score to win their tenth straight game, 15 of the 34 Caps who have dressed this season had not yet been born. “Windows” still referred to framed glass. The Macintosh was better known as an apple that you ate. Gasoline was about $1.20 a gallon. Craig Laughlin was in the midst of a 20-goal season.

It was a while ago.

But now the Caps have tied that record and look to set one for themselves on Tuesday in Boston. It will make for a stern test, but for now the Caps and their fans can enjoy this one, a fine end to a fine month.
Posted by The Peerless at 8:35 PM 6 comments: 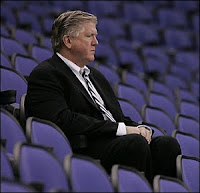 We have admit to having something of a man-crush on Burke. His public persona might be gruff, supremely self-assured, maybe a bit too far toward the neanderthal end of the spectrum when it comes to the sort of talent toward which he gravitates, and perhaps at times something of a jerk, but as a manager of an organization, he is not boring and he gets results.

And today is why the Maple Leafs entrusted the keys to the franchise to Burke.

There seems to be a flurry of activity in Toronto today as the Leafs got a head start on the 2010-2011 season. Gone to the Calgary Flames are:

First, the Leafs get younger -- Sjostrom is the oldest of the trio going to the Leafs at 26, three of the departing Leafs are older. They get arguably tougher, if only for the addition of Phaneuf (no surprise that Burke would go in that direction). They get the best player in the deal overall in Phaneuf (despite his troubles this year), and they get a good prospect in Aulie. The Leafs appear to add $317,000 in salary cap (annualized), according to James Mirtle.

The Flames are getting a couple of players who are unrestricted free agents at the end of the year (Hagman, Stajan) and an arbitration-eligible restricted free agent (White). For them, it could be a chance to change the mix (i.e., move Phaneuf) and get a cleaner slate on which to draw for next season.

And they weren't done. It is now being reported that the Leafs are sending Vesa Toskala and Jason Blake to the Anaheim Ducks for Jean-Sebastien Giguere. That is a cap saving of $2.0 million for the Leafs (annualized). And, with Giguere having one more year after this on his deal, the Leafs can have a more orderly transition to the Jonas Gustavsson era in goal, should it come to pass. For the Flames, they get the freedom that comes from this being the last year of Toskala's contract (a $4.0 million cap hit, annualized).

Toronto is probably out of the race for the playoffs this year -- making up 11 points and climbing over seven teams is a tall order with 26 games left -- but Burke has gotten a jump on his brother GM's on both the trading season and in getting his ducks (or Leafs) in a row for next year.

Guess this trumps that Penguins/Red Wings game as the story of the day, eh?