The Peerless Prognosticator is ON THE AIR!!! -- Game 16: Rangers at Capitals, February 20

The Washington Capitals look to make it three wins in a row for the first time since they ended January on a three-game winning streak when they host the New York Rangers at Capital One Arena on Saturday in a 12:30 start.

While the Caps have clawed their way back into third place in the East Division with consecutive wins this week, the Rangers are stuck in neutral, currently in seventh place in the division and six points out of a playoff spot.  If there is a bright spot, or at least something the Rangers can hang their helmets on, it is that they have broken even on the road this season (2-2-1).

What the Rangers have not done is play often on the road, skating only five of their 15 games away from Madison Square Garden.  They have two players averaging a point a game in those five road games, one a familiar name and the other something of a surprise.  It is not surprising that Artemi Panarin leads the team in road scoring so far (five points).  He has points in four of five games on the road this season. What is a bit of a surprise is that only one of those points came via a goal.  He is 1-for-18 shooting on the road so far (5.6 percent, tied for 104th among 140 forwards with at least 15 shots on goal), including an 0-for-8 shooting performance in a 3-2 Gimmick win in Philadelphia over the Flyers in the Rangers’ last road game on Thursday.

It is a far cry from last season, when Panarin posted 12 goals in his first 16 road games (on 49 shots, a 24.4 shooting percentage), including a hat trick in San Jose against the Sharks, on his way to a career high 32 goals in 69 games overall.  He did end last season with a four-game streak without a goal, so he could be said to be in a rut in this area.  Panarin is 8-10-18, plus-7, in 16 career games against Washington.

The more surprising point-per game player on the road is Colin Blackwell (2-2-4 in four road games).  He and Ryan Strome are the only Rangers with two goals in road games so far this season, and he has one point in each of the four road games in which he played.  The 27-year old Blackwell is one of those “beat the odds” players.  A seventh-round draft pick (194th overall) of the San Jose Sharks out of St. John’s Prep in 2011, Blackwell went on to a four-year career at Harvard University, where he was sidelined for much of his junior and senior seasons from a concussion.  He never played for the Sharks, moving to Buffalo on a rookie tryout and then playing for the Sabres’ AHL affiliate in Rochester.  In July 2018 he signed as a free agent with the Nashville Predators, where he played parts of two seasons, going 3-7-10, plus-6, in 33 games.  Once more a free agent after last season, he signed a two-year/$1.45 million contract with the Rangers last October.  That Blackwell is this productive, even if it is a small population of games, while averaging on 12:39 in ice time (19th of 22 skaters to dress for the Rangers this season) has to qualify as a surprise. Blackwell is 0-0-0, even, in his only appearance against the Caps to date.

This season, Johnson has been on ice for four even strength goals against, second fewest on the team among defensemen, but he has only played in six games, tied for fewest among defensemen.  He only returned to the lineup on Thursday in the Rangers’ 3-2 Gimmick win against the Flyers after a groin injury.  The odd part of his performance to date is that he has been on ice for only one goal scored by the Rangers at even strength, and he is looking for his first point of the season.  That offense might be a red flag.  Only once in five seasons preceding this one did Johnson record more than 20 points (5-18-23 for Columbus in 2016-2017) after posting his second career 40-point season in 2014-2015.  Johnson is 5-9-14, minus-4, in 31 career games against the Caps. 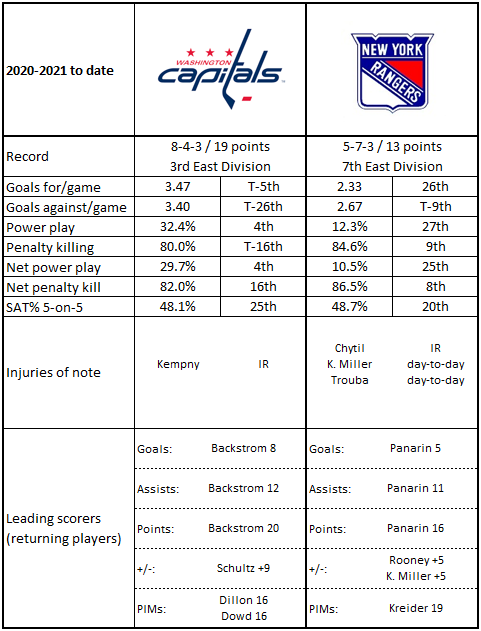 1.  The Rangers are a top-ten team in scoring defense on the road (2.60 goals per game/T-9th), but they are a bottom ten team in scoring offense on the road (2.40/22nd).  They have not scored more than three goals in any of their five road games this season, and only once did they score as many as three goals in regulation, that being in their first road game of the season, a 4-3 Gimmick loss to the Penguins in Pittsburgh on January 22nd.

3. A lack of scoring hasn’t prevented the Rangers from being balanced.  Of the 24 skaters to take the ice so far this season overall, 21 have recorded at least one point, including all 15 to dress for at least ten games.

4.  Both Ranger wins on the road have come in extra time – 3-2 in overtime over Buffalo and 3-2 in the Gimmick against Philadelphia.

5.  Since a nine-game road winning streak last season that ended with a win on February 27th, the Rangers are 3-3-2 on the road.

1.  Washington has the second-worst scoring defense on home ice in the league at 3.38 goals allowed per game.  Only Edmonton (3.70) is worse.

2.  Every Capital who has played more than five games on home ice (20 skaters) has at least one point.

It’s not juniors, is it kid? When the Rangers won the Alexis Lafreniere draft sweepstakes, it was supposed to signal a return to playoff contention for the Blueshirts after three years of absences, especially when building on having had the number two overall pick – Kaapo Kakko – in the 2019 draft.  Lafreniere was drafted after a 35-77-112, plus-41 season in 52 games with Rimouski Oceanic in the QMJHL last season after a 37-68-105, plus-52 season with Rimouski the previous year.  But while the spotlight is brighter in New York, it can be harsher, too.  Lafreniere has one point – a game-winning overtime goal in Buffalo on January 28th – in 15 games to date.

No one is pinning a “bust” label on the rookie, but his ice time is being more closely managed.  He averaged 15:21 in ice time over his first eight games, but starting with Game 9, in which he skated only 9:00 in a 3-1 win over Pittsburgh on February 1st, his ice time has been reduced to 13:35 a game over his last seven contests, and he had only 12 minutes in the Rangers’ win in Philadelphia on Thursday, and he has been spending more time on the Rangers’ third line.  In those last seven games, he has no shots on goal in three of them, and only once did he post as many as three shots.  Youngsters, even those for whom greatness is not only anticipated, but assumed, can have growing pains, and Lafreniere seems to be suffering his share of them at the moment.  Caps fans will hope the pain lasts a bit longer.  He did not have a point and was “even” in 12:38 of ice time in his first and only appearance against the Caps.

There might not be another Capital having as frustrating a start to this season as Carl Hagelin.  In 15 games, he has one goal and one assist.  On home ice, he is looking for his first goal (he has one assist) after going 0-for-14 in shooting in eight games at Capital One Arena.  Efficiency has been an issue.  Since February 23, 2019, when Hagelin played in his first game in Washington, 314 forwards have appeared in at least 75 games.  Hagelin’s 7.3 percent shooting ranks tied for 284th in that group.  When he does score, it matters – three of his 12 goals are game-winners – but they just have not come too often.  Hagelin has never been an efficient goal scorer, but he has the odd attribute of being more efficient on the road over his career (8.3 percent) than he has been at home (7.5 percent).  If there is a “glass half full” fact on which to pin one’s hopes, his best shooting percentage month of his career has been in February (10.5 percent in 105 February games played).

Even in an area of strength, there are hints of concern.  Hagelin has been on ice for seven of the ten power play goals scored against the Caps this season.  Much of that owes to the fact that he gets a lot of penalty killing ice time (3:04 per game, fourth among forwards playing in at least ten games), and he gets a lot those minutes facing opponents’ “A Team” of power play personnel, but of the 68 forwards playing in ten games and averaging at least two minutes of shorthanded ice time per game, there are only six who have been on ice for more goals against.  Hagelin is 6-6-12, plus-8, in 23 games against the Rangers.

The Rangers have not won a game in regulation since beating the Caps, 4-2, on February 4th at Capital One Arena (1-3-1, the lone win recorded in the Gimmick).  The Caps are coming out of that four-game losing streak with a couple of fine defensive and goaltending efforts.  Washington has an annoying tendency to come out sluggish in noon-ish starts, so with a 12:30 pm start on Saturday, this would be something to watch.  But given the directions in which these teams are currently heading, one would have to give the nod to the Caps…