And now, as we steam (quite literally) into the dog days of summer, and we gird our loins for what looks to be an entertaining political season, we will take a look back at Washington Capitals over the years and ask ourselves, “if so-and-so was a U.S. President, which one would he be?”  Let’s start at the beginning… 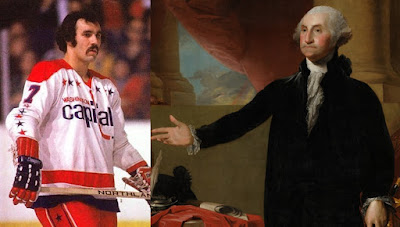 Yvon Labre, the “Father of Our Franchise.”

George Washington, first President of the United States, first (and to date, only) President to be elected unanimously (in 1789 with all 69 electoral votes).  Yvon Labre was not the first Captain of the Washington Capitals (Doug Mohns was), but he scored the first home goal in franchise history (the Los Angeles Kings were the victim; it was the only Caps goal in a 1-1 tie, the first standings point earned in club history) and was the first player in franchise history to have his number retired. 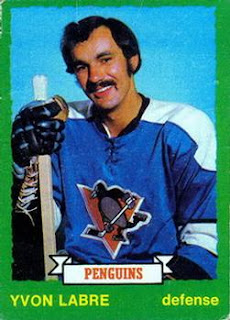 George Washington did not wear wooden teeth (his false teeth were made from other materials), but he famously had problems with his teeth (mostly a lack of them).  Yvon Labre was a hockey player…’nuff said.

George Washington had a variety of health problems over the course of his life.   Yvon Labre had knee injuries that would ultimately cut short his career.

OK, it is different, but let’s not get too serious.  After all, it is summertime.
Posted by The Peerless at 1:21 PM No comments: