In a draft class that includes John Tavares, Matt Duchene, Evander Kane, Ryan O’Reilly, Chris Kreider, Oliver Ekman-Larsson, Victor Hedman, Nazem Kadri, and others of similar ilk, you rank seventh in NHL games played, eighth in goals, fifth in assists, fifth in points, yet there are questions whispered and murmured from time to time about whether this player (who has not yet reached his 26th birthday) should be traded.

What his 2015-2016 season suggests is that a certain consistency is coming into his game.  His goals-per-game overall (0.8) was unchanged from last season.  His 5-on-5 points per game was unchanged as well (1.6).  Johansson’s overall Corsi-for of 57.8 percent was the third straight season he finished over 55 percent (although his 5-on-5 Corsi-for of 49.2 percent dipped back under 50 percent after finishing at 51.9 percent the previous season).  His on-ice 5-on-5 PDO was over 100 for the second straight year.  But here is one of the strangest nuggets of consistency in his career to date.  In five full seasons (again, not counting the abbreviated 2012-2013 season, his total Corsi events, for and against, have finished in a very tight band, between 111.7 and 114.9 events per 60 minutes (it was 112.0 this past season).

How Johansson got his points had an intriguing quality to it.  In 16 games in which he scored a goal, the Caps were 11-3-2, a nice record.  However, when he recorded an assist, the Caps had only one regulation loss (18-1-3).  Extending the personal performance notion, when he produced high shot volumes, the Caps were not especially successful, going 5-1-3 when he recorded four or more shots on goal (even though his shooting percentage in those games – 12.2 percent on five goals on 41 shots – was only marginally lower than his season shooting percentage of 12.9 percent). 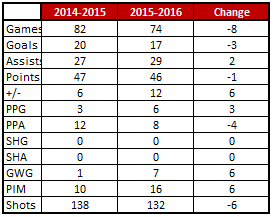 Cheerless’ Take… Let’s not throw a parade for him just yet, cuz.  Seems there is a difference between making other players better and being made better by other players.  I wonder if Johansson isn’t still too much of the latter.  For instance, among forwards he spent most of his 5-on-5 ice time with Justin Williams, and their Corsi-for when on ice together was 50.2 percent.  But Williams was at 54.6 percent when not skating with Johansson.  Next on the list was Evgeny Kuznetsov, with whom his Corsi-for was 46.2 percent.  When apart, Kuznetsov was 54.6 percent, too.  Jason Chimera…47.2 percent with Johansson, 48.1 when apart.  The difference was when he played with the big guns – Nicklas Backstrom and Alex Ovechkin.  With Backstrom and Johansson were 58.0 percent, but when Johansson was separated from Backstrom, he fell to 47.3 percent.  With Ovechkin, Johansson was at 58.5 percent, but apart, Johansson fell to 48.1 percent (numbers from stats.hockeyanalysis.com).  They made him better, but Johansson might have come up short in making other forwards better when skating with them.

The Caps were on a roll in early December riding a six-game winning streak when they were beaten by the Winnipeg Jets in overtime, 2-1, in the last game of a three-game road trip, a game in which Marcus Johansson did not play due to a lower body injury.  Returning home to Verizon Center, the task was to start a new streak, but the opponent was the Detroit Red Wings, who were on a three-game winning streak of their own.  It took the Caps less than a minute to serve notice that the streak was in jeopardy.  The play started with Marcus Johansson keeping a sliding puck from exiting the offensive zone, then feeding it to Evgeny Kuznetsov on his right.  Kuznetsov circled in and tried to stuff the puck past goalie Jimmy Howard, but it squirted to Howard’s right.  From his knees, Justin Williams poked the puck past Howard’s right pad and under his stick to make it a 1-0 game just 43 seconds into the contest.  For Williams it was his 600th NHL point, and for Marcus Johansson it was his 200th point.  Johansson assisted on both Capital goals, the other a primary assist on a power play goal by Alex Ovechkin in the third period, in what would be a 3-2 Gimmick win for Washington.

It was just another game in the middle of January.  The Caps were visiting Brooklyn to face the New York Islanders, and they had taken a 1-0 lead on a Jason Chimera goal early in the contest.  Then, with the clock ticking down toward the 11-minute mark, the Islanders’ Thomas Hickey collected a loose puck at center ice.  Hickey flipped the puck back into the Caps’ end, but after doing so, Marcus Johansson came in high and hard, leveling Hickey with a late hit.

Johansson was charge with a minor penalty for an illegal check to the head.  For his part, Hickey played on (he finished with more than 15 minutes of ice time).  That might have been the end of it, Johansson going on to record an assist in the Caps’ 4-1 win.  But it was not.  The league’s Department of Player Safety suspended Johansson for two games for the hit.  He missed the fun a couple of days later when Alex Ovechkin recorded his 500th goal in a 7-1 win over the Ottawa Senators.

It would not be fair to characterize Marcus Johansson’s postseason as bad, but it was representative of the team as a whole.  In the opening round series against the Philadelphia Flyers he was 1-5-6, plus-2, and he had a Corsi-for at 5-on-5 of 49.4 percent.  In the second round against the Pittsburgh Penguins he, like much of the forward corps outside of the first line, saw his offensive production evaporate.  In six games he was 1-0-1 (the goal coming on a power play in Game 2), minus-4, and he had a Corsi-for of 45.7 percent at 5-on-5.  It was, as it was the case for a lot of Capitals, as if it was two different postseasons entirely, not just two different series.

We are at the point of his career at which we can say that Marcus Johansson is young, but he is not inexperienced.  He will not turn 26 until the first week of October, but he will be going into the 2016-2017 season with 475 regular season and playoff games of experience.  He is tied with Dmitri Khristich for 38th place in franchise history in regular season games played (419), and his 56 playoff games played ranks 17th.

It is that body of experience that sees the “consistency” he is developing as a coin with two sides.  On one he is the dependable top-six or top-nine forward who plays productively and intelligently at both ends of the ice.  On the other side is a question, “is this the top end of his development?”  It is a question that takes on a bit more urgency with Johansson now a restricted free agent after winning a $3.75 million judgment in arbitration last off-season.  Does he have another level or more in his developmental arc to be a reliable and productive top-six or top-nine forward?  It is not the most pressing issue the Caps have, perhaps, but it will be one that bears watching after what was, for Johansson, a good, if typical year.

Photo: Patrick Smith/Getty Images North America
Posted by The Peerless at 8:00 AM No comments: