The Washington Capitals entered their contest against the New York Rangers on Wednesday having won six straight games.  The bug in the punch bowl there was that the last four of those wins were obtained from teams that did not make the playoffs in 2011-2012.  Still, the Caps were making hay while the sun shined.  In those six games the Caps averaged 3.8 goals per game, while allowing just 2.3 goals per game.  The power play was 5-for-17 (29.4 percent), while the penalty kill was a perfect 16-for-16.

The Caps would move up in weight class with Wednesday’s contest, the first of a home-and-home set against the New York Rangers.  The Rangers eliminated the Caps in seven games in last year’s Eastern Conference semifinals, and they came into this season as a leading contender to represent the East in the Stanley Cup finals.  And this would not be exactly the team that eliminated the Caps last spring, either.  Rick Nash was signed to a contract in free agency last summer and would be a hoped-for counter-weight for goal-scoring on the left side to Marian Gaborik on the right side of the Rangers top line.

It would be the Caps stiffest defensive challenge since starting their six-game winning streak against Pittsburgh on October 31st.  And the Caps were up to the challenge early, the game taking on the style the two teams played last spring – a lot of skating around to little effect on the scoreboard.  The teams were scoreless through the first half of the period, despite the Capitals enjoying a four-minute power play when Anton Stralman cut Mike Green with a high stick.  It was the Rangers, though, who tilted the ice right after the power play.  That pressure was rewarded when Rick Nash drew both Caps defensemen to his side of the ice as he skated with the puck in the left faceoff circle.  It left Brad Richards alone at the post to the left of goalie Michal Neuvirth, and Nash slid the puck across for a tap-in to give the Rangers the lead.

The goal got the Madison Square Garden crowd into the game, and it made things that much more difficult for Washington trying to get out of their own end under Ranger pressure.  Playing almost entirely in their end of the ice after the Richards goal yielded dividends when the Rangers crowded the Capital net.  Ryan Callahan notched his third goal of the season from a scrum in front of Neuvirth, and on the play Caps defenseman Dmitry Orlov tumbled into Neuvirth.  The goalie was attended to by the training staff in what looked to be an injury to his right ankle or knee.

Neuvirth remained in the game, but he was victimized barely two minutes later in the final minute of the first period when Michael Del Zotto wired a shot that Neuvirth whiffed on as he trying to glove the puck down.  The Rangers quick work in the last half of the second period gave them a 3-0 lead after 20 minutes.

Neuvirth was relieved by Braden Holtby to start the second period in his first appearance since losing to Calgary on October 27th.  Holtby did not look as if he had much rust, keeping the Rangers from adding to their advantage to open the middle period.  Holtby’s efforts turned the momentum for the Caps, and they were rewarded late in the period when Mathieu Perreault circled around the Ranger net and attempted a wrap-around to Ranger goalie Martin Biron’s left.  Biron covered the post, but the puck squirted out to Marcus Johansson between the hash marks, and Johansson snapped the puck past Biron before he could square himself to the shooter.  The Caps could not parlay that goal into any further scoring, and the teams went off after 40 minutes with the Rangers holding a 3-1 lead.

Although the Caps kept up the pressure to start the third period, any hope they had of coming back was effectively halted at the 11:19 mark when Derek Stepan redirected a Dan Girardi shot over Holtby’s blocker to put the Rangers up 4-1.

The Capitals made it closer when Dmitry Orlov scored his second goal of the season with a slap shot through a screen in front of Biron, but with just 1:42 left in the contest, there was not enough time for the Caps to mount any further comeback.  The Caps’ six-game winning streak went by the boards, 4-2.

Notes:  The loss dropped the Caps to 1-4-2 on the road… Washington successfully killed off three shorthanded situations, bringing them to 19-for-19 over their last seven games… Neuvirth is day-to-day with a lower-body injury. 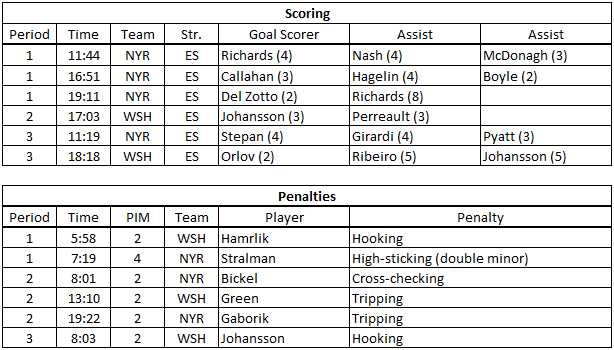 Posted by The Peerless at 8:53 PM No comments: