From the “better late than never” file, we get on with looking back at the Caps “by the tens.” First up, the defense and…

Theme: Teach us, O Lord, the disciplines of patience, for to wait is often harder than to work.
-- Peter Marshall

(click pic for a larger version)
Karl Alzner was taken with the fifth overall pick in the 2007 draft, and if it seems as if it has taken a long time for him to cement his place in the Caps lineup, it is perhaps a product of his being a fifth overall pick. Call it "high expectations."  Alzner was taken on the heels of a fine year with the Calgary Hitmen in the Western Hockey League, and he spent one more year in Calgary after being selected by the Caps. In 2008-2009 he played the majority of his games in Hershey with the AHL Bears, but he did get 30 games with the Caps as injuries hit the blue line. It was a respectable beginning for a 20 year old defenseman (1-4-5, minus-1 in those 30 games), and might have been looked at as a launching pad for the next season.

In 2009-2010, however, Alzner once more spent the majority of his time in Hershey (56 games) with 21 games spent in Washington. Fans might be forgiven for thinking that Alzner was going sideways in his development. But Alzner was putting the finishing touches on his apprenticeship. He was called upon to play in one playoff game for the Caps in 2010 – the Game 7 loss to Montreal in the opening round – and then was returned to Hershey for the Bears’ run at a Calder Cup. Alzner played in 20 post season games for the Bears as Hershey repeated as AHL champs. In the process he was 3-7-10, plus-7, including a goal in the Bears’ Cup-clinching 4-0 win over the Texas Stars. Not a bad offensive line for a defenseman primarily known for his play in his own end. Here is how he compared to the 2009-2010 season:

That would be the last game Alzner played for the Bears. He played in all 82 games for the Caps in 2010-2011, one of three Caps to play in every game. One would like to say he was consistent over the course of the season, and in a way he was. In his ten game splits he finished on the minus side of the ledger only twice (minus-five in Games 21-30, which included the first four games of the Caps’ December eight-game losing streak, and minus-2 in Games 61-70). As if to reinforce the point, Alzner was “only” minus-2 in that eight-game losing streak, and he was “only” plus-2 in a nine-game winning streak the Caps had between February 26th and March 15th.

On the other hand, he seemed to alternate productive and unproductive groups of games, offensively. No points in his first ten games of the season, three in his next ten. None, three, one, three, one, and one followed in his ten-game splits. But even there, it was only the appearance of alternating production. Those three points in his sixth ten-game split – all of them came in Game 58, a 7-6 win over the Anaheim Ducks in which 11 different Caps had points, and six different Caps (including Alzner) had multi-point games. Taking that game into consideration, Alzner’s offensive production was largely limited to the first half of the season (2-4-6 in Games 1-40; 0-3-3, not including that three-point game, in Games 41-82). But he was plus-5 in those first 40 games, plus-9 to finish the season.  Here is a comparison of his 2010-2011 numbers to those of his 2009-2010 season: 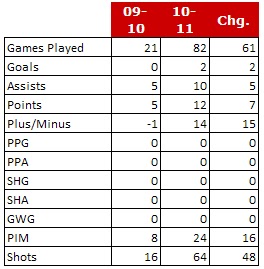 As a practical matter, his offense didn’t, well…matter. Alzner was not – and should not have been – counted on to produce a lot of offense from the blue line. He wasn’t a big hitter, either (third among Caps defensemen in hits). However, he did have his moments. He recorded 54 of his 98 hits (and 15 of his 28 multi-hit games) in the three ten-game splits corresponding to Games 21-50 on the schedule. He had only 24 hits in the last 32 games of the season, none in his last six. With respect to those Games 21-50, had he extended that performance over the course of the entire season, he would have finished with 159 hits, which would have been second on the team behind the 166 that John Erskine had. Alzner is not known as an especially physical defenseman, but it was a somewhat odd progression through the schedule.

Odd Alzner Fact… Alzner was 2-10-12 for the year, but only one of those points (an assist) was recorded in 24 games against Southeast Division opponents (he assisted on a game-winning overtime goal in a 3-2 win over Florida on March 6th).

Game to Remember… March 6, 2011. In a 7-6 win over the Anaheim Ducks, Alzner had three assists, his career best in assists and points (three) in a game. Two of the helpers came on goals that tied the game, the third on the game-winning goal with 1:47 left.

Game to Forget… February 25, 2011. Alzner was on the ice for three goals in a 6-0 loss to the New York Rangers. In addition, he was credited with no takeaways, no blocked shots, no hits in 20:42 of ice time.

Post season… If you are going to be primarily a defensive defenseman, then you can’t be the guy who was on the ice for the most goals against. In nine games and 24 total goals allowed by the Caps, Alzner was on the ice for ten of them (led the team) – five in five games against the Rangers, five in four games against the Lightning. It was Alzner’s first extended experience in an NHL playoff setting, and in that respect this spring’s performance might be chalked up to “learning.”

In the end, for all the waiting Alzner and Caps fans experienced in his getting to the NHL as a permanent fixture, he now has played in more NHL games (133) than any other defenseman in his draft class. He was one half of what became the Caps’ best example of a “shutdown” pair (with John Carlson) for much of the season. He averaged 20:00 of ice time a game, almost none of it on the power play, which meant that he spent large chunks of time in that “defensive” role. Even if his ten-game splits suggest a bit of fading late (0-2-2, even in his last two splits), Alzner had a solid year for a player who came into the season with 51 games of regular season and one game of playoff experience.

Grade: B
Posted by The Peerless at 6:24 AM No comments: