The Peerless Prognosticator is ON THE AIR!!! -- Game 56: Capitals at Jets, February 13th

The Washington Capitals embark on their longest remaining road trip of the season this week, beginning with a trip to Winnipeg to face the Jets on Tuesday.  In the Jets, the Caps might be facing the most surprising non-expansion team in the league this season.  Through Sunday’s games, the Jets had the fifth-best record in the league (32-15-9), a record that was hardly a fluke, the Jets ranked in the top-ten in a wide variety of statistical categories.

The Jets have been consistently good, not a club of binges of wins.  Their longest winning streak this season is four games (Games 16-19 in mid-November), but they have had five other winning streaks of three games.  Only once this season have the Jets had a losing streak of as many as three games (Games 28-30 in early December, when they went 0-2-1).  Only five times this year have the Jets lost consecutive games in regulation, the fifth being the situation in which they currently find themselves.

This is a club that gets balance in their high scoring volume.  Eight Jets have at least ten goals this season, led by Patrik Laine with 25. Laine, the second overall pick of the 2016 entry draft, has already established himself as a prolific goal scorer.  Only three players since the 2004-2005 lockout have appeared in at least 100 games over their first two seasons and averaged more goals per game than Laine (0.48): Alex Ovechkin (0.60), Auston Matthews (0.51), and Evgeni Malkin (0.50).  He is in the midst of a hot streak, too.  Since going seven games without a goal to end the old year and start the new, Laine has seven goals in his last 13 games, only once in that span going consecutive games without a goal.  He will be looking to avoid going consecutive games without a tally when he takes the ice against the Caps.  Laine does not have a point and is minus-3 in two career games against Washington.

While Laine at the top of the team’s goal scoring ranking is no surprise, Nikolaj Ehlers being the other Jet with more than 20 goals is a bit of an eyebrow-raiser.  But perhaps not much of one upon closer inspection.  Ehlers’ progress in his brief three-year career with the Jets has been striking for the level of improvement in goal scoring.  He had 15 goals in 72 games in his rookie campaign two seasons ago, and he almost doubled that total to 25 in 82 games last season.  With 21 goals in 56 games this season he is on a pace to top 30 goals this season.  Ehlers is more of a “bunches” scorer than Laine, his four multi-goal games (including a hat trick in a 5-2 win over the Edmonton Oilers on October 9th) leads the club.  And when he does score, the Jets do win.  Winnipeg is 11-2-2 in the 15 games in which he recorded a goal this season.  However, like Laine, Ehlers does not have a career point against the Caps, going 0-0-0, minus-2, in four career games against the Caps.

If there is one thing that can hold the Jets back this season, it might be goaltending.  Not that Connor Hellebuyck hasn’t been good; he has.  Among 43 goalies with at least 1,000 minutes of ice time this season, he is tied for second in wins (28), eighth in goals against average (2.35), and ninth in save percentage (.923).  He is tied for second in shutouts with five.  If he has an odd statistic, it is that he has as many losses in regulation (eight) as he does in extra time (eight, most in the league).  However, there are two concerns about Hellebuyck, one immediate and one looming in the future.  Of immediate concern is that in his last seven games he is 3-2-2, 2.68, .907, with one shutout.  In five of those seven games he allowed three or more goals.  A slump or a regression?  The issue looming in the distance is Hellebuyck’s postseason experience.  He has none.  Not in the NHL, not in the AHL, not in two years at University of Massachusetts-Lowell.  He does have two years participating with Team USA in the World Championships, backstopping the team to a bronze medal in 2015.  Hellebuyck is 1-1-0, 1.93, .938 in two career appearances against the Capitals. 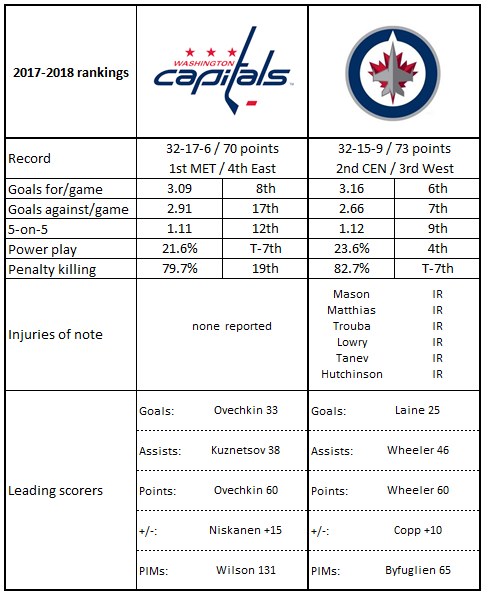 4. No team has fewer major penalties called against them this season than Winnipeg (six, tied with Vegas).

1.  The Caps have 12 “plus” players, but two of them have played in fewer than ten games: Aaron Ness (plus-2 in eight games) and Nathan Walker (plus-1 in seven games).  Another is a plus player in fewer than 25 games (Taylor Chorney, plus-8 in 23 games).

5.  The Caps have been credited with only 314 blocked shots on the road so far this season, fewest in the league and almost 50 fewer than the next team up the rankings (Carolina: 363).

The Atlanta Thrashers/Winnipeg Jets have neither a long nor a particularly outstanding history.  Nevertheless, it might surprise some to know that former Capital Mathieu Perreault ranks 15th on the all-time franchise points list (159) and is a good game away from passing Nik Antropov (161) for 14th place.  His 55 goals with the club ranks 18th all-time, one behind Ray Ferraro for 17th place, and his 104 assists ranks 13th in franchise history.  Perreault is a very efficient contributor on this year’s team, ranking fourth in goals scored (15, tied with Mark Scheifele), and his 2.98 points per 60 minutes ranks second among 23 skaters recording at least 100 minutes of ice time this season.  He has been hot of late, going 5-6-11, even, in his last 14 games.  However, when he was held without a point in the Jets’ 3-1 loss to the New York Rangers on Sunday, it marked the first time over those 14 games that he was held without a point in consecutive games.  Perreault is 2-0-2, minus-5, in six career games against Washington.

Tied for eighth in goals among defensemen, third in assists, third in points, tied for fifth in power play goals, third in power play points, tied for fourth in game-winning goals, fifth in shots on goal, sixth in average ice time, tied for ninth in takeaways, first in power play ice time per game, first in total special teams ice time per game.  His 35 assists and 44 points in 55 games are already the second highest totals in those categories of his career.  He has more points (44) than the next two Capital defensemen combined (Dmitry Orlov (20) and Matt Niskanen (17)) combined.  He is the only Capital defenseman to have recorded at least one power play goal (four) and he has all but one of the power play points scored by Caps defensemen this season (21 of 22; Orlov has the other).   He has almost as many shots on goal (165) as the next two Caps defensemen combined (Orlov (91) and Niskanen (76)).  John Carlson is having a career year.  And his contributions matter.  The Caps are 8-1-0 in games in which Carlson scored a goal, 25-5-3 in the 33 games in which he had at least one point.  Carlson has ramped up his offensive production of late.  Over his last 17 games he has points in 12 of them and is 6-11-17, even.  That Caps are 9-1-2 in those 12 games in which Carlson recorded a point.  Carlson is 1-10-11, plus-6, in 26 career games against the Thrashers/Jets.

Winnipeg has been more hospitable than most road destinations for the Caps.  Washington has a 6-3-1 record in ten games in Winnipeg since the Jets moved there from Atlanta in 2011.  The odd part about this series in Manitoba is that four of the last nine games played between the teams ended in a shutout, the Caps earning three of them.  What makes this contest a bit different is that the Jets are coming off consecutive losses on home ice for the first time this season, last Friday in a 5-2 loss to the St. Louis Blues and Sunday in a 3-1 loss to the New York Rangers.  Winnipeg has not lost three consecutive games on home ice since last March when they lost to San Jose, Pittsburgh, and Calgary in consecutive outings.  Will the Jets’ string of 33 home games without losing three in a row come to an end?  What do you think?